When Dale stepped out of the limo, Clare revealed that she felt she had just met her future husband.

Fans who have followed The Bachelorette spoilers know that production will be shut down because Clare and Dale’s relationship will grow and develop fast over 12 days.

During the premiere episode, Clare told Blake Moynes that he was the only one who had reached out to her during the quarantine.

He had reached out to her after learning that her mother had fallen and broken her nose, something she shared on Instagram.

And while Clare seemed to confirm that she and Blake had talked, she didn’t confirm any pre-show talks with Dale.

Fans have a hard time believing this, as Clare was almost beaming when she saw him for the first time. She has already admitted to scoping out his Instagram profile prior to filming, so she knew who he was. 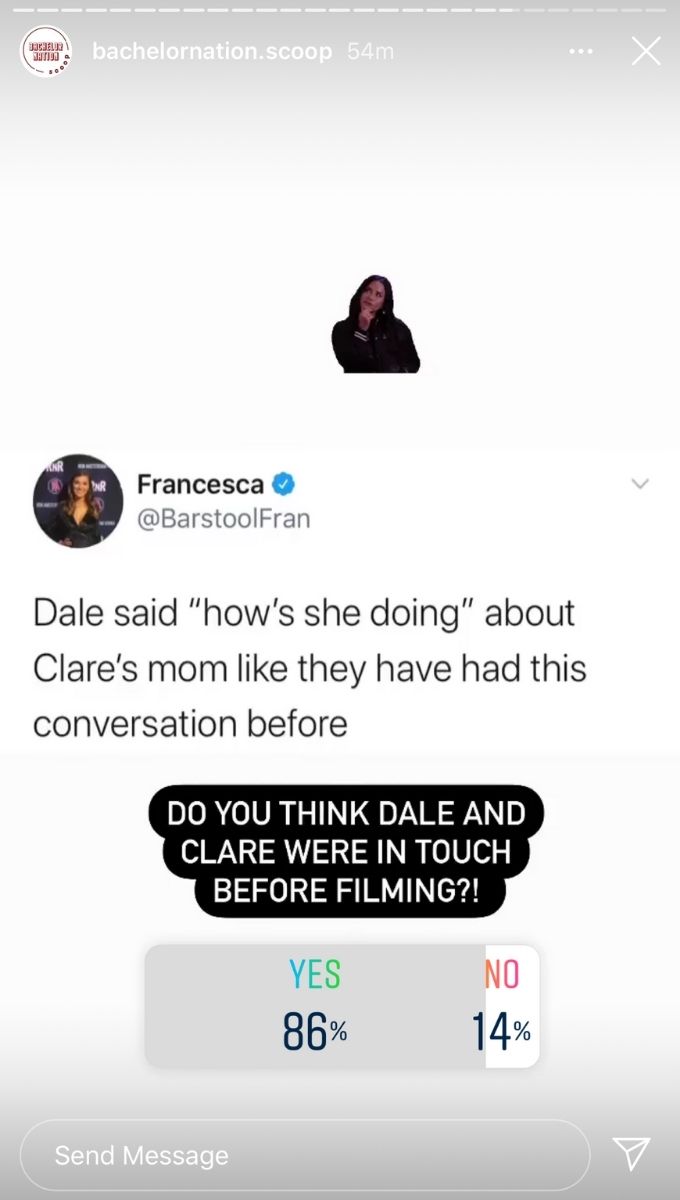 @bachelornation.scoop held a poll on its Instagram page, asking fans if they believed if Dale and Clare had talked prior to the show. On the poll, 86 percent of fans had said yes at the time of this reporting.

We’ve already reported on rumors that they were supposedly sexting each other during the shutdown, something that Reality Steve guessed as well.

In mid-August, Dale’s sister broke her silence, saying that she had been with him during the quarantine and there was no way that he was sexting anyone.

Right now, no one really knows what is going on between Clare and Dale. Some reports guess that they are engaged and they are going strong, even though she’s in Sacramento and he’s in New York.

Throughout the last couple of months, Dale has been active on social media on a daily basis, but when he stops posting for a few days, fans believe he’s with Clare, hiding out at a secret location.

There are also theories that Clare’s season will wrap up in three episodes, meaning we will have most of our questions answered before the Presidental Election on November 3, which means no Bachelorette episode on that day.

As for an After The Final Rose episode, it’s unknown how producers are going to handle it with Tayshia Adams taking over for Clare Crawley.

The Bachelorette airs Tuesdays at 8/7c on ABC.