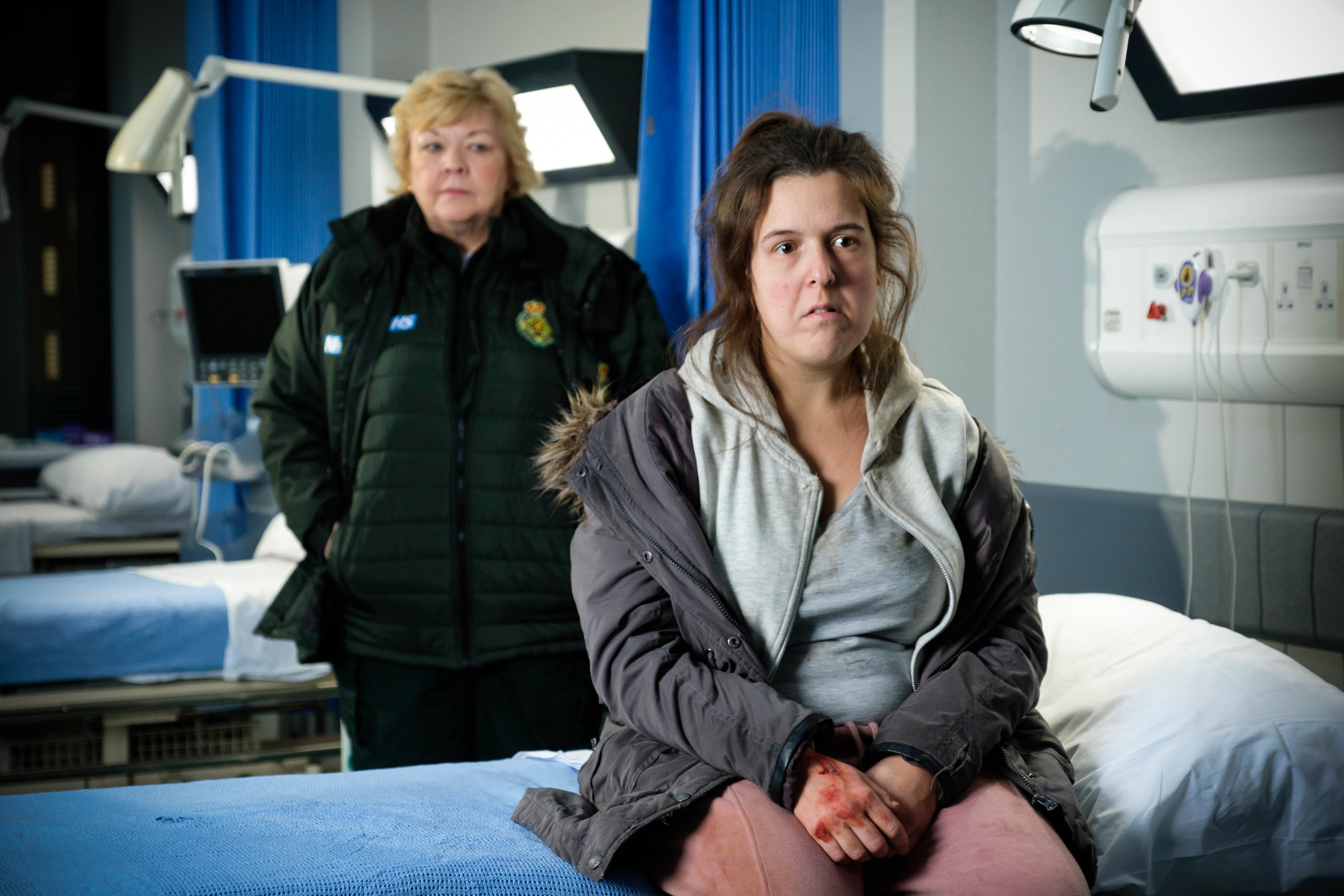 Guest star comedian Rosie Jones provided one of the main patient storylines for Casualty tonight, and a problem for Jan (Di Botcher) as she was faced with the question of how much you can help someone who doesn’t make it easy for you.

This doubled the stress of a situation that Jan was facing from another patient – her son Ross (Chris Gordon), who was in the ED after an incident at the prison where he’s currently serving a sentence for drugs and various other offences.

Over the years Ross has given Jan plenty of anguish, as her wife Ffion (Stirling Gallacher) was quick to remind her. He’s done some very bad things in his time, but still Jan feels guilty as a mother and that she didn’t do enough to help him. She got her chance to rectify that this week.

As it became clear that Ross had been suffering at the hands of his fellow prisoners, he admitted to Jan that they’d asked him to supply drugs. And, knowing his mother is a paramedic, Jan was one way that drugs could be obtained.

Jan could and should have walked away at that point, but the sight of Ross slamming his head into a wall because he couldn’t face the prospect of going back to the prison convinced her. ‘I’ll do it,’ she told him. ‘Whatever you need.’

Patient Paula (Rosie Jones) was also a part of Jan’s reasoning. Paula was a violent, chaotic drunk whom we first encountered smashing up a shop. But as we found out more about Paula we discovered that she was in a lot of pain both physically and emotionally, her mother having recently died. And she’d been failed by almost every support system that should have been protecting her. Jan offered to help her, but was distracted by Ross.

The next thing she knew was that Paula was back at the same shop, doing her best to get arrested because at least in custody she’d be fed and looked after. Jan tried to explain that she’d been distracted from helping Paula. ‘Something always comes up. You’re all the same,’ said Paula. So Jan was doubly determined that she wouldn’t fail Ross like she’d failed Paula.

Meanwhile, Lev (Uriel Emil) and Faith (Kirsty Mitchell) were doing their best to pretend all was well with their marriage – but Faith looks slightly less convinced than Lev, who doesn’t look all that convinced himself. Lev continues to be a big mass of angry insecurity where Dylan (William Beck) is concerned. This reached a peak when he overheard David (Jason Durr) and Dylan talking about a house Dylan is looking at. Lev assumed Dylan was hoping to be living in it with Faith and he got all shouty and angry like he does.

Faith had to go and calm him down, which meant she had to leave Marty (Shaheen Jafargholi) alone with a patient. He wants to step up to greater responsibilities so was shadowing Faith for the day.

She was supervising him patching up a patient’s cut forehead using glue, but while she was away the glue somehow ended up gluing the patient’s eye shut. This sounds more spectacular than it was and Jacob (Charles Venn) soon had the situation sorted out, but it hasn’t made Faith very popular with Jacob.

Last week Grace (Emily Carey) told Leon (Bobby Lockwood) she was a second year medical student (she’s actually only 16), before taking him back to Beauchamp Towers to have her wicked way with him. This was interrupted by Connie (Amanda Mealing), who made her feelings about the incident very clear to Leon.

‘I’m a little disappointed in her choice of men,’ she told him, warning him to stay away from her daughter. Grace is her mother’s daughter, though, and doesn’t take rejection lightly. After Leon ignored her texts and calls she turned up at the ambulance station to find him.

Grace is quite frightening, but not as scary as Connie and Lev, who also marked Leon’s card because of Grace being a ‘child.’ So Leon tried to dump her, but Grace informed him he couldn’t do that because she was dumping him first. That told him.

Sue Haasler is the author of five novels and the official BBC Holby City book, which you can read about here.

'Bridgerton': Here Are All the Modern Songs That Get Classical Covers

Sam Heughan on the End of 'Outlander' — 'What Is Life After Jamie Fraser?'