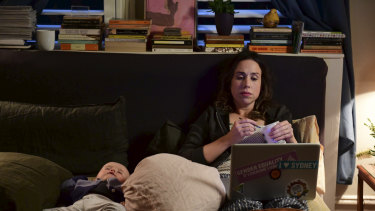 Many Australian women around 40 find themselves unprepared for the lifestyle shift that comes with a baby,Credit:

The freight train that can be new motherhood for a generation raised on boardroom dreams is fertile ground for scriptwriters. Alison Bell and Sarah Scheller's The Letdown, a runaway success story of the ABC's Comedy Showroom pilot season, is in good company with the likes of Sharon Horgan's BBC comedy, Motherland, Canadian series, Workin' Moms, and Charlize Theron movie, Tully.

Australian women who, often around the age of 40, found themselves unprepared for the lifestyle shift that comes with a baby, laughed and cried along with Bell's character, Audrey, as she stumbled through that first daunting year of breastfeeding and mother's groups. That American women could also relate to this specifically Sydney story, when the series launched this year on Netflix, was a happy surprise for Bell. Now living in Los Angeles with her partner and small child, Bell is in talks with Sharon Horgan's company, Merman, about other projects.

It's a sign that Americans are now open to Australian voices.

"We weren't confident that our humour would necessarily translate," says Bell. "We were overwhelmed at how it landed and at the interest here, and at the doors that it opened. It wasn't so long ago that a great idea from foreign shores would be re-cast for an American audience (see Kath & Kim and The Office). Bell credits the advent of streaming services with broadening tastes.

"We have a lovely audience at home, but more it's a sign that Americans are now open to Australian voices and that seems to be a relatively new thing. We're really benefiting from streamers like Netflix taking on work from their native countries and not turning them into American products. The imagery's so global now."

The second chapter in the lives of Audrey and her partner Jeremy (Duncan Fellows) sees them transition from parents of a baby to parents of an altogether more terrifying beast – a toddler. The first episode revolves around that middle-class milestone event, the first birthday party. All the fabulously flawed faces from season one are there: Sacha Horler's corporate mum, Ester; Celeste Barber's bogan mum Barbara; Lucy Durack's bimbo, Sophie; Leah Vandenberg and Xana Tang's lesbian mums. And happily, the services of stern maternal and child health nurse, Ambrose (Noni Hazlehurst), are still required.

"There's so much material when you delve into this territory. We were very excited to explore more."

Along with the wry humour and the awkwardness for which Audrey is loved are some pretty heavy themes.

"People talked about enjoying it as a comedy but what I found striking were some heartfelt messages from women when they saw themselves in the darker moments of the show. We had a responsibility to keep doing that. That was the agenda with season one – to tell the truth, and the truth can be quite dark. Comedy is far more important than perhaps the industry thinks it is. It gives people some relief from the hard stuff. I hope we got that balance right. I hope people keep laughing."