From Ariana Grande’s “thank u, next” to Taylor Swift’s “Wildest Dreams” 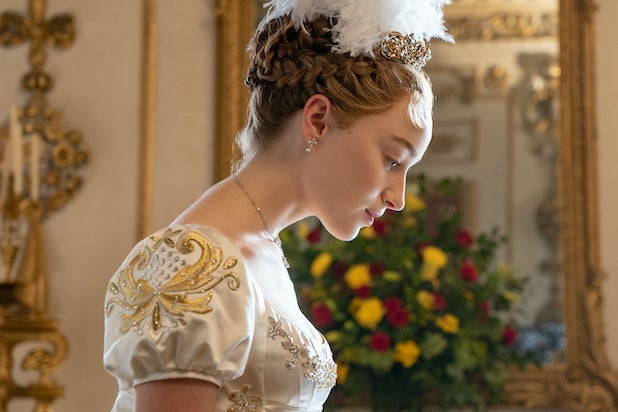 It might be a little hard to put your finger on exactly what song you’re listening to, as the “Bridgerton” covers truly make these pop tracks sound like they were made for string quartets. But don’t worry, because TheWrap has the complete soundtrack listing for all the covers below.

Based on Julia Quinn’s romance novel series of the same name, “Bridgerton” follows Daphne Bridgerton (Phoebe Dynevor), the eldest daughter of the powerful Bridgerton family as she makes her debut onto Regency London’s competitive marriage market. Hoping to follow in her parents’ footsteps and find a match sparked by true love, Daphne’s prospects initially seem to be unrivaled. But as her older brother begins to rule out her potential suitors, the high society scandal sheet written by the mysterious Lady Whistledown (voiced by Julie Andrews) casts aspersions on Daphne. Enter the highly desirable and rebellious Duke of Hastings (Regé-Jean Page), committed bachelor and the catch of the season for the debutantes’ mamas. Despite proclaiming that they want nothing the other has to offer, their attraction is undeniable, and sparks fly as they find themselves engaged in an increasing battle of wits while navigating society’s expectations for their future.

The series was created by Chris Van Dusen who also serves as showrunner on the eight-episode drama. Van Dusen executive produces along with Shonda Rhimes and Betsy Beers, under their Shondaland banner for Netflix. Directors include Julie Ann Robinson, Sheree Folkson, Tom Verica and Alrick Riley.

Here are all the songs that get classical covers in “Bridgerton”:

If you want to own any of these, you’re in luck: Lakeshore Records has released two soundtracks for the show, one for the covers, which you can find here, and the other for its original music, written by composer Kris Bowers, which you can purchase here.