Giraffes and tigers and car bombs — oh my! “Briarpatch” sure does offer an unusual combination of TV rarities in its first hour, and barely slows down in the second. Adapted from Ross Thomas’ 1984 Edgar Award-winning novel of the same name, Andy Greenwald’s adaptation is actual a pretty cool combination of genres — like a neo-noir western with more Martin McDonagh than Nic Refn. Each element plays well off each other in what’s otherwise a sleepy small town murder-mystery, and the resulting oddities — like a zoo-full of animals unleashed across Texas, or Jay R. Ferguson sporting a good ol’ boy drawl — feel like marvelous side effects of such a fervent blending of styles.

But it’s not the easy-to-follow core story that keeps things clicking, nor even Rosario Dawson’s dominant lead performance. It’s Ana Lily Amirpour. The executive producer and pilot director’s unique skillset is maximized so beautifully in the first episode, it’s as though Greenwald (if not Thomas before him) built the story just for her. What results is a distinctly enjoyable visual experience that wanes slightly in hour two, but still sets up a slick, colorful, one-off anthology season that could very well be worth the 10-hour investment.

Meet Allegra Dill (Dawson). Called back to her hometown to identify the body of her assassinated sister, Dill is far from your woebegone and grief-stricken sad sack — she’s pissed, looking for answers, and absolutely unwilling to take any of her former townsfolk’s shenanigans. And she’s got a lot of former townsfolk. “Briarpatch” quickly introduces one strange, suspicious character after the next, building a whodunit filled with eccentric personalities.

There’s A.D. Singe (Edi Gathegi), her sister’s reasonable lawyer who offers Dill welcome assistance before unconsciously slipping into a French tongue later on. There’s Gene Colder (Brian Geraghty), a dim cop who worked with Dill’s sister on the force (and maybe more). There’s Cyrus (Charles Parnell), a tall, meticulous, and loyal lackey for Dill’s employer, a two-timing Senator, and then there’s a childhood friend of Dill’s who grew up poor but has retired in his early 40s to a life of luxury after working covert government jobs for two decades. There’s a limping ex-boyfriend, a loud-chewing old bastard, and, at some point, Alan Cumming is going to show up. 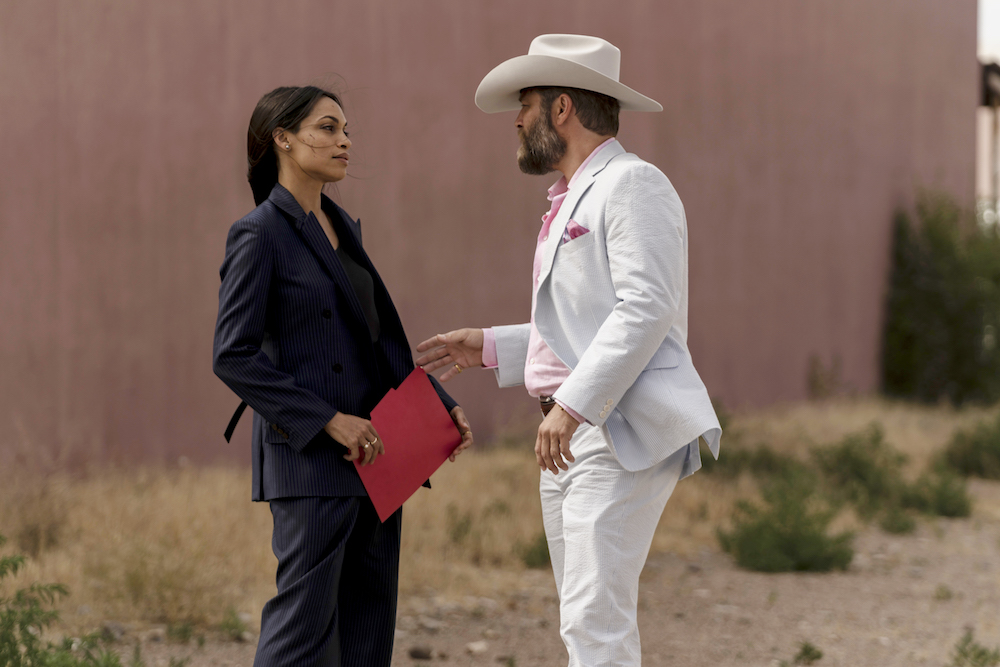 “Briarpatch” is filled with oddities, but it never strays too far from its purpose: Dill is going to find out who killed her sister, and if there’s more dirt to uncover in this double-dealing little town, then so be it. The drive for satisfaction, if not quite revenge, gives the series a comforting familiarity among all the idiosyncrasies, and only time will tell if the series can be as creative within its story as it is in constructing it. Given the source material, odds are high this will be a solid update on an old narrative, but there’s still potential for more.

Now, let’s talk about Amirpour. The director of Sundance favorite “A Girl Walks Home Alone at Night” and indie winner “The Bad Batch” has been having a grand time on TV with memorable stints on “Legion,” “Castle Rock,” and “The Twilight Zone.” Each of these gave her certain creative freedoms: The now retired FX superhero story thrived on visual inventiveness and Jordan Peele’e episodic revival relied on directors to set a visual tone for their standalone entries. And here, in just an hour’s work, Amirpour maximizes so many trademarks within her exciting young career — she captures “Briarpatch’s” dry Texas wasteland not unlike that in “The Bad Batch.” With Dill, Amirpour has another displaced yet resourceful woman leading the way, and through Greenwald’s combination of genres, she designs a well-defined new playground by marrying neo-noir aesthetics with western motifs.

The red neon lights pop even brighter in the dark, windowless hotel hallways Dill roams. Once inside her room, the ornate archways double as framings within framings, narrowing the viewers’ focus and creating a feeling that she’s boxed in, or put in her rightful place. Outside, you see the world as she sees it, whether it’s an ugly old man gnashing and slurping his way through a feast, or a majestic giraffe bending down for a scratch, perhaps to prove to her it’s really there. Amirpour creates tension in her set-ups and knows when to step in with an extra flourish (usually when we’re deeper within Dill’s P.O.V.), but she also can pull back and let the production design, dialogue, and story do the work that must be done.

“Briarpatch” isn’t a knockout — much of the fun is in the discovery; in seeing the weird things emerge, not return. When characters are called back to recreate that initial strangeness, things get a little watery. Dawson’s Dill and Ferguson’s Spivey spark right away, hinting at a depth of character many of the supporting cast members don’t have (though there’s always something to love about Kim Dickens as a fiery boss). How much the series relies on the right people will determine how long viewers stick with it, but if Amirpour’s eye can be replicated, or her ingenuity felt beyond her own episodes, then there’s plenty of wonder left.

“Briarpatch” premiered at the 2019 Toronto International Film Festival. The first season will debut in early 2020 on USA Network.