Behind Her Eyes follows the lives of couple David (played by Tom Bateman) and wife Adele Ferguson (Eve Hewson) who have a strained relationship. They both find comfort when they separately meet Louise (Simona Brown) but it is a dangerous game when you get in the middle of a marriage as she quickly finds out. The Netflix drama is filled with plenty of intimate moments which showcase the dynamic between the three.

WARNING: This article contains spoilers from Behind Her Eyes.

Which sex scenes is the Behind Her Eyes intimacy co-ordinator most proud of?

In the first episode of Behind Her Eyes, subscribers get a taste of the awkward relationship between David and Adele.

As she tries to seduce him, David reluctantly gives in and there is an intense sex scene where she says she loves him and her husband doesn’t respond.

There is then a shift in the scene where the camera goes from one end of the mattress to the other and the next thing viewers know, it’s gone from the evening to the following morning.

When talking about her favourite sex scenes, Behind Her Eyes’ intimacy co-ordinator Ita O’Brien said this was one of the best.

O’Brien explained to Express.co.uk: “The scene in the first episode, we were going ‘yes!’

“It’s juicy, it’s fun and I loved it because we had the intimate content, the detail of that and then [it went] from night to day.

“That felt like a really exciting moment when setting up and there were a couple of those, back when they [David and Adele] were young in Scotland.

“That again was another one on the track that goes around, so those things that are complex but you nail it and everyone feels like they’ve got something really special.” 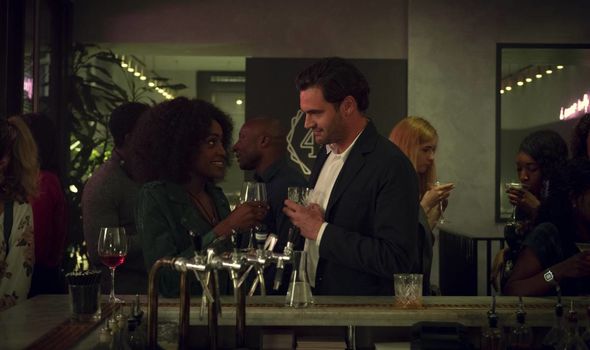 Another key moment for O’Brien is when David and Louise are having sex on the sofa in her flat.

Once again, this is because of the unique camera angles used where viewers get to see what’s happening from a birds-eye point of view.

O’Brien said: “One of the many things that I loved about this was the voyeuristic aspect of all the intimate scenes.

“So it sometimes meant that you would have a scene and they would want to have a camera roving up and that’s what made it challenging.

“You had the scene and then it’s about where you shift the bed, where you shoot it all. “

O’Brien continued: “It’s this image that you’re always being watched and that was an added aspect of this production which I loved.

Another key moment in the series for O’Brien is the dream sequence where Louise and David are having sex in her childhood bedroom.

She added how actors Brown and Bateman “nailed it”, during this performance.

Netflix’s Behind Her Eyes is based on the book of the same title, written by author Sarah Pinborough.

The novel came out in 2017 and the streaming service gained the rights for it a couple of years later.

The release date could have been in 2020 according to Pinborough but thanks to the pandemic, the show’s premiere was delayed.

As of yet, there is no talk of a second series of Behind Her Eyes.

Behind Her Eyes is available to watch on Netflix.