“At first I think I came on really strong. I did some questionable things I wouldn’t do anymore,” Plaza admitted of working with Academy Award winner De Niro (via Variety). “I didn’t really have a relationship with him off-camera because he’s him. I didn’t have time to get to know him. He shows up in a puff of smoke, and there’s no chatting at the water cooler.”

Plaza continued, “By the time he’d show up, I’m in character. My character had one goal: To have sex with him. I was acting totally insane as the character because we were about to shoot. I don’t think he understood that wasn’t me. You’d think he would because he’s an actor and an amazing one.”

Plaza noted that one of her agents “heard Bob’s a little freaked out” by her on set at the time and that later in production, De Niro hosted a luncheon for the cast and crew and didn’t recognize Plaza outside of character.

“I showed up, and he’s like, ‘Who are you sweetheart?’ and after that he was normal,” she said.

The “Spin Me Round” actress previously told IndieWire’s Eric Kohn during a Q&A that the audition process for “Dirty Grandpa” inspired her to actively combat typecasting. 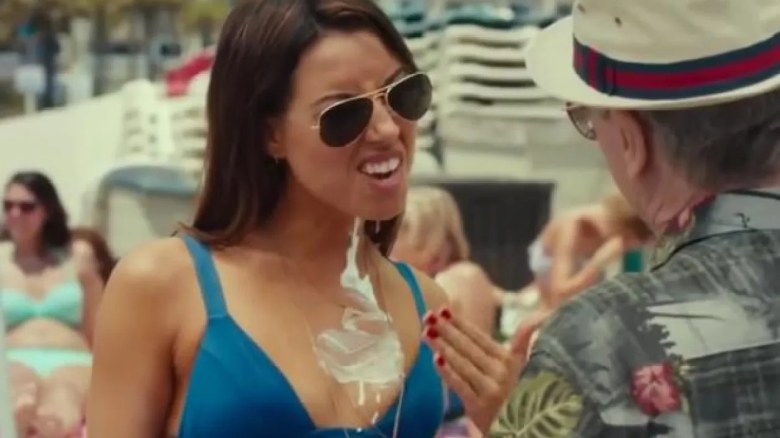 “The part they wanted me to audition for was the other [female] part, which was probably more in line with who I should have been,” Plaza said earlier this year. “But I was like, ‘No, I want to audition for the blond-haired, big-breasted promiscuous person that wants to have sex with an old man,’ or whatever the description was. But it was definitely on the page like, ‘No, you would never…’ And I got that part because I was like, ‘OK, I’m going to do my own twist on this.’”

The “Ingrid Goes West” star revealed that such typecasting “fueled” her to surprise audiences.

“It gave me motivation to prove myself,” Plaza said. “I think, for a while, I did feel like, ‘Aw man, I’m being put in a box, and I don’t like it, so I’m going to fight to get out of that and show people what I can do,’ or something. But then I started to look at it as a gift. If I convince people so well that I was that one thing and then I do something that’s totally different, it will be that much more satisfying to surprise them. So I started to try to think of it like that and be a little bit more positive and less bitter about it.”

And Plaza’s dedication to her roles extends beyond genre.

“I actually don’t feel like I’ve done a comedy in a while,” Plaza said. “I don’t really approach them any different. To me, if it’s a comedy or a drama, I have the same process that I go through, and the audience can decide if it’s funny or not.”

Why Mentorship Is the Key to Your Success (Sponsored)