Many movies arrive with dreams of a franchise, but “Army of the Dead” lands on Netflix with one already intact: Zack Snyder’s stylish and gory zombie action-thriller hits the streamer with two prequels already in the queue, 2022 anime series “Army of the Dead: Lost Vegas” and a standalone feature, “Army of Thieves,” based around Mattias Schweighöfer’s kooky safecracking character that’s already finished and coming out later this year.

“Army of the Dead” covers a lot of plot in its staggering credits sequence, when the walking corpses are battled and trapped in Sin City by a team of mercenaries. It’s clear that Snyder envisioned quite the complex timeline leading up to the gory heist at the center of his movie. But for all the intrigue surrounding where these undead came from and what happened earlier in the timeline, “Army of the Dead” also ends on a cliffhanger that sets the stage for a sequel. So far, nothing on that front has been announced, but the next chapter of this young zombieverse has the potential to be groundbreaking if Netflix plays its cards right.

Consider the setup. (And yes, this is where the spoilers start.)

In its closing moments, “Army of the Dead” goes global. Vanderohe (Omari Hardwick), one of two apparent survivors from an operation that falls very short of success during the preceding two hours, survives the Vegas nuclear blast, thanks to a last-minute decision by Schweighöfer’s character to lock Vanderohe in a vault with millions of dollars. Vanderohe emerges from the wreckage with a cash-filled backpack, wanders through the scorched-earth landscape, and charters his own jet to take him out of the country. It’s only once the plane takes flight and he attempts to celebrate a new beginning with a boisterous champagne toast that disaster strikes. Vanderohe feels woozy, heads to the bathroom to clear his head, and notices a zombie bite on his arm — just as the plane begins its descent into Mexico City. Roll credits!

The implications could not be clearer. For the entire movie, the zombie outbreak was limited to a single location. But with Vanderohe now spreading the disease south of the border, one can assume that the undead will soon overtake Mexico just when the entire globe assumes the disease has been eradicated for good. It’s a wrenching outcome, one that could lead to real-world parallels in the way border security has caused harrowing xenophobia in the U.S., as well as the domestic challenges that Mexico faces with violence on a regular basis. Imagine an “Army of the Dead” sequel rich with metaphors about the immigration crisis and the cartel wars, with zombie warriors that accentuate those problems in a whole new way. 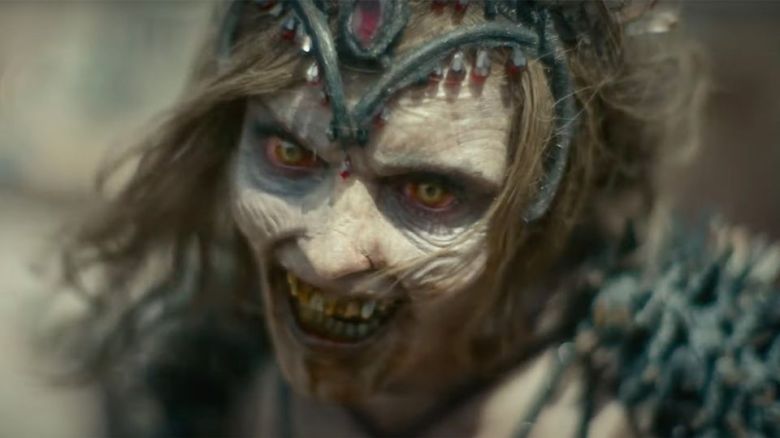 “Army of the Dead”

More than that, imagine an “Army of the Dead” sequel in Spanish. It’s quite possible this idea has already been discussed, as Netflix has already shown interest in internationalizing its franchises. “Army of Thieves” is set in Germany and will reportedly include German and French scenes in addition to English. In March, Netflix announced plans to produce a Spanish language sequel to its surprise hit “Birdbox,” directed by Adrián Guerra and Núria Valls, who will make their directorial debuts. That project, set to shoot in Spain this year, supposedly has been conceived as a kind of spin-off set in the “Birdbox” universe, and there could be other international spin-offs in the works.

But that’s different from the prospects of a Mexican “Army” movie that serves as the direct sequel to a major tentpole. It could upend the nature of blockbuster filmmaking and the assumption that those audiences are best-served by English-language content, pushing escapism into new territory that most studios would never touch.

Netflix has made tremendous strides with its Latin American audiences in recent years, with around 19 percent of its subscribers hailing from that part of the world. The streamer first took root in numerous Spanish-language countries almost exactly 10 years ago, before its original content ambitions had even taken flight. The company has seen particular success with Spanish-language genre series like “Money Heist,” “Narcos,” and “Elite.” It’s safe to assume that plenty of the audiences who consume those shows will also watch “Army of the Dead,” a true summer movie escapist experience basically guaranteed strong numbers on the service. It delivers the goods as well as any “Fast and Furious” movie, with the added bonus of bloody thrills. A Mexican “Army” follow-up would work wonders for 32.4 million subscribers who wouldn’t see it as a “foreign language” movie because it would speak their language.

Additionally, a Mexican “Army” sequel would provide Netflix with the opportunity to experiment with the very idea of franchise-building for a global audience. Usually, the assumption is that Americans won’t watch anything with subtitles, and anything from abroad has to be translated into English-language terms. (Hence recent Danish Oscar winner “Another Round” getting the Leonardo DiCaprio treatment.) In this case, Netflix — which certainly has proven that it can take on costly risks — would essentially force even audiences who recoil at the idea of subtitled movies to give them a chance. Want to see the latest installment in your new favorite series of movies? You’ll have to overcome, as Bong Joon Ho famously put it, “the one-inch tall barrier.” And then anything is possible. Open the floodgates for movie series that can travel across multiple countries and cultures, traversing linguistic barriers that shouldn’t matter in the first place, and so many more storytellers will find new opportunities.

And there’s no shortage of Latino talent who could get the job done. As the hype around the upcoming release of “In the Heights” makes clear, audiences are starved of Latino content told on a major cultural scale. This is the ideal opportunity to lean into that.

Directors with experience in the horror genre, like Jayro Bustamente (last year’s Oscar-shortlisted “La Llorona), Adrián Garcia Bogliano (“Cold Sweat,” “Penumbra”), or Gigi Saul Guerrero (“Culture Shock,” “El Gigante”) could work wonders with Snyder’s “Army” sandbox. Cuban director Alejandro Brugués already aced a Spanish-language zombie concept with “Juan of the Dead” in 2011 and could certainly find a fun way in. The fantastical “Tigers Are Not Afraid,” from filmmaker Issa López, shows the potential to take the “Army” franchise in more of a supernatural direction. Perhaps Netflix could call up Spanish auteur Alex de la Iglesia, who has been making chilling and innovative Spanish-language horror films for nearly 30 years. Whoever it takes, Netflix could certainly turn to Guillermo del Toro, whose “Pinocchio” will be released by the streamer this year, for advice.

A Spanish-language “Army” sequel wouldn’t have to give up on the characters of the previous movie, either. One of the more endearing figures in Zack Snyder’s movie is Mikey Guzman (Raul Castillo), the overconfident sharpshooter who becomes an internet star for his incredible ability to nail zombies with uncanny accuracy from afar. Yes, Mikey sadly bites the bullet by his own hand as the survivors make their way through the casino and the zombies swarm in, but all you’d have to do is invent a twin brother for the guy and boom: Instant opportunity to get back in business with one of the most exciting and versatile Latino actors working today. (Compare Mikey to the characters Castillo played on HBO’s “Looking” and Guy Ritchie’s “Wrath of Man” to get a sample of his range.)

But if the main business driver behind “Army of the Dead” stems from, according to the Wall Street Journal, “Netflix’s franchise problem,” then it should consider taking a stab at building out Snyder’s world in a way that takes franchises in a whole new direction. As “Get Out” proved, socially-conscious horror with its finger on the pulse of underrepresented audiences can go a long way. “Army of the Dead” provides the ultimate opportunity to keep that momentum alive.

“Army of the Dead” is now streaming on Netflix.