“Archer: 1999” is very much what “Archer” has been for the past three seasons and change: filled with lush visuals, quick wit, and inventive, genre-inspired storytelling. Paying homage to everything from “Alien” to “Arena,” the 10th season of Adam Reed’s animated action extravaganza travels to the final frontier in search of more material to spoof. It finds plenty through four episodes, yet the best means to asses where “Archer” stands in 2019 — and where it can go next — is through one of its original characters.

Pam Poovey is bigger than ever in “Archer” Season 10, even if she’s not exactly Pam Poovey anymore. Over the years, Pam (impeccably voiced by Amber Nash) has morphed from a crying HR rep into an underground street fighter, and further still into an ideal partner-in-crime (and/or partner-in-law, if you’ll excuse the phrasing) for the world’s greatest spy/outlaw/dreamy-coma-patient, Sterling Archer — she’s a coke-eating, drink-guzzling horndog who’s also a full-fledged field agent. Talk about a perfect pair.

Because of these savvy changes, Pam has also been an ideal benchmark for creative growth, and as Reed keeps pushing his FXX animated comedy to new creative heights, she’s been leading the charge each and every season. Pam’s predominance has become even more apparent since Archer shifted format to become a seasonal anthology, and this brings us back to Season 10, “Archer: 1999” and the introduction of Pam’s alien dream persona known simply as Pam.

I’m not really sure what Pam is this year — I’m actually more sure, if not certain, that we’re not supposed to know what she is beyond a big, strong, alien creature with the same jovial personality and love of crude jokes that have always been ascribed to Pam. She looks like a cross between Clayface and Groot, but with softer features and Nash’s charming intonation. 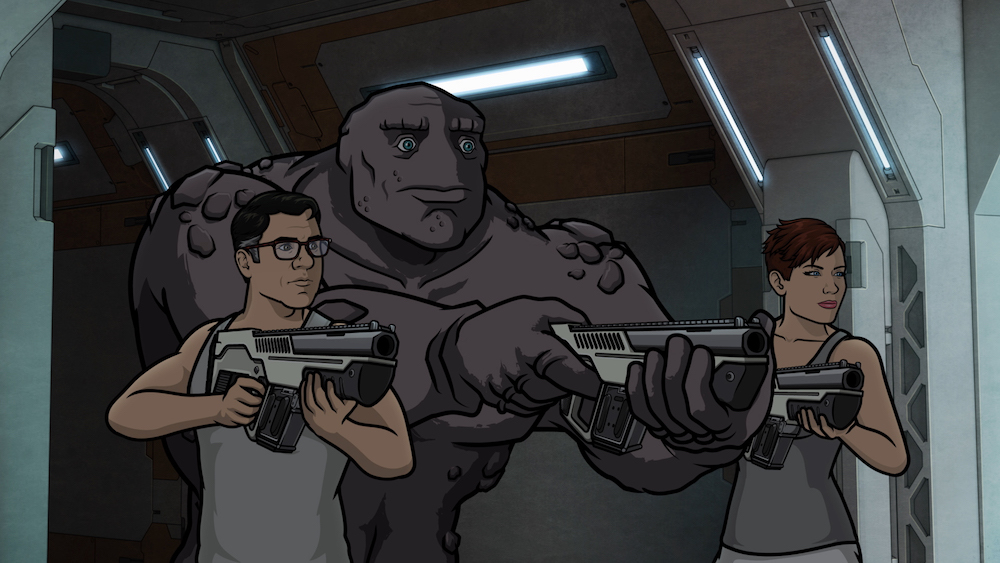 Similar to past seasons, each profession lines up with pre-established character traits, as Archer’s latest dreamworld conforms to the reality he’s come to know (which also helps satisfy fans who’ve come to love each character for who they are). So when Cheryl turns out to be an amazing pilot who would rather shoot down her own ship than the enemy’s fleet, it comes as no surprise but still plenty of chuckles. Same goes for Krieger’s mad scientist whims, which peak when he gets to study dozens and dozens of alien eggs that his crew can’t stop eating.

The cast dynamic remains a series’ strong suit, and yet Pam is still a stand-out. Reed, who wrote the first two episodes, acknowledges her crazy new form (and fan appeal) by introducing her via a sitcom punchline. As Cheryl complains about the ship’s smells following a lengthy stay in hyper-sleep, Pam appears in the doorway, quipping, “Did somebody say ‘pants’?” As canned audience laughter fills the ship (presumably from Mother’s CPU), Pam walks over to her colleagues and finishes her thought: “Because I’m not wearing any.”

More meta breaks pop up with Pam in future episodes, like when she tries to end the episode by looking into the camera for a “freeze frame” outro while Archer looks over her shoulder in bewilderment. From her new species to these mysterious abilities, Pam offers Reed the opportunity to play around. He can do anything he wants with her, really, and he takes advantage consistently, if not overwhelmingly. There’s plenty more that could be done with and through the character, if Reed ever decides to blow up the “Archer” model entirely. 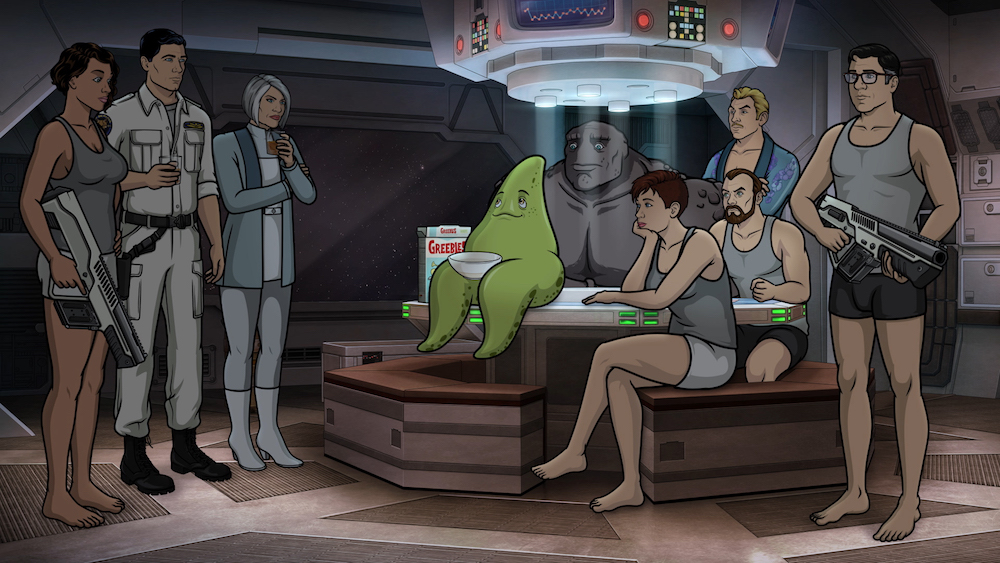 Which leads us to the future: “Archer: 1999” is another strong entry in an ever-developing series. The animation is stunning, as the shortened episode order (eight instead of 10) and release delay (FX has been giving the team an extra month or so for the past three seasons) accommodate brand new set and character designs, not to mention some snazzy VFX during the various space battles. The timing and jokes are still right on point. The episodes even jump quickly between genre staples, with one episode showing Archer & Co. chasing an escaped, face-hugging alien around the ship and another showing them squaring off in an intergalactic gladiator match. (Kudos to Sam Richardson for bringing easygoing humor to a green pile of goo.)

Clearly, Reed could keep doing this kind of thing for years to come. Whether it’s digging up Bible stories or making more movie homages, “Archer” has shown it can adapt and succeed in virtually any environment. But can it go even further? And does Reed want to? At some point, he’ll have to come back to reality and tell fans whether the real-world Archer lives or dies, but until then — or even after — he could crash these new worlds into each other. Ripped, 1930s Pam from “Danger Island” could team-up with alien Pam from “1999.” P.I. Poovey could take a trip through time to join forces with the modern day, O.G. Poovey at The Figgis Agency.

The point is there’s so much more to pull from Pam, just as there’s so much more that can be pulled from “Archer.” Season 10 is, as of now, the last season FX has picked up. They could order more, sure, or it could end after a decade of amazing storytelling. Really, either path makes sense. Reed is as talented at world-building as he is dialogue, and if he wants to start over anew, whatever’s next will be worth watching. But there’s more gas in the tank for “Archer” — Pam is the proof. Reed has unearthed so much fertile ground in her various personas, she could carry her own spinoff by now. That’s an option, too; an extreme deviation from what’s come before, but an option nonetheless. Right now, “Archer” is flush with choices, and the only definite one is to keep watching.

It's October 1, Time For $5 Horror Movies