And then there were 24. American Idol on Monday officially narrowed down its pool of talent, bringing viewers one step closer to actually having a say in who gets to move forward — which is good, because the judges made some truly questionable calls throughout this process.

Picking up where Sunday’s episode left off, Katy Perry and Lionel Richie delivered the news to Alanis Sophia and Casey Bishop that they’re both going through to the Top 24, which came as a shock to absolutely zero people watching from home.

That left 12 spots open in the Top 24, which went to the following singers:

* Willie Spence, 21, was another shoe-in. The judges had already fallen in love with his “innocence and honesty,” and that was before he blew the roof off the Dolby Theater with his powerful rendition of Beyoncé’s “I Was Here.” Bryan could barely contain his excitement throughout the performance, while Lionel Richie didn’t even bother concealing his, enjoying a full-on religious experience in the Lionel’s Den.

* Mary Jo Young, 19, wasn’t as much of a sure thing, given her history of fumbling lyrics under pressure. But there were no fumbles in her mature, dramatic performance of James Bay’s “Us,” lyrical or otherwise. To think that Young had never shared her gift with anyone (in person) before auditioning for Idol is wild. She’s gone on a journey, and it’s not over yet.

* Hunter Metts, 22, clearly suffers from crippling self-doubt. That’s the only possible explanation for him thinking he isn’t good enough to be here, when anyone with working eyes and ears can confirm he’s exactly where he’s supposed to be. Knowing that he needed to take a risk this week, he came out swinging — softly, of course — with a beautiful cover of Noah Cyrus’ “July.” (Side note: Is it rude to point out that someone is even hotter when they cry?)

* Grace Kinstler, 20, wasn’t confident about her decision to sing “Father” by Demi Lovato — and the judges certainly agreed — but she also couldn’t ignore her personal connection to the song, which she dedicated to her own father. Though the judges acknowledged that this wasn’t her best performance, they know what her best looks like, so they pretty much sent her through on merit. We’ll consider this Kinstler’s one free pass.

* Deshawn Goncalves, 20, did everyone proud — his family, the judges, even the ghost of Judy Garland — with a gorgeous performance of “Over the Rainbow.” 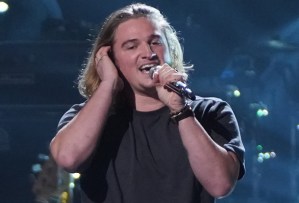 * Colin Jamieson, 22, shed what remained of his boy band roots with a dynamite performance of Fall Out Boy’s “Sugar, We’re Goin Down.” What began as an exquisite, stripped-down arrangement abruptly shifted into a high-energy experience, one that had Perry rocking out in her seat. This was an unexpected delight.

* Ava August, 15, was another contestant sent through on her merits, as they didn’t think that her Showstopper pick — an original song called “Ghost of You” — was quite ready for the stage. Still, they couldn’t deny that voice, especially at such a young age, sending her through to the Top 24.

* Liahona, 16, knew she needed to kick things up a notch after being read for filth by Perry during the Duets round. Once again picking a difficult, heavily produced pop song (Meghan Trainor’s “Me Too”), Liahona made the most of every second on stage, ending her performance with a crowd-pleasing split.

* Madison Watkins, 25, went into her performance of James Brown’s “It’s a Man’s Man’s Man’s World” fully determined to give it her all — and she did. Some of those high notes were so good, they made my stomach drop. (I should probably have that checked out, actually.)

* Alana, 22, dedicated her performance of Jazmine Sullivan’s “Bust Your Windows” to anyone who, well, has ever wanted to bust someone’s windows. And she busted the heck out of this song, in turn busting her way into the Top 24.

* Anilee List, 20, sailed through to the Top 24 with her confident, funky delivery of Rufus and Chaka Khan’s “Ain’t Nobody.”

* Cecil Ray, 20, was the final contestant to be sent through, courtesy of his touching take on Leon Bridges’ “Beyond.”

Sadly, there were nearly as many fan favorites who didn’t make it to the Top 24, including a few that had me yelling at my TV. And my computer. And pretty much any other screen I could find. 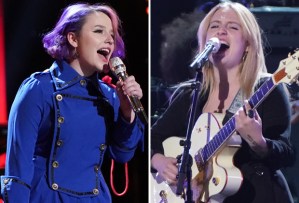 Monday’s episode said goodbye to EmiSunshine, 16, whose performance of Janis Joplin’s “Another Piece of My Heart” didn’t feel “authentic” enough for the judges; Lizzy O’Very, 20, who didn’t embrace the freedom of the stage as much as she needed to; Camille Lamb, 22, who believed she was the “full package” with her take on Bad Company’s “Feel Like Making Love”; and Althea Grace, 21, whose story of motherhood touched the judges’ hearts… just not enough to send her through.

This two-hour event also marked the end of the road for Ronda Felton, 19, and Funke, 28, who were fresh off a frightening ordeal in the Duets round; Laila Mach, 15, who was told that her elimination was a matter of “timing” vs. talent, which made very little sense to me; and Drake McCain, 19, who impressed Bryan with his take on “Country Girl (Shake It For Me),” though not enough to keep him in the running.

But the elimination that truly burned my biscuits this week was that of Nia Renee, 17, who left everything on the stage with her performance of Sam Cooke’s “A Change Is Gonna Come.” An immensely talented singer, Renee also commanded the stage in a way that few other contestants have. I don’t want to say that her elimination was an outrage, but… it was kind of an outrage.

Who will you be rooting for on Sunday? And which of Monday’s eliminations left you fuming? Drop a comment with your thoughts on the “Final Judgment” results below.

Felicity Kendal, 74, hasn't aged a day since The Good Life 35 years ago as she appears on Graham Norton's chat show

Mel B BANNED from taking daughter, 8, to UK for Christmas after ex argues girl was left ‘traumatized’ from last visit – The Sun