GMB: Piers Morgan walks off after clash with Alex Beresford

The former Labour MP will joined Susanna Reid who has been joined by a roster of presenters since Piers Morgan announced he had quit his role on Good Morning Britain. Alastair shared a snap of himself visiting the set of the morning show as he prepares for his presenting stint.

“So weird to be wearing suit and tie. Been in at @GMB checking the presenter chair and seeing if I can cope with the tech,” he told his 694,000 Twitter followers.

“And no I am NOT the new @piersmorgan BUT I will be presenting alongside @susannareid100 May 10-12 thru Mental Health Awareness Week.”

Alastair continued: “In addition to usual news, views and interviews hoping to draw attention to MH Issues which GMB have long championed.

“But also keen to get stuck in on all the big political stories post May 6 elections. No piano! Wish I’d been on this a.m!#johnlewisnightmare #Nolan #wallpaper.” 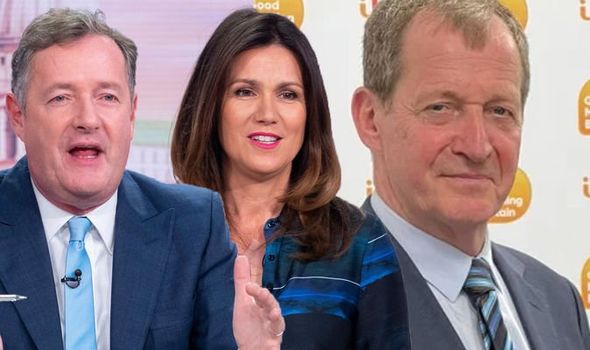 Alastair was inundated with support from his followers, with one replying to his tweet: “Brilliant! Nice to see a new face in the chair on @GMB… will look forward to it!”

“Yesss, you’ll be great! Looking forward to it #GMB,” a second shared as another continued: “OH NO!! Now I may have to watch ITV.”

Someone else posted: “Excellent news..Susanna will help you through so don’t worry. Look forward to seeing you & your take on mental health will be very relevant,we’ve all had ours tested recently!

“These discussions help many, nothing should be out of bounds which is what GMB does better than most.”

Alastair has revealed he is excited to be taking on the role of host but isn’t so keen on the early morning wake up call.

He told Mirror Online he is “flattered” to be hosting during Mental Health Awareness Week.

“I am also looking forward to getting stuck into the big political and social issues at such an important and difficult time for the country, as well as brushing up my knowledge on some of the subjects that will take me out of my comfort zone,” he told the paper.

However Alastair said he is “totally dreading” getting up so early int he morning.

He added: “But I am really looking forward to it.”

It comes after it was reported Richard Madeley was being lined up for a summer stint on GMB to see if he would be suitable to replace Piers long-term.

“Piers is nigh-on impossible to replace and GMB execs accept this, but Richard has his own inimitable style,” an insider told The Sun.

“Like Piers, he’s a trained journalist who knows how to press guests and get a decent ‘line’ from interviewees.

“He shoots from the hip, says what he thinks, and is a genuinely brilliant, likeable chap off air — so it’s very much a ‘watch this space.’”

Fans of GMB will just have to wait and see if bosses decide to ask Alastair to stay on as permanent presenter or if Richard takes over the hosting role.

Good Morning Britain airs weekdays on ITV at 6am.

'Riverdale': Did The CW Show Just Pull its Most Bonkers Stunt Yet?

Felicity Kendal, 74, hasn't aged a day since The Good Life 35 years ago as she appears on Graham Norton's chat show