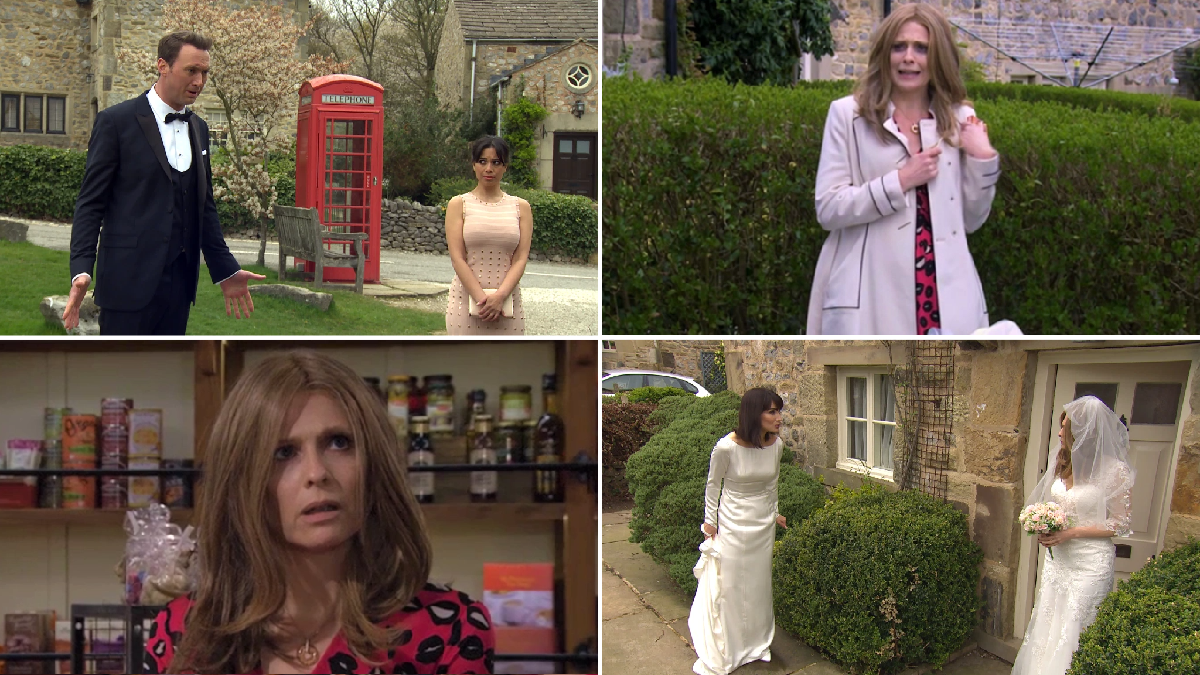 Bernice Blackstock’s (Samantha Giles) return in Emmerdale has been about one thing – getting Liam Cavanagh (Jonny McPherson) back.

With her head in the clouds, Bernice tried and failed many times to win Liam back and things certainly escalated tonight.

As Leyla’s (Roxy Shahidi) wedding preparations began, she was certain she’d end up experiencing some bad luck thanks to Bernice and well, didn’t she just!

With Leyla and Liam finally tying the knot, we’re taking a look at five of Bernice’s most iconic moments from what was a very bonkers episode of Emmerdale:

‘I think I may have left a joss stick burning!’

Kicking off our list, we’re seven minutes into tonight’s edition of the ITV soap and Bernice remembers the five voicemails she left Liam in last night’s episode.

‘I think I may have left a joss stick burning!’ Bernice announced as she ran out of the shop.

Determined delete the messages, Bernice found Liam in the pub, grabbed his phone and tried to get rid of the voicemails…but she didn’t have much luck.

Liam quickly realised what was going on and Bernice was left humiliated once more as she told the man of her dreams about the drunken calls.

Viewers will know this isn’t the first time Bernice has worn a wedding dress to someone else’s wedding.

Heartbroken, humiliated but still convinced she stands a chance of winning Liam over, a glance at a wedding magazine gave Bernice the perfect idea.

Pouring herself a ginormous glass of wine

It just gets better and better, doesn’t it?

With her wedding dress on, Bernice set about preparing to confront Liam by pouring herself the biggest glass of wine…which actually turned out to be most of the bottle.

Why didn’t she drink from the bottle? This is Bernice, everyone.

As Leyla marched over to Bernice’s, she was somewhat horrified to see her in a wedding dress but, there was a part of her that didn’t seem that surprised, at all.

Arriving with his eyes shut so he couldn’t see Leyla in her dress, Liam called out ‘sweetheart!’ to her and, in true Emmerdale style, both Leyla and Bernice replied: ‘yes?’.

A couple of iconic lines to mention during this segment as we learnt Liam’s feet aren’t cold, they are actually incredibly warm.

And of course, ‘and you think you can just waltz in and just snatch him back? Maybe that is the reason you are so painfully alone’.

Bernice being ‘symbolic’ and trying to burn her wedding dress

Holding onto the shred of dignity she still had intact, Bernice set about trying to burn her wedding dress in an attempt to let go of the past.

Taking control of her life, Bernice decided it was time to move on and say goodbye to the man who doesn’t love her anymore.

Putting the past behind her is going to be a challenge for Bernice, given the fact that she’s still living in the same village as Liam.

As the wedding day draws to a close, we just have one thing to say.