Cinema and television have long been the standard gateways to explore different cultures and locations. But is there an opportunity to apply it, in combination with virtual reality, to a marginalized group often ignored? The Argentinean production “4 Feet High,” debuting at Sundance, seeks to utilize VR as well as a standard episodic television structure to discuss disability in a new and unique way.

“4 Feet High” tells the story of Juana (Marisol Agostina Irigoyen), a young woman who uses a wheelchair and has just transferred to a new school. In her quest to find herself, she gets enmeshed with a group of fellow students protesting the country’s lack of sexual education in schools.

There are two components to taking in “4 Feet High.” The most accessible — meaning what will capture able-bodied audiences — is watching the six-episode series. This captures the nuances of Juana’s struggle for independence, as well as that of her friends and family. When telling a disabled narrative there are numerous things at play, many of which are only tangentially about being disabled. In this case, the narrative doesn’t just examine Juana’s sexual awakening, but how her friends and the school responds to her as a disabled individual.

There are moments that feel painfully real, not just as a coming-of-age story for teenagers, but specifically for disabled teenagers. When she and a friend are cited for being out of class, Juana demands the principal give her the same punishment or else it’s discrimination. Juana goes out to a nightclub where a woman stops and declares Juana is setting an example for people to appreciate life. Juana responds with: “Your life must be awful if I’m setting the example.”

Where the series pushes the envelope, though, is in its frank depictions of Juana engaging in sex and, more importantly, the minutiae of intimacy. Because disability is not showcased in television, the “how-to” of relationships are left blank for disabled teens. It’s hard enough learning about sex from movies, but imagine not knowing at all where to start. We see Juana have to explain to the people she’s intimate with on how to handle her, unbuckle her from her wheelchair, and that creates intimacy in a way that feels more vulnerable than the sex act itself.

Of course, the audience might say that Juana is definitely putting herself in situations that could turn ugly, but what Maria Belen Poncio and Rosario Perazolo Masjoan do is make the audience question why can’t Juana just have flippant sexual experiences like everyone else? At one point, there’s a risk of pregnancy, reminding everyone of how precarious reproductive health services are in Argentina. 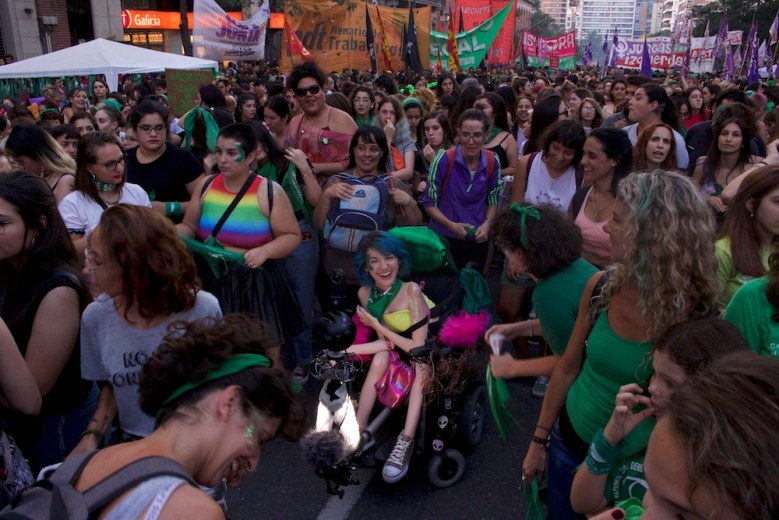 The sex aside, what “4 Feet High” often gets right is the basic desire to just be accepted and micro-aggressions that are often expressed by the people closest to her. Her mother critiquing what type of dress Juana wants to wear — asking her why “you want people to look at you,” or Juana’s friend believing that the cute girl in the wheelchair is perceived as more likable and thereby is overshadowing the sex education movement. In the VR segment there’s a moment where Juana is lifted in her wheelchair at the behest of her friend, who asks a group of strangers for help. If you’re a disabled viewer, you’ve been in those situations, and never before have they been seen, let alone contextualized.

For the Sundance Film Festival the creators added in a four-episode VR component, comprised of specific scenes that put the viewer into Juana’s world, literally. This is certainly fun on a novelty level, but it’s hard to see this as enhancing Juana’s story in a major way. Maybe it’s because the headset doesn’t necessarily put you on Juana’s level in the same way as hearing her thoughts; it’s still presented in an episodic, albeit truncated, way. It would have been better to maybe add a physical component, of placing the viewer on the same level as Juana and navigating barriers like stairs, especially in the episode where she and a friend attempt to visit a sex shop.

I, personally, want to see more series like “4 Feet High.” You don’t need to gussy it up with VR to get people to care about the story. Juana and her issues are perfectly suited for television and, if anything, this series proves there is room for more disabled storytelling.

Good Omens: How were David Tennant and Michael Sheen picked to star in Good Omens?