Her love life may not be as meticulously documented as some of her fellow pop music artists like, say, Taylor Swift or Ariana Grande, but Australian rapper Iggy Azalea has racked up an impressive list of ex-boyfriends all the same.

At the same time that she confirmed the birth of her first child, a baby boy named Onyx, in October of 2020, Azalea confirmed that she had split with her son’s father, fellow rapper Playboi Carti. “I’m raising my son alone & I’m not in a relationship,” she wrote to her fans, via People.

It would appear that she’s perfectly happy to remain single, according to a source speaking to Hollywood Life. “Iggy has never been happier, becoming a mom has brought this deep sense of satisfaction,” the source said in April 2021, adding, “Iggy is open to meeting someone, but only the right someone. She has no time for BS. She has men throwing themselves at her but it’s a matter of meeting the right one. She doesn’t feel any sort of need to have a man. Her life is very full and happy. But if the right guy comes along, she would be open to it.”

So before Playboi Carti came along, who were the guys who failed to make the final grade?

Iggy Azalea has dated some of your fave rappers 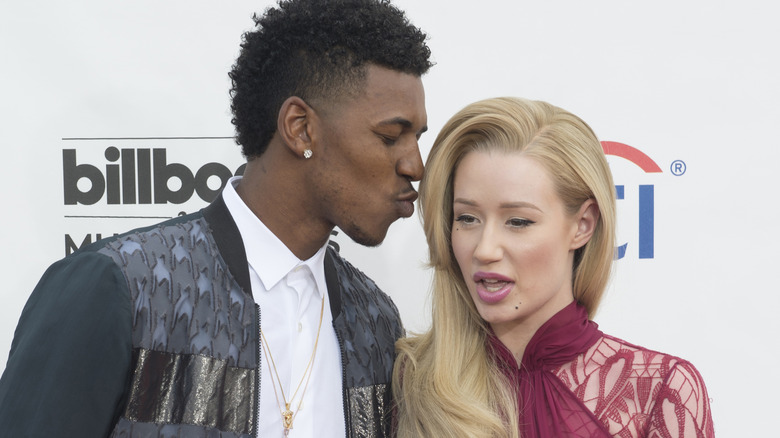 “Fancy” rapper Iggy Azalea has been romantically linked to some of the biggest voices in rap music today, as well as some athletes and actors that turned out to be just rumors. Way back at the start of her career in 2011, Azalea was hot and heavy with A$AP Rocky, the rapper and frequent best-dressed-list-topper recently freed from Swedish prison. The couple was so in love they even got matching tattoos — which they removed following their split in 2012, per Hollywood Life.

Next came NBA player Nick Young, who reportedly first got Azalea’s attention by shouting her out on social media in 2014, according to InTouch. Sadly, these two weren’t meant to be either and went their separate ways after news broke that Young had been cheating.

After this split, Azalea had short-lived flings with the likes of French Montana, LJay Currie, Quavo, and Deandre Hopkins, before starting up with her latest long-term love, Playboi Carti, in 2018.