Adele and Skepta may be an item after all, as they have recently fueled dating rumors. In case you missed it, first rumors of the two being more than friends sparked in September 2019, after Adele divorced from then-husband Simon Konecki. “Things have been heating up,” a source told People in 2020. “They run in the same circles in London, and she’s having fun.”

As they both grew up in Tottenham, it’s easy to see why they have things in common. In fact, Adele and Skepta have been friends for years. “Adele texts me all the time and keeps me in check,” Skepta told Evening Standard in 2016. “She speaks to me about how things are going.” That same year, Adele also took to social media to celebrate her longtime friend, posting a picture of him on Twitter. “Tottenham boy [heart emoji],” she wrote. “love you,” Skepta reportedly responded (via Daily Mail).

Despite all the rumors, Adele announced she was single. “I’m going back to my cave now to be the (single) cat lady that I am! Peace out til next year,” she wrote on Instagram in October 2020, not long after People reported their rumored romance. Still, it seems like the two may actually be more than friends. Find out more below.

Skepta and Adele were reportedly shopping together in California 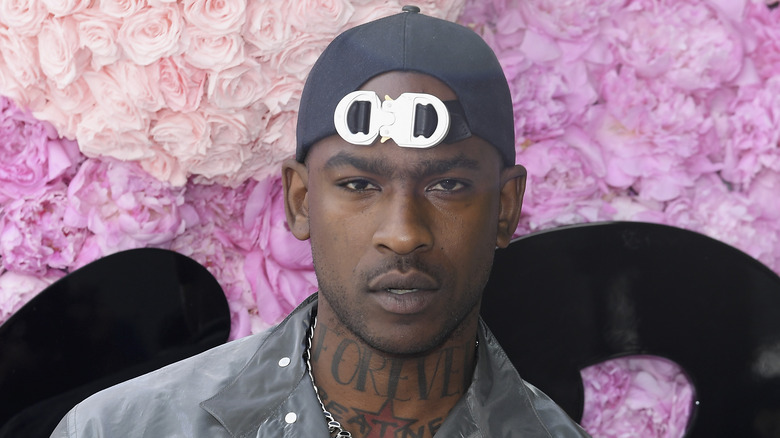 As reported by Page Six in July 2021, Skepta and Adele were recently spotted shopping at the Prada store inside the Cabazon Outlets in San Bernardino, Calif. And, according to witnesses, they very much looked like a couple.

‘”She was sitting watching him while he was picking sweaters, pants, trying on jackets and coats and having the employees help him,” a source told the publication. “She was giving him feedback and saying what she thought he looked great in,” they continued. The source also added they looked adorable together. “It was cute that just waiting and being a normal girlfriend while he looked,” they said. “He must have shopped for 45 minutes.” Per the same source, Adele also played with a customer’s puppy.

So far, neither Adele nor Skepta have commented on the reports. Skepta’s last public relationship dates back to 2018. That year, he dated Naomi Campbell and the two graced the cover of GQ together. He also has a daughter, River, from another relationship. Adele, meanwhile, started dating Simon Konecki in 2012, then secretly married him some years later. The two officially divorced in September 2019 and share a 9-year-old son, Angelo.

Camila Cabello on Providing Mental Health Support for Activists: ‘Heal Yourself Before You Heal the Community’

Alicia Keys' Husband Swizz Beatz Wishes His 'Queen' a Happy 40th: 'I Love the Way You Love Me'