The “go girl, give us nothing” meme was one of the highlights of 2018, and apparently, it also affected pop star Dua Lipa in a major way. In case you missed it, the meme originated from Lipa’s BRIT Awards performance that same year.

That night, the singer performed her single “New Rules,” joined by a group of backup dancers. Her performance and stage presence, however, didn’t seem to land with most viewers. “love her lack of energy, go girl give us nothing!” one user wrote in a now-deleted comment in 2018 (via People). And, just like that, the hilarious meme came to life.

Pretty soon, the sarcastic phrase became the go-to comment for any lackluster and awkward situation, from Courtney Yates’ “Survivor” challenge to Lady Gaga’s surprising lack of awards. As it turns out, the inspiration behind the meme, Lipa, took it relatively well and decided to put all the criticism to good use.

Find out more about how the meme impacted Dua Lipa’s career below. 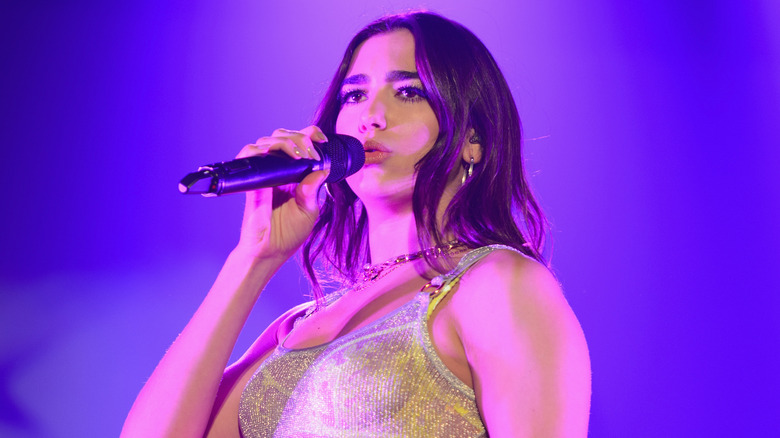 On June 29, Dua Lipa graced the July/August cover of Vanity Fair, where she discussed her growth in the music industry. In particular, the U.K. pop star revealed that the “go girl, give us nothing” meme was actually sort of accurate. Apparently, she didn’t adequately prepare for her 2018 BRIT Awards performance.

And so, Lipa saw the meme as a wake-up call. “You want to show that you’re here to stay and you want to show that it’s not just about one album or one big song or whatever it is.” Then, the singer went on to explain how the meme made her want to go into rehearsal right after recording. “And then when I come in and I do the performances, they’re all going to be amazing,” she explained. “I’m going to prove to people that I can do this and that I’m here to stay.”

It seems like Lipa’s hard work has started to pay off, as fans are noticing her growth as a performer. “She went from go girl give us nothing to giving us one of the best performances on the Grammys, that’s artistic growth,” one fan recently commented.