“The first night is always slightly wobbly,” Mick Jagger quipped as the Rolling Stones kicked off their 2019 No Filter tour at Chicago’s Soldier Field. But there’s “wobbly” and then there’s Stones wobbly—and stakes were high tonight. It was the Stones’ first show in nearly a year—their first since Jagger underwent surgery in April to replace a heart valve. So Mick was extra Mick tonight, as if maybe somewhere deep in that surgically reconstructed heart of stone, he felt he had something to prove. If so, he proved it. The show was a triumph for the World’s Greatest Rock & Roll Band, with Mick prancing all over the stadium in prime hip-shaking, troubadour-trapping fight mode.

The Stones needed to postpone their 17-date 2019 North American tour because of their frontman’s health issues. But barely two months after his procedure, a month shy of his 76th birthday, Mick dismissed any worries about whether he might hold back onstage. He already made headlines with his instant-classic post-op dance video, flaunting his undiminished moves in classic Mick mode: part clever sales pitch for the new tour, part narcissistic come-on. None of the Stones were holding back tonight.

The band didn’t come to waste time on frills—no special guests, not much chit-chat. They came to show off, on a chilly June night in Sweet Home Chicago, in front of a sold-out stadium full of 60,000 fans. (The house rules warned Stones fans: “No drugs, illegal substances, legal highs, nitrous oxide, psychoactive substances, etc.” Somehow, Keith Richards was allowed in the building.)

The show kicked off with “Street Fighting Man,” “Let’s Spend the Night Together” and “Tumbling Dice,” with Keith slashing away at his guitar while Mick scampered down his catwalk with evident glee. Ron Wood dashed around in Mick’s footsteps, ever the mischievous schoolboy. Even Charlie Watts couldn’t resist flashing a smile behind the drums. Mick’s moves all night had a defiant “told you so” vibe, coming back so soon after his heart surgery. You were worried whether this guy was in peak condition? Picture yourself moving like this on the best day of your damn life.

Keith and Woody just revealed their secrets of crafting the perfect Stones set list, but nobody would have guessed tonight’s weirdest pick: they busted out an excellent version of “Sad Sad Sad,” a long-forgotten Steel Wheels cut they haven’t played since 2002. Every night of the tour has a wild-card slot with a classic voted by the fans: tonight Mick announced the fans’ pick was “You Got Me Rocking,” a dubious electoral result to say the least. Even Mick had trouble making this claim with a straight face.

But the show really blew up into a Stones-worthy trip around the half-hour point, when the four core Stones gathered together on the B-stage for an acoustic set. “Angie” was an extremely welcome surprise, with Mick milking the sentimental resonance of the final question: “Ain’t it good to be aliiiiive?” “Angie” led right into the hoedown decadence of “Dead Flowers.” The moment felt like an unspoken tribute to the Stones’ fallen muse Anita Pallenberg, who died in 2017 after a lifetime of giving them hellacious trouble. (And inspiration—for the Stones, the two will always go hand in hand.)

After that, the energy never flagged: the show got frisker and better as it went on, with Mick earning his crown as Mr. Fever In The Funkhouse. He really let it loose during “Sympathy for the Devil,” sashaying and prancing and spinning and taunting the crowd with endless “tell me baaay-baaay, what’s my name?” squeals. He brought fresh intensity to the role of Lucifer, Prince of Darkness, as if he felt an urgent need to assure the crowd, “Hoo, and I cannot stress this enough, hoo.” The expanded band included keyboardist Chuck Leavell, vocalists Sasha Allen and Bernard Fowler and hometown hero Darryl Jones, who has held down the bass gig nearly as long as Bill Wyman did. (Mick introduced Jones as “the South Side’s finest!”)

Keith held center stage beside Charlie, the two of them all severe gravitas amid the Mick-and-Woody antics. Keith took over for his excellent showcase segment, announcing, “Good to be back. Good to be anywhere.” He did a rugged version of “You Got The Silver,” facing off with Woody on acoustic guitar and Watts’ brushed drums, then rocking out with a beautifully unrepentant version of his outlaw anthem, “Before They Make Me Run.” 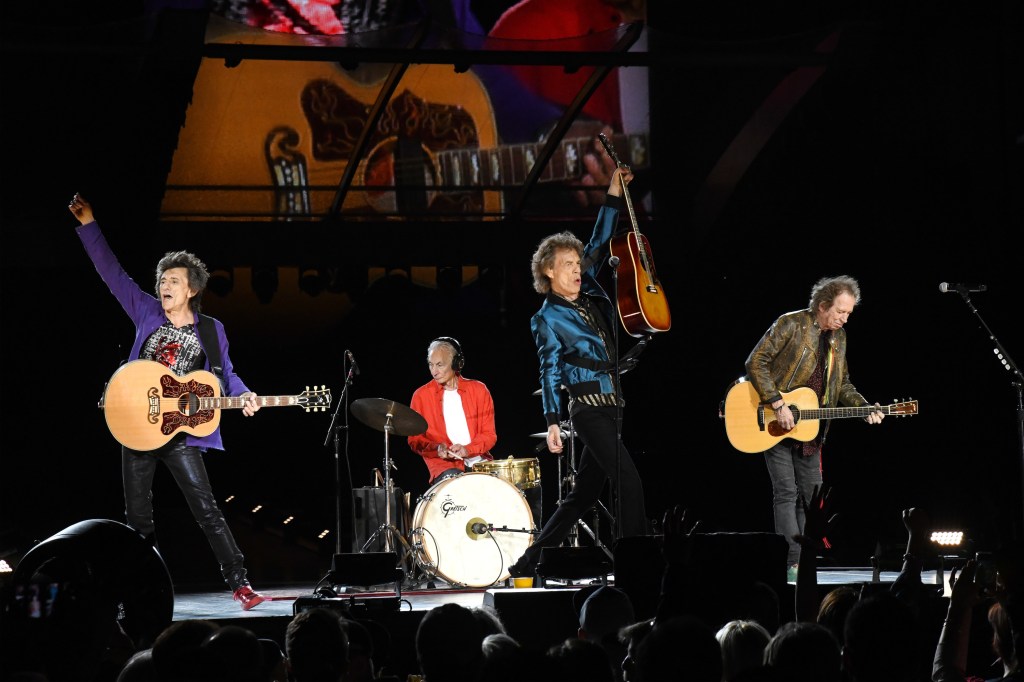 The Rolling Stones kick off the North American run of their ‘NO FILTER’ Tour at Soldier Field in Chicago, IL on Friday, June 21, 2019 (Photo by Kevin Mazur/Getty Images for RS)

The North American tour runs through the summer, wrapping up August 31st in Miami. But it makes sense that the Stones started by bringing it all back home to Chicago, just down the road a piece from the old Chess Studios on 2120 South Michigan Avenue. (When the Stones first toured America in 1964, they made a pilgrimage to the birthplace for so many of their favorite blues records; as Keith has said, they found Muddy Waters casually painting the ceiling.) Going for local humor as always, Mick joked about Chicago delicacies such as “Italian beef,” and introduced Ron Wood as “the Monet of the Magnificent Mile.” (Wood, a prolific dauber of canvasses rather than ceilings, has a new book of his painted Stones set lists, Set-Pieces.)

Mick played up the Cockney accent in “Paint It Black,” making it feel almost like an accidental elegy for David Bowie. “Midnight Rambler” became a showcase for each member of the band, with Mick’s gratifyingly vivid harmonica, stretching out into a snippet of “You Gotta Move.” For the final stretch they blasted through one crowd-killing classic after another: “Brown Sugar,” “Jumpin’ Jack Flash,” “Start Me Up,” “Satisfaction,” a long and stormy “Gimme Shelter” where Jagger faced off with Sasha Allen over the sex-and-death groove.

But the surprise musical and emotional highlight of the night: “Miss You,” which the band stretched out into something longer, lonelier, more soulfully naked than ever before. Mick skipped up the catwalk and lingered there alone during the breakdown soliloquy, moaning the line “I wanna sing! I wanna sing!” over and over. You wouldn’t exactly say he seemed emotionally unguarded—this is Mick Jagger, after all. But he fleshed out all the grown-up divorce anguish in the song—an ode to middle-aged loneliness in the big city, a song Mick wrote in his mid-thirties, back when he figured that was as middle-aged as anyone could get. (He had no idea.) He didn’t back down from the emotion in the song, and didn’t make a camp joke out of it, either. He made it feel like a moment of doubt and pain—as vulnerable as he’s ever sounded.

Could it be that for a moment—maybe just a fraction of a flicker of a moment—the Rolling Stones wondered if they needed to prove they could do this? Maybe. But not bloody likely. Every moment of “Miss You” was the Rolling Stones at the top of their game—as was the entire show. Make no mistake, these guys were shamelessly showing off all night. They earned that.