The works of Claudio Monteverdi have long had a special allure for Erin Helyard – and none more so than The Return of Ulysses.

It’s the baroque opera with everything, says the Pinchgut Opera artistic director.

“It has sexy scenes, it’s got incantation scenes when Ulysses is turned into an old man. There’s comedy. There are fart jokes. There are laments and gods and mortals. It had everything [seventeenth century] Venice wanted,” says Helyard.

“This is my favourite Monteverdi opera. It speaks to me personally because it’s the most human of the operas. It really speaks to human emotion.”

When Pinchgut stages Ulysses this month it will mark the completion of the company’s Monteverdi cycle, that began in 2004 with Orfeo and continued in 2017 with the Coronation of Poppea. 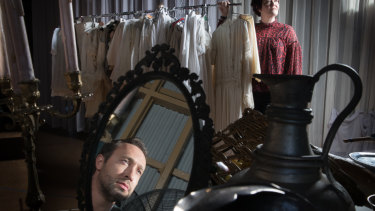 Fernando Guimaraes and Catherine Carby in the rehearsal space for the Return of Ulysses.Credit:Janie Barrett

Ulysses will be directed by US director Chas Rader-Shieber, who also directed last year’s production of Artaserse, recently recognised in the International Opera Awards as Best Rediscovered Work.

“Winning that prize underlines our key mission, which is to present neglected masterpieces,” says Helyard.

Rader-Shieber didn’t want to give away too much about his vision for Ulysses, which will star Portugese tenor Fernando Guimaraes in the title role and local mezzo-soprano Catherine Carby as Penelope.

However, he confirmed it would not be a strict period production, but would contain “references” to the period.

“I’m more than willing to put on a period production as soon as someone finds me a period audience,” he says. “Because people are living and breathing now we have to pay attention to that audience.”

And making a virtue out of the necessity that comes with staging the work in the City Recital Hall rather than in a conventional theatre, the audience will be intimately involved.

“We want to play a little with the convention of these magical effects and transformations and expose them,” says Rader-Shieber. “Let the audience in with a wink.”

“Fernando goes from a recently rescued and slightly wet Ulysses and by the grace of Minerva he is able to disguise himself as a beggar. It doesn’t involve smoke and mirrors. It’s quite simple but great fun.”

Rader-Shieber added that he enjoys presenting work for the Pinchgut audience, whom he feel are both receptive and informed.

“This company has almost trained its audience to think about this repertoire in a certain way – not as a staid period peformance practice thing but as a very vital kind of theatre," he says.

“Knowing your audience wants that allows you to wink in a subtler way sometimes.”

How Rosalía Responds to Criticism That She Shouldn't Make Flamenco Music