Maeta has shown what she’s willing to go through for her art after being bitten by a snake on a music video set.

The B***h Don’t Be Mad singer, who is signed to Roc Nation, shared a short clip of the savage attack on Instagram.

In the five-second video, Maeta is seen lying on a carpet with one snake already positioned vertically across her torso with its head facing towards her chin. She seemed to be handling it fairly well and smiled as a handler moved to place another snake over her body.

However, it’s at this point that the first snake, which was already positioned, suddenly lurched towards her face before clamping down on her chin.

Maeta immediately recoiled and pushed the snake off her while grabbing her chin in pain and rolling away.

She captioned the post: ‘What I go through to make videos for y’all.’

Reacting to the shocking moment, one Instagram user quipped: ‘Noooooope not the assignment.’ 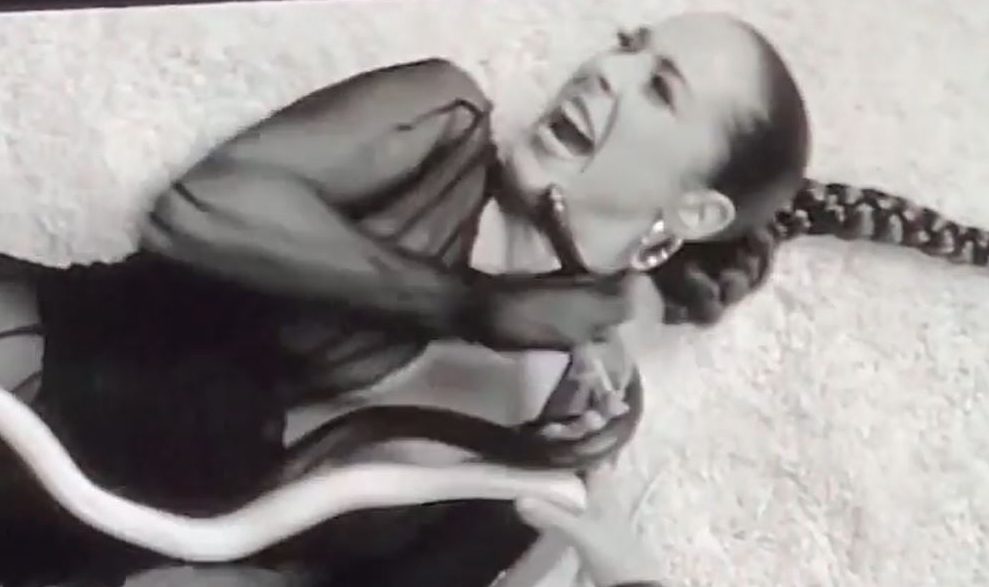 ‘They better start using fake ones,’ another said.

One follower chimed in: ‘Idc what y’all say those little snakes are more dangerous than the big ones💀they move faster.’

Someone who was clued up on reptilian behaviour said: ‘If Anyone Was An Expert They would Be Able To See He Was In Attack Mode Coiled Up.’

Another stated: ‘Gotta stop treating them animals like props.’

Fortunately, Maeta wasn’t seriously harmed and returned to Instagram with a flawless selfie and a clip of her belting out a Christmas song.

The 21-year-old, who hails from Indianapolis, rose to prominence earlier this year when she signed to Jay Z’s management label Roc Nation. She also released her debut album, which features the popular songs Toxic, Teen Scene and Habits.

Sharing the inspiration behind her music, Maeta previously said: ‘I’ve always used music to help work through my emotions. And though I’m a mostly happy and grateful person, it’s always the sad and bittersweet songs that really get me.

‘That’s what makes music so special to me at this point in my life.’

Raven Leilani’s Best-Selling Novel, Luster, Is Being Adapted for HBO