What a Beatle wants, a Beatle generally gets, even when it may require a bit of harmless subterfuge, as proved to be the case Saturday during Paul McCartney's sold-out final U.S. stop on his 2019 Freshen Up tour.

Well into his three-hour performance at Dodger Stadium in Los Angeles, the 77-year-old rocker noted, "We know what people want to hear, because when we play a Beatles song, all the cellphones come on and it looks like a galaxy of stars, and when we do a new song, it looks like a black hole. But we're going to do the new ones anyway." 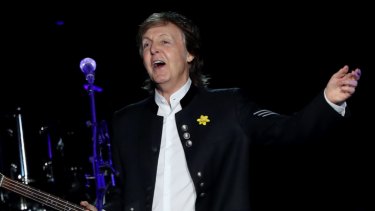 That was his none-too-subtle introduction to Fuh You, one of three songs McCartney weaved in from his latest album, last year's Egypt Station. Sure enough, fans delivered just what this surviving member of the Fab Four asked for, and thousands of cellphone lights illuminated the stadium during what must have been one of the least-known songs of the night – more than during any other number up to that point.

But old-school fans were rewarded about an hour later by an appearance from the other surviving Beatle, Ringo Starr, who strolled onstage near the end of the night to play alongside his former bandmate one more time. The cellphone lights blazed again.

The world's most famous drummer's own Ludwig drum kit was rolled out from the wings. He sat down to join McCartney and the band McCartney's been playing with for the last two decades for the Sgt. Pepper's Lonely Hearts Club Band reprise and for the number on which he so famously suffered those blisters on his fingers a half-century earlier, Helter Skelter.

Starr also paid homage to something McCartney had voiced earlier in the night while introducing Here Today, the heart-on-sleeve confession he'd written after John Lennon's death in 1980 about the things he never said to Lennon while he was alive. "You didn't say 'I love you man,' to another guy in those days," McCartney said.

Starr, however, used those very words, and heard them come back at him in return during this rare public meeting and joint performance.

Up till that point the concert had already been one of McCartney's most energised performances in recent years. There have been shows where you wished he might exhibit a little more fire in the belly.

The only signs of any cracks in the armor was the break in his voice that's a regular feature when he sings Here Today for Lennon, and that he took not one but two sips of water during the show – an anomaly that's become a bit of a running gag among McCartney watchers over the years.

Perhaps it was the fact that Saturday's show was the last hurrah for this round of shows, and that it also featured Eagles great Joe Walsh – Starr's brother-in-law – who lent his skills to the grand guitar battle that typically caps the show. McCartney's recent concerts climax with a Golden Slumbers/Carry That Weight/The End medley from Abbey Road, and Walsh turned what's usually a three-way exchange among McCartney and his regular guitarists, Rusty Anderson and Brian Ray, into an extended quartet of instrumental fireworks.

It may also have been the familial feel of the evening that was heightened by shout-outs to his wife, Nancy, daughter Mary and two of his grandchildren who were in the house. Whatever it was, McCartney was in top form, his voice effortlessly climbing to the heights it always hit so easily back in the day.

The show also had extra vibrancy because McCartney has at last invested in a live horn section to handle parts he's long delegated to synth horns usually dispatched by keyboardist Paul "Wix" Wickens.

This time around, several songs were, yes, freshened up by the muscle delivered by the three-man horn section featuring sax, trumpet and trombone, deployed periodically on songs including Got to Get You Into My Life, Lady Madonna, Ob-La-Di, Ob-La-Da, Let 'Em In, Letting Go, Come On to Me, Let It Be and, inevitably, Live and Let Die, the last also the vehicle for a requisite fireworks display near the end.

Now if he'd just do the same by inviting a bona fide string quartet to serve up Beatles producer-orchestrator George Martin's brilliant arrangement for Eleanor Rigby, although such an observation borders on nitpicking.

McCartney certainly didn't shortchange any gearheads in the crowd as he moved easily from his signature Hofner Beatle bass early on to acoustic guitar, grand and upright pianos, mandolin and ukulele for various numbers.

A midshow semi-acoustic set was another highlight, with stripped-down versions of I've Just Seen a Face, Dance Tonight (enlivened by the spirited choreography exhibited by drummer Abe Laboriel Jr.), the primordial Quarry Men song In Spite of All the Danger, Love Me Do and one Beatles number he's played live infrequently, From Me to You.

If the between-song patter is familiar to anyone who's seen one of McCartney's tour in the last decade, so be it. He set up one of several song intros he's delivered dozens of times noting that many in the audience were probably seeing him for the first time.

Even for McCartney veterans, it's endearing to hear him share stories of the rites of passage he experienced with John, Ringo and George Harrison and Martin, as well as encounters with Jimi Hendrix and others over the course of his long and winding road.

Anyway, it's the way a Beatle wants it.