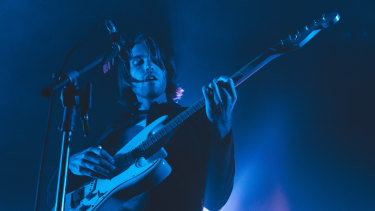 This Sydney trio called themselves "Mansions" when they formed in 2014. They changed it when they found a US band already had the name, but on this night it sounded like material rewards were still at the back of their minds.

For the debut album they were playing, March's Shadowboxer, seemed designed to hit as many of the touchpoints as possible for playlist addition in 2019.

There were bright, slow-to-mid-paced synthesiser rhythms, reminiscent of Mansionair's labelmates on Glassnote Records, Chvrches. There was judicious use of the crowdpleasing drop, a la electronic dance music titans Chainsmokers and Kygo. The tasteful guitar overlays of an Ed Sheeran or 5 Seconds Of Summer.

And front and centre, the timeless appeal of a pretty-voiced boy pouring out his heart.

Calculated or not, the approach is working for Mansionair: 100 million-plus streams, heavy radio rotation, and this show selling out weeks ago.

The success is hard to begrudge. Live, these three: Jack Froggatt on vocals and electric guitar, Lachlan Bostock on synths, keyboards, laptop and sometimes bass guitar, and Alex Nicholls on drums, provided a far more organic experience than one might expect from the slickly-produced Shadowboxer.

Walking on in matching white button-up shirts, to the poker-machine synth washes of EST, the opening bars of Alibi showed we weren't about to get a soundalike show.

While its whooping, hard-edged synth track – inspired by the band watching film of Kanye West running through a forest – remained the bed, Froggatt's deft fingerpicked guitar added new textures, and Nicholls' jazz-influenced drum fills were a revelation for those familiar only with the metronomic beat of the studio version.

Froggatt is on the way to being a great stage presence. Most of the lyrics he's written to date are serviceable, but when his high, crystalline voice got hold of a really good one – "I'm wrapped around your finger/ it's pulling on the trigger" from We Could Leave, for instance – he built a tension whose release was euphoric.

The frontman's thrusting dance moves to Bostock's drops were another welcome surprise. However this gig's one totally out-of-character moment pointed to a possible future direction for Mansionair: at the end of the brooding Best Behaviour, the band tacked on a wild, cod-heavy metal reprise that had Froggatt dropping the soul-man persona for demonic declamation, and the crowd going nuts.

They weren't always so galvanised. The chatter was unfairly loud during Froggatt's wispy folk ballad Heirloom, and the band's habit of writing songs as imaginary soundtracks for film scenes meant we sometimes ended up with background music. A few tracks in the second half of this one-hour show glided by on clouds of polite falsetto and synthetic sweetness, and didn't leave much lasting impression.

That certainly didn't apply to Falling, which remained by far Mansionair's best song, its descending melody and universal sentiment winning it this night's biggest singalong. And with its funky, pre-recorded vocoder chorus, recent single Astronaut (Something About Your Love) will always be a banger live.

In fact it showed up Mansionair's biggest hit to date, the encore closer Line Of Sight, a Grammy-nominated duet from 2017 with ODESZA. Its leaden rhythm and novelty helium-voiced chorus betrayed EDM tropes that the Sydneysiders have since surpassed in their best work, and will continue to do so if they take a few more risks.