Jodi Phillis remembers the moment she knew the Clouds were over. It was 1997 and the Sydney band had just made a video for Never Say Forever. They were somehow convinced to wear masquerade masks while floating around in a rowboat and then in some strange sort of dream sequence they appeared to be dressed as Greek gods. Phillis was not happy with the result and asked their record company not to release it. Soon afterwards she saw it on Rage.

It was the last straw. The following day Phillis went around to visit her longtime friend Trish Young, the Clouds’ bass player, co-songwriter and co-vocalist. She said she wanted to stop. After a whirlwind eight years, four albums, six EPs and hundreds of gigs, the Clouds were over. 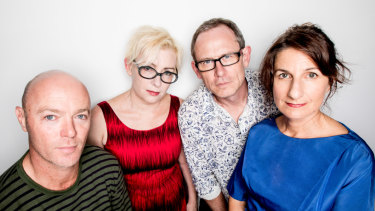 They reformed in 2011 and continue to do a tour roughly once a year. Meanwhile, Phillis has maintained a solo career, releasing her fifth album, Becoming, last year. But as a songwriter, musician and performer, the way she operates now is very different to the ’90s when she fronted one of Australia’s most popular alternative bands.

“It was a totally different world back then,” says Phillis, from the Wollongong home she shares with her husband, fellow musician Tim Oxley. “For a start there was the live scene in Sydney, where there were lots of small and medium-size venues and we were playing at least a few times a week. This was before the pokies and before the lockout laws and before the heavy gentrification of arty areas.”

There was a real hunger for live music then and she remembers record company A&R people at every gig, eager to sign the next big thing. The Clouds were quickly snapped up by Red Eye, an alternative label that was bought by Polygram. Their 1991 debut album Penny Century, with its Pixies-like dynamics and the intricately winding harmonies of Phillis and Young, is still a well-loved artefact from the era. But touring took its toll on the band and on Phillis in particular.

Now it’s really fun and I cherish it more while it’s happening.

“We were travelling and playing and we got the exciting life we wanted, but it came with a price. The price for me was mental health. I couldn’t f—ing sleep. I developed severe insomnia and depression. It was hard. Trish suffered too but she was more of a natural gypsy. I found the constant moving around exhausting.”

She also admits that she has no idea how much they were paid for gigs.

“We were just babies back then,” she says. “We didn’t manage the money. We got big record advances and publishing advances but we were on a low-level wage that would have been slightly more than the dole. We had a crew, we had management in Sydney, London and San Francisco and record labels wherever we went and we didn’t have to think for ourselves or plan our own lives. You settle into some strange zone. When that finishes you have to work out your life again.”

After the break-up that’s exactly what Phillis had to do. Today she manages to stitch together a living from music – commissions to compose music for the screen; teaching music; getting the occasional Clouds song placed in TV or film; working as an artist-in-residence at a progressive funeral home; and doing gigs, both solo and with the band.

She raised $15,000 via crowd-funding to make her latest album and says, “I found the whole experience empowering and rewarding. You have to rise to the challenge of showing people who you really are and it makes the exchange between artist and music-lover really direct.” 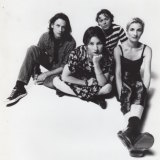 As for the Clouds, the four members live in four different cities – Phillis in Wollongong, Young in Sydney, lead guitarist Dave Easton in Melbourne and drummer Raph Whittingham in Perth – and they have meetings via Skype to organise tours and discuss business.

Is it different getting on stage with the band and playing those songs in 2019, compared to the glory days of the ’90s?

“I remember in the ’90s being so tired and I used to sometimes get really complacent at a sold-out gig and take it for granted,” she says. “I regret that. Now it’s really fun and I cherish it more while it’s happening.

“Of course I have nostalgia for the old days. They were special times and I was young and it was exciting. It’s nice to look back on, but I don’t miss doing music that way.”

The Clouds play Oxford Art Factory in Sydney as part of Vivid on Thursday,  June 13; The Triffid in Brisbane on Friday, June 14; and Corner Hotel in Melbourne on Saturday, June 22.

New Hope Club: How The Beatles provide ‘a lot’ of inspiration for band’s newest music