The bitter divorce battle between Kelly Clarkson and Brandon Blackstock rages on. The couple, who share kids River and Remington (Blackstock also has Savannah and Seth from a previous marriage), surprised fans in June 2020 when they announced their split. We are not going to lie; the news broke our little music-loving hearts quite a bit.

Throughout the divorce, Clarkson has been pretty candid about how she feels and what an emotional toll it’s taken on her. “What I am dealing with is hard because it involves more than just my heart. It involves a lot of little hearts,” she said on an episode of her self-titled talk show in September 2020. “We have four kids, and divorce is never easy. We’re both from divorced families, so we know the best thing here is to protect our children and their little hearts.”

In late July, a judge awarded Blackstock a whole lot of money for spousal support. According to The Blast, Clarkson has to shell out $150,000 a month for spousal support and another $45,601 in child support payments. Ouch. Additionally, the “American Idol” alum has to literally pay the price for Blackstock’s attorney fees, which are around $1.25 million. While it’s a ton of coin in monthly expenses, the court docs also reveal that Clarkson nets around $1.5 million a month, so we are guessing that she will be just fine, but dang!

And with a new divorce comes a new career for Blackstock. Keep scrolling for more deets. 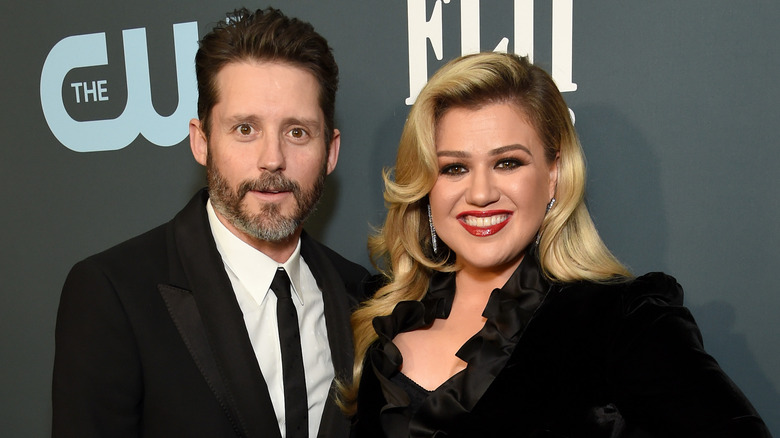 In terms of his profession, Brandon Blackstock is doing a total 180. Kelly Clarkson’s ex used to work in the music industry as a manager and had worked with big names like Blake Shelton. According to Us Weekly, Blackstock plans to keep Shelton as his client, but aside from that, he’s quitting the music industry … perhaps because it would mean too many run-ins with Clarkson? The outlet shares that Blackstock now has plans to become a full-time rancher instead.

In official court documents, a judge revealed that Blackstock made a “very deliberate choice to change his life and become a rancher full-time,” and he did so after he and Clarkson had officially split. “He testified that he is not devoting any effort toward expanding his client list and music management business… Respondent has made a very deliberate choice, that he testified he planned for a long time, to significantly change his lifestyle from primarily working in the music and entertainment industry to working in an agriculture community and lifestyle involved in full-time ranch and cattle work.”

His latest business venture appears to be the reason that Blackstock is adamant about keeping the couple’s Montana ranch, which racks up a bill of $81,000 a month. Yes, a month. Clarkson wanted to sell the property; however, the judge ruled that, as long as Blackstock can keep up with the expenses, he can keep it. If not, Clarkson could file another motion to sell the property.

Beyoncé's Most Iconic Concert Moments Have Us Bowing Down