Kelly Clarkson and Anna Kendrick are more alike than you think! Kendrick appeared on the August 10 episode of “The Kelly Clarkson Show” where she discussed her love of Legos as well as her passion for organizing. Kendrick first showed off an impressive Lego build, clearly proud of her “Star Wars” creation. She noted that the building really picked up during the beginning of the coronavirus pandemic, saying, “Legos were very COVID Season 1.” “Now I don’t know what to do,” she added.

The “Pitch Perfect” star then thought she would “take them apart and give them to someone,” but once she realized how much work would go into taking apart her designs, Clarkson enthusiastically raised her hand, offering to take on the project. The “Since You’ve Been Gone” singer explained that she “love[s] breaking them down,” also revealing all of her kids’ Legos are color-coordinated. Clarkson gushed, “I find so much satisfaction in organization.” The women quickly bonded over organizing, with Kendrick saying, “I love pretty boxes. I love a labelmaker,” but claiming that Clarkson was at a higher-level of organization than she was.

Clarkson defended her ways, emphasizing just how bad it is when you step on Legos if they’re not put away. “When you step on them, it really makes you so angry inside that you just tell [the kids] they should run away from you.” Although Legos might bring out the worst in Kelly, she’s undoubtedly devoted to her children (Legos and all).

Kelly Clarkson and her kids live the good life 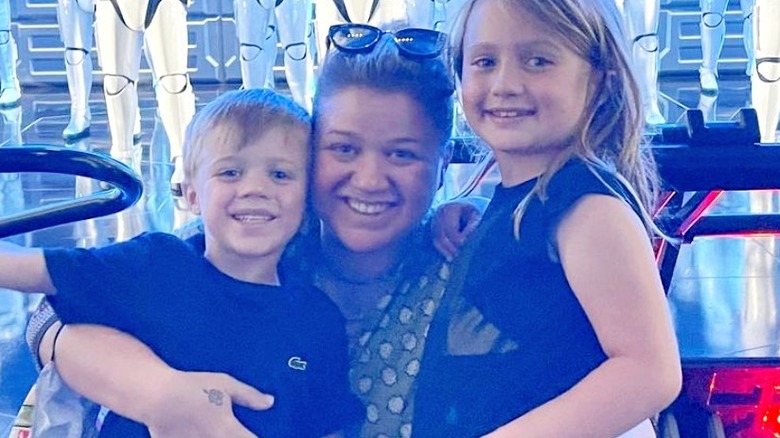 Just call Kelly Clarkson mom of the year! The singer reportedly installed a playground at the Toluca Lake mansion she purchased for $5.5 million, according to a July report from the New York Post.

River and Remy, her two children she shares with ex-husband Brandon Blackstock, apparently have the backyard of their dreams complete with bicycles, pool toys, and a trampoline, per the outlet. Their playground even comes with a playhouse, putting an average swingset to shame. The house isn’t too far from where Clarkson will continue to shoot “The Kelly Clarkson Show,” meaning she probably won’t have to spend a lot of time away from her kids.

If that’s not enough, she also treated her kids to a Disney World vacation in July where they posed in front of Stormtroopers. “We had so much fun at Disney World! … Thank you for a magical vacation, Disney,” she wrote. Although Clarkson is one of the busiest stars in Hollywood, her children remain her first priority. “Kelly has always been such a hands-on mom, and despite her incredibly busy schedule, she’s there for her kids at the drop of a hat,” an insider told HollywoodLife in July. “She’s never let the fame or her celeb status change her outlook on motherhood or how she raises her kids, whatsoever.”