The Beatles and The Rolling Stones are two of the biggest British rock bands in history. And while the musicians have had a friendly rivalry over the years, it’s not always been so rosy. During John Lennon’s famous 1970 Rolling Stone interview, the star was asked what he thought of Mick Jagger’s band at the time and he didn’t exactly hold back.

Lennon said: “I think it’s a lot of hype. I like Honky Tonk Woman but I think Mick’s a joke, with all that fag dancing, I always did.

“I enjoy it, I’ll probably go and see his films and all, like everybody else, but really, I think it’s a joke.”

The Beatle was also asked if he saw much of Mick now the Fab Four had broken up.

Lennon admitted he never sees him, but thinks he became jealous of The Beatles’ success. 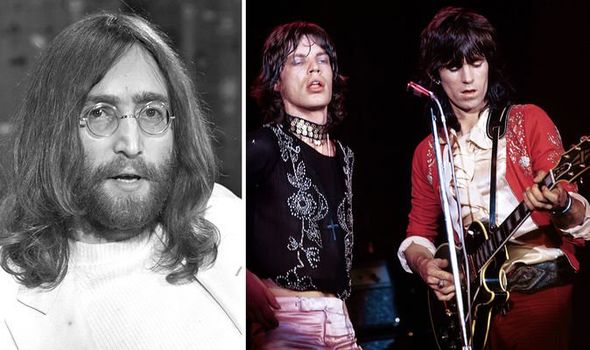 “I was always very respectful about Mick and the Stones, but he said a lot of sort of tarty things about the Beatles, which I am hurt by, because you know, I can knock the Beatles, but don’t let Mick Jagger knock them.

“I would like to just list what we did and what the Stones did two months after on every f***in’ album.

“Every f***in’ thing we did, Mick does exactly the same – he imitates us.”

The Beatle continued: “I resent the implication that the Stones are like revolutionaries and that the Beatles weren’t.

“If the Stones were or are, the Beatles really were too.

“But they are not in the same class, music-wise or power-wise, never were.

He added: “I like rock and roll and the direction they took after they got over trying to imitate us, you know, but he’s even going to do Apple now. He’s going to do the same thing.

“He’s obviously so upset by how big the Beatles are compared with him; he never got over it.

“Now he’s in his old age, and he is beginning to knock us, you know, and he keeps knocking.

“I resent it because even his second f***in’ record we wrote it for him.”

Despite the feuding at the time, respect and good relationships between the bands has only built over the years.

In fact, it was Mick himself who inducted The Beatles into the Rock and Roll Hall of Fame in 1988.

The Rolling Stones singer praised the Fab Four for giving his band their first big hit in the UK by writing I Wanna Be Your Man.

Mick also admitted he was sick with jealously when he first heard Love Me Do, but added: “We had a lot of rivalry and a little bit of friction in those early years, but we always ended up friends and I like to think we still are.”