When Charles Jenkins wrote When I Was On the Moon, he'd never actually been near the place. But songs work in mysterious ways.

Listening to it now, as a lonesome nylon-stringed guitar recording in the spare room of his house, there's an eerie sense that real life had caught up with his subconscious. 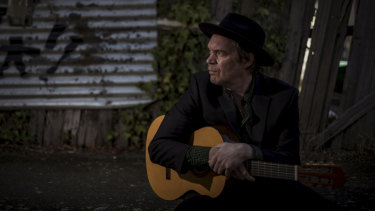 "I discovered at Easter last year that I had a brain aneurysm," he explains, five months since recording the album over three afternoons.

"I fell over in the bath in the middle of the night, suffered concussion, and in an effort to find out what had taken place they discovered this thing."

He launches into an almost compulsive kind of detail. It ran off the artery, he says, pointing to a spot just above the left side of his forehead. It might have been growing there for 10 or 30 years. Blood pumping, pumping …

"Eventually, if you're unlucky, it will explode. And then you're in trouble. You might die or have a stroke." He sips his coffee from an enormous cup. "So I looked at the aneurysm and I thought, 'we probably need to do something about this'."

Surgery was eventually scheduled for December 13. He'll go into more detail about that later. But first, there was the moon.

After 17 albums with different bands — Icecream Hands, The Zhivagos, The Amateur Historians — it's officially right to call Charles Jenkins a master songwriter. The 10 songs that would become When I Was On the Moon had been written, more or less, for a masters degree in lyric writing techniques at the University of Tasmania, where he's taught the dark art since 2014.

For that reason he's a blast to talk with about songs: a walking compendium of wisdom distilled from authorities as celebrated as Stephen Sondheim – "content is form", "less is more", "God is in the detail" – and as academic as Sheila Davis.

"She says a song should be about one identifiable idea," Jenkins says.

"Which sounds so simple, but you'd be surprised. There's far too much crammed in sometimes."

It was partly this learned tendency towards minimalism that led him to record this album under such austere conditions: one room, one guitar, one voice, one microphone, few takes and no further embellishment.

The fact that he chose to do it just days before the kind of surgery in which, he had been soberly advised, "various things might go wrong", invokes the kind of nuances even Sondheim might have trouble quantifying.

To cut to the core idea, "yes, that did occur to me", Jenkins acknowledges.

"The worst-case scenario, yes. There was that fear. And that's why I wanted to do it. Just waste as little time as possible getting decent recordings of these songs."

There's no tangible fear, as it happens, between the gentle thrum and dreamlike poetry of When I Was On the Moon. But with the luxury of hindsight, the sound of a man taking stock is as plain as the birds singing outside his window.

From the minor-key murmur of Do Not Disturb to sentimental memories of Monday Nights At the Retreat Hotel and the salient themes of Every Beat of the Drum and Beware The Gates of Heaven, it's like we're listening behind the full-length mirror in the singer's spare room.

As heartbreakingly tender as "let the lovers kiss their way through this" and as funny as "I could have gone to Paris/and then gone on to Spain/But I ended up in Fairfield in the pissin' rain"; images return again and again to the preciousness of the moment and the inevitability of fate.

"You're right," Jenkins says a bit dubiously, reluctant to surrender the mystery of what is, despite his years of research, far from an academic exercise. 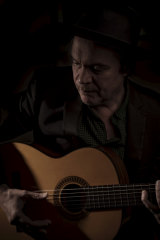 “I’m still getting up in the morning and saying ‘I’m alive’.”Credit:Chris Hopkins

"Two things," he counters. "I reckon the subconscious plays such a hand in songwriting. I don't like to say that too often because they'll drag you off to a Tea Party gig. But it does infiltrate.

"Also, you're mentioning lines where … yes, the songs were written, but right up until the moment where they get recorded, they're tinkered with. Fairfield In The Rain was one of the last songs written for it so … I don't know. I really didn't want my head to be an issue for it, you know?"

Fair enough. Outside the zen calm of the recording room, there was plenty of head stuff to deal with: a will to finalise, a "lack of finances" to get in order and then — surprise! — a second aneurysm, detected during the final pre-op MRI scan. "Thank goodness," he says.

As is often the case with survivors of such high-stakes procedures, Jenkins' gratitude to his saviours at the Royal Melbourne Hospital is almost religious. His Jedi neurosurgeon "looked good, he smelled good, he was just this smooth cat … 'the force' was strong with this one, you know I mean?"

The night before the operation, "the assistant doctor called me up and went through what would take place. At the end of the call he said, 'OK, so now we both go to sleep tonight and we'll dream about the operation, so it'll be fine in the morning'. You've got to visualise this thing! I really liked that."

Finally, there was the anesthesiologist who, he swears, "had the voice of an angel. Honestly, it was just the most remarkable, soothing, mellifluous … right tempo, right rhythm… and off I sailed."

The rest of the story is not for the squeamish. There's a shockingly large scalpel arc somewhere under Jenkins' hairline. There was peeling of scalp and cutting of skull but ultimately, "I'm still getting up in the morning and saying, 'I'm alive'," he says.

The point of a song is that we're all in there together.

"I mean, the beautiful thing is I still wake up, what is it, five months later? And every day is just … I'm alive."

What's more, he'd even had a red-hot crack at some famous last words. These were not to the angel, but to another anesthesiologist who happened to play the piano.

"What can you tell me about songwriting?" she asked as he prepared to go under.

"This woman is going to keep me alive. I better give her some gold here," Jenkins thought. "So I reached for the top shelf. Songwriting pearls. I skipped two years of tertiary education and I said, 'There are three things you should put in your song if at all possible …'

"One. Every song needs to have an image. If I describe the red pillowslips, straight away you see the bed and the room that they're in and … what happens is the listener becomes invested in the song.

"Two. If you can name something, do it. The process there is that to name is to have seen, and to have seen is to know. So you sound like you know what you're talking about, even when you don't. Got it?

"Three. Give people something to sing along to. I know that sounds really obvious but what happens is … they're participating in the song. They want to participate. This whole audience/performer [division] is, I dunno, 800 years old? The point of a song is that we're all in there together."

Olivia Rodrigo's 'Sour' Returns to Number One on RS 200