Iggy Azalea worked with Britney Spears back in 2015 when the two entertainers joined forces for the pop hit “Pretty Girls.” While you might think that a song featuring these two mega artists was sure to be a success, it actually didn’t do as well as the two had hoped, and Azalea spoke out about this in the past. “It’s difficult to send a song up the charts without additional promo and TV performances, etc. Unfortunately, I’m just featured [on the track]. I would have enjoyed performing it a lot. I think it got off to a powerful start, but you need content to compete in 2015,” Azalea tweeted to a fan at the time, seeming to place the blame directly on Spears, according to Vulture. The media then cooked up a feud between the two women, which lasted until March 2016, when Azalea said that she and Spears were “cool,” according to Billboard.

In the midst of Spears’ conservatorship battle, Azalea was called out on social media for not supporting Spears. However, on June 25, she retorted on Twitter writing, “I said her team wouldn’t let her do promo and that they went through my house etc and y’all said I was a hater.” On June 30, Azalea had even more to say about the case in support of Spears. Keep reading to find out what she posted. 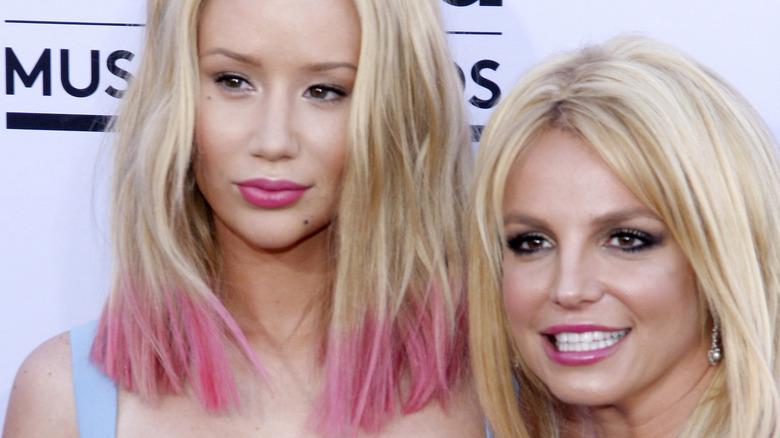 Iggy Azalea took to Twitter on June 30 to share a lengthy statement about Britney Spears, and her own experience with Spears’ father, Jamie Spears. “[It’s] basic human decency to at the very least remove a person Britney has identified as abusive from her life. This should be illegal,” Azalea wrote. “During the time we worked together in 2015, I personally witnessed the same behavior Britney detailed in regards to her father last week and I just want to back her up & tell the world that: She is not exaggerating or lying. I saw her restricted from even the most bizarre & trivial things: like how many sodas she was allowed to drink. Why is that even [necessary]?” Azalea continued.

“Her father conveniently waited until literally moments before out BMAs performance when I was backstage in the dressing room & told me if I did not sign an NDA, he would not allow me on stage. The way he went about getting me to sign a contract, sounded similar to the tactics Britney spoke about last week in regards to her Las Vegas show. Jamie Spears has a habit of making people sign documents while under [duress] it seems, and Britney Spears should not be forced to co-exist with that man when she’s made it clear it is negatively impacting her mental health,” Azalea’s Twitter statement concluded. She added the hashtag “#FreeBritney” to the post.

Moments in Harry Styles’ Golden video that have fans talking

Sum 41 cancel gig after explosive device detonated near to venue