Genesis say they are in rehearsals ahead of September shows

Genesis haven’t performed together since a reunion in 2007 and last year were set to head off on their The Last Domino? tour. But due to the coronavirus pandemic, the UK and Ireland dates were pushed back to April 2021, with two extra dates. But now, in our third national lockdown, Phil Collins, Tony Banks and Mike Rutherford have understandably had to postpone the tour once again.

Genesis released a video today showing the band in rehearsal, with singer Collins, who has struggled with health problems in recent years, sat down.

An accompanying message said: “We’re ready, but the world isn’t… yet!”

“Genesis are rescheduling their April UK and Irish tour dates for autumn 2021 in light of the ongoing pandemic. The Last Domino? Tour 2021 will now start in Dublin on 15th September and is set to be Tony Banks, Phil Collins and Mike Rutherford’s first live outing together since the globe-trotting, sell-out Turn It On Again: The Tour in 2007.

“They will be joined on stage by Nicholas Collins on drums, and the band’s long time lead guitar and bass player Daryl Stuermer.” 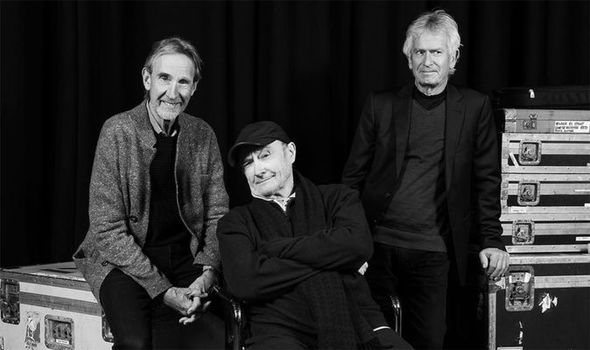 Genesis reassured fans: “Tickets for all rescheduled dates are available through genesis-music.com.

“All previously purchased tickets remain valid and ticket holders will be contacted by their ticket agent.”

The Last Domino? Tour will star in Ireland before moving to England’s Midlands, then head up north all the way to Glasgow, Scotland before concluding at London’s The O2.

Here is the full list of rescheduled Genesis 2021 tour dates:

While Collins’ son Nicholas will be playing the drums on the Genesis reunion tour, the 69-year-old star is adamant he will perform on the instrument for some of the time.

The Genesis legend has suffered nerve problems in his hands in recent years, so has had to rely on his son.

When The Last Domino? tour was announced last year Collins told BBC Radio 2: “For me, it wasn’t a deal-breaker but it was something that was working and it was a problem that we had to overcome with me not playing.

“Although I’m going to be doing my best to play some bits on the tour.”

Collins continued: “So I’ve got to start really seriously thinking, but I have been working at what I’ve got to do and what songs to play on.”

The singer then alluded to his croaky voice saying: “Excuse my voice because I’ve been a bit sick.”

On Nicholas’ drum playing, which he’s done for his dad’s solo shows in recent years, Collins added: “He plays a bit like me when he wants to…but I’m one of his many influences, of course, being his dad.

“And he plays like me and he has the same attitude as me, so that was a good starter.”