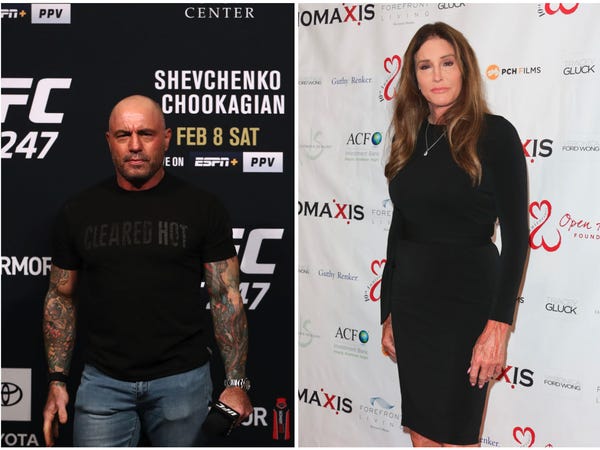 Caitlyn Jenner responded to Joe Rogan's unfounded suggestion that she was transgender as a result of living with "crazy b—-es" in the Kardashian household.

"He's a homophobic, transphobic a–," Jenner said in an interview with TMZ.

In an episode of Rogan's podcast on Friday, the comedian and podcast megastar recounted a joke he had previously made in a comedy routine. Rogan told Tim Kennedy, a retired mixed martial arts fighter who was the episode's guest, that he questioned people who said Jenner had always been a woman.

"I was like, 'Maybe. Or maybe if you live with crazy b—-es long enough, they f—-ing turn you into one. Maybe you go crazy,'" said Rogan, who is scheduled to exclusively stream his podcast, "Joe Rogan Experience," on Spotify as part of a $100 million deal.

Throughout the episode, Rogan continued to deadname Jenner, referring to her by the name she previously used, and misgender her. Rogan has made several transphobic comments in the past, making the claim that being transgender is a "social contagion" in a July podcast episode.

Lucas Acosta, a press secretary for the Human Rights Campaign (HRC), told Insider that making an anti-trans joke "dehumanizes an entire community that is already marginalized."

In her interview with TMZ, Jenner said Rogan found fame by "putting other people down and making jokes about it." As for Rogan's claim that a person being transgender could be linked to their home environment, Jenner said, "It's not even close. I've been gender dysphoric my whole life."

She continued: "Being gender dysphoric, transitioning, all of that, is not a joke. It's very serious stuff concerning family, friends, society, all of these types of things, and I just feel like Joe Rogan has a lot to learn."

Jenner said that she's incredibly happy in her life now after transitioning. "I wake up in the morning every day and I'm so happy because I can just be myself all day," she said.

Jenner also took issue with Rogan's characterization of the Kardashian women. "They are intelligent, they're extraordinarily hard-working, and that's how they've made their businesses and their fame. They didn't do it by making jokes about other people and putting them down," she said.

Jenner said she would "of course" be a guest on Rogan's show, because he "needs some help" understanding her transgender identity. But, she said, "If I were sitting right in front of him, he would treat me a lot differently."

Thundercat Gets Galactic and Introverted on New Song 'Innerstellar Love'