The last time Clare Bowditch stepped on stage at the Corner Hotel, she was 23 years old.

About two decades and three children later, and a successful career spanning radio and acting gigs, she was back to launch new single Woman, an empowering anthem for ladies of all ages.

In a black and white dress and surrounded by her five-piece band, she bounded onto the stage with enthusiasm and dance moves she said she'd been practising. 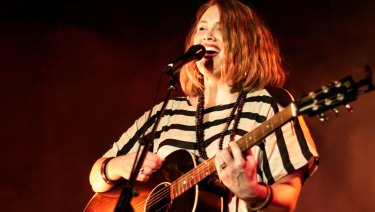 Straight from the heart: Clare Bowditch at the Corner on Saturday night.Credit:Darren Middleton

Bowditch powered through old favourites under the orange and red lights, including You Look so Good, Divorcee at 23 and The Tea and the Toast, which she dedicated to her husband and drummer, Martin Brown.

A Bowditch gig is very much like being taken into the arms of a close friend.

A Bowditch gig is very much like being taken into the arms of a close friend. "If you don't have your family, we will be your family," she said, inviting cousin Joel Bowditch on stage to sing One Little River.

Bowditch has been busy writing a memoir, and her performance was peppered with stories of her development as an artist and a woman. She dispensed sage advice and childhood stories with self-deprecating humour and an evidently deep respect for her family and fans.

"I do believe our lives are the stories we tell ourselves," she said.

"So many have a dream on the shelves for someone who is better than ourselves. Before I knew I would be the person to do this with you on Saturday night, I pushed my dreams down. The story I told myself was fat girls don't get dreams like that."

It was watching the late Jeff Buckley perform at a record store in 1996 that made her feel her dreams mattered, she said, launching into a touching, acoustic version of You Want an Amazing Life and then leading the audience through a five-minute visualisation on achieving your dreams.

Bowditch really shone in Strange Questions and Thin Skin, encouraging the audience to participate: "If you can talk, you can sing."

Start a War is a powerful song but here, the guitars slightly overpowered her vocals.

The penultimate song of the night, Woman, was written five years ago after a night with girlfriends who helped quell Bowditch's rising anxiety. It seems apt to release it now in the post #MeToo era.

"This is a love song for the women in our life … I went out feeling stronger because of them," she said.