Eight months into live music’s pandemic-mandated shutdown, can livestreams offer anything we haven’t already seen? Billie Eilish’s “Where Do We Go? The Livestream” concert on Saturday night seemed highly cognizant of that question — serving up a meticulous visual affair, replete with lofty LED screens and extended-reality (XR) effects, that felt determined to recapture weary viewers’ attention.

With the feel of a highly produced music video, the show, which charged $30 a ticket, hit on all the strengths of livestreaming. Enormous animated creatures and chimeric landscapes whirled by around Eilish, her brother Finneas, and her drummer Andrew Marshall as they played into multiple roving cameras from a 60-by-24-foot stage. The trio’s sparse physical presence made for a striking silhouette to the rapidly shifting scenery, while the occasional close-up quick cut allowed the audience to feel like they were inside the performance itself. On a sidebar, fans had the ability to type into a chatroom and purchase Eilish’s merchandise.

“I can’t even tell you how bad I wish I could be on tour,” Eilish said onstage. “During quarantine, I think I realized that the only place I’ve ever felt myself, like I belong, is in front of you guys and with you guys.”

Billie Eilish Reveals Details of 'Where Do We Go?' Immersive Livestream

Before the Landslide: Inside the Early Years of Fleetwood Mac

Her setlist featured a potpourri of hits like “Xanny,” “When the Party’s Over,” and “Ocean Eyes,” as well as her James Bond theme “No Time to Die” and her recent track “My Future.” Between songs, she also revealed that she and Finneas are working on her next album; shouted out the crew members who served as a substitute audience; and implored fans to vote in the upcoming election (“If we vote the orange man out, maybe we’ll get to see each other again. Trump is the worst!”).

Eilish performed from a studio stage in Los Angeles, but the show spanned cities, oceans, and worlds with its rapid-fire visuals. For “You Should See Me in a Crown,” the singer walked circles underneath a bus-sized spider, and during “Everything I Wanted,” a wall of fans’ faces came up to join Eilish on stage; later, she was devoured by the hulking white teeth of an animated shark, before reemerging to sing from the moon.

Behind the scenes, the production was similarly sprawling. Montreal-based creative production team Moment Factory (which has had worked with Eilish on in-person shows in the past), extended-reality group XR Studios, Los Angeles interactive studio Lili Studios, and livestreaming platform Maestro (which has also put on Covid-era shows for Melissa Etheridge and Tim McGraw) all worked on the design of the show. Maestro specializes in virtual-, mixed-, and augmented-reality concert design, while Lili helped bring brand sponsorships with partners including Fender and Gucci.

Speaking of Gucci, the fashion house debuted a new season’s campaign, featuring Eilish, during the pre-show — which was one of the most unique aspects of the livestream. While Eilish took the live stage at 6 p.m. E.T., viewers were able to tune into pre-recorded videos starting one hour earlier, where they found Gucci’s new campaign, as well as a first look at Apple Music’s Eilish documentary, some backstage footage, interactive quizzes, shoutouts from the likes of Steve Carrell, Alicia Keys, and Lizzo, and a short introduction to the back-of-house production staff filmed by Eilish herself.

“It’s important you know that people are losing jobs,” Eilish told fans from a handheld camera, referring to the financial damage that Covid has wrought on the live music industry, as she went around speaking to crew members. “So it’s important that we do this.” Eilish canceled her sold-out 2020 world tour in May due to the pandemic and has not yet offered rescheduled dates and venues. Portions of sales from her Saturday show also went to Crew Nation, a Covid relief fund created by Live Nation. 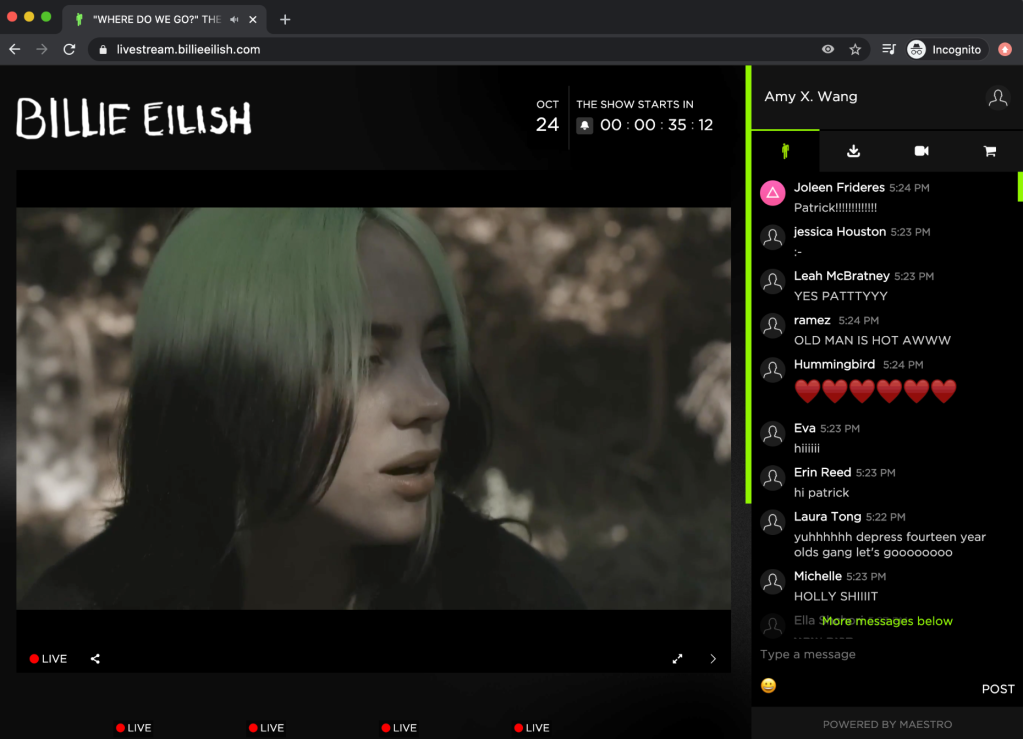 A sidebar allowed fans to share messages during Eilish’s pre-show and show.

Both the pre-show and the show laid out a refreshingly honest value proposition for Covid-era livestreaming: You’re not paying to see a live concert substitute; you’re paying to see a technological feat, to connect to music in a new way, and to support artists and crew members in a time of urgent need. If you’d put the livestream into a background tab and not paid any attention to the screen, then Eilish’s show might have seemed almost identical to a pared-down live show — I closed my eyes for a bit and heard the sound of Eilish’s set at Apple’s Cupertino theater in December last year — but you’d also have been missing the point.

(Another benefit of livestreams, by the way: All my nostalgia for live shows aside, it was extremely pleasant to wait only six minutes between pre-show and show, as opposed to, say, idling in a squeezed mass of people for an hour and a half.)

Eilish’s team, which controls the audience data from the livestream under Maestro’s business model, declined to provide details on the number of tickets sold. But high-resolution pay-per-view livestreams have proved a runaway success for established artists like BTS, which generated around $20 million in a single concert. In under a year, livestreaming has gone from a niche, shrugged-aside field into a juggernaut of the music business, with fresh investors including J Balvin, Scooter Braun, and Justin Bieber — though artists and production companies do have to fight a crowded landscape of competitors to make their projects stand out. According to Bandsintown, several thousand music livestreams are being put on every month, from superstars and emerging artists alike.

Eilish closed the set with “Bad Guy,” her Grammy-winning 2019 hit that took viewers back to quixotic pre-pandemic days. “Bad Guy” was also the most visually dizzying production of the night, putting Eilish and Finneas in quick-paced flashes of color as silhouettes of cars, people, and other objects circled around them, like a hallucinatory version of an early 2000s Apple iPod commercial.

And then it was over. (Highly choreographed digital livestreams are not, it turns out, ideal settings for encores.) “Vote, for God’s sake,” Eilish shouted into the mic a final time, before cameras panned out to show the scope of production — thick wires galore, clumps of production staff, and huge soundboards surrounding the screen-paneled stage — and the credits began to roll.