Never fashionable and never out of fashion, The Proclaimers’ alchemy has never really changed: they still have lungs of steel and harmonies of pure silver. 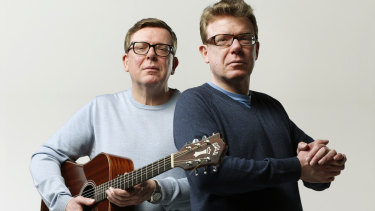 Three decades have rendered the Reid brothers only slightly less identical, but they remain a potent touring act, their Scottish work ethic punching out two dozen tunes in a 90-minute set including a rollicking three-song encore.

Stepping up with Angry Cyclist, the title song of their eleventh album, their set mixes politics and powerful hooks in an at-times breathless sprint.

Craig (tambourine, thumping right leg) and Charlie (guitar, thumping left leg) create a wall of sound all by themselves, diction clear as choir boys, projecting those long Caledonian vowels to the back wall. There Is a Touch and Over and Done With keep the tempo up before the first sing-along takes hold. Letter From America has the crowd, heavy with Scottish brogue, in full voice.

The old ones have worn well in the 30 years since they first toured to Australia.

Should Have Been Loved and Born Innocent rock like the E Street Band, showing that though The Proclaimers may be folk influenced, they are a bluesy rock band when the mood takes them. And so often it does.

Scarves aloft and arms swaying, Sunshine on Leith was a real highlight, and many a hand was fondly squeezed during Let’s Get Married, the ferocious and funny paean to connubial bliss. Streets of Edinburgh, another new song, has that "classic in waiting" feel.

The set ended where it must, at I’m Gonna Be (500 Miles), with fans bouncing on the spot as the brothers’ infernally catchy bah-da-da-dah ricocheted off the roof.