Via their craft, artists have an ability to quickly unriddle anxieties around social and political upheaval. Russian-American pianist Kirill Gerstein appeared to offer such an act in his Melbourne Recital Centre debut, the latest in the venue’s Great Performers series.

This eclectic yet thoughtful program contemplated human struggle and mortality, musing upon the many facets of our ultimate fate. Far from being a morbid affair, the sheer elan of Gerstein’s playing spoke more of resilience than sorrow, invoking the spectre of death as a means to better appreciate life’s joys. 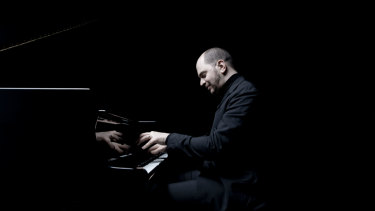 This wasn’t the only paradox of the evening. Gerstein is a performer capable of near-infeasible dualities, issuing crisp, steel-edged articulations even in the muddiest depths of the instrument, playing with concentrated force even at the softest dynamics, and mastering the most fiendish passages with seemingly meditative ease.

Gerstein masters the most fiendish passages with seemingly meditative ease.

The musical memento mori began with a dazzling ode to the heroic, through Liszt’s Transcendental Etude No. 7 and Beethoven’s Variations and Fugue, both nicknamed Eroica. Gerstein’s hero seemed not to be the glorified archetype but a more human, embattled figure, shades of questioning delicacy coming to the fore.

This emotional nuance also rang true in Janacek’s Sonata 1.X.1905, a work inspired by the death of a political protester, its defiant fury simmering beneath a calmer surface tension.

Reflection and introspection characterised much of the second half, in the portentous toll of the death knell in Litsz’s Funerailles and the quiet yearning of Debussy’s Elegie. But life sprang anew in a breathtaking account of Ravel’s homage Le Tombeau de Couperin, bringing with it a cathartic sense of hope.

Scarlett Johansson gives birth as she welcomes her second child