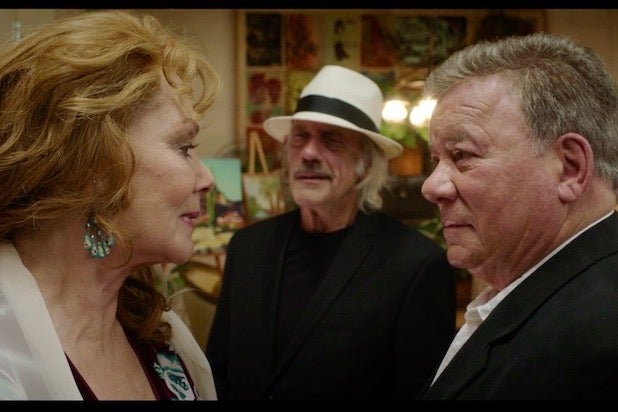 Screen Media has acquired the worldwide rights to “Senior Moment,” a comedy starring William Shatner, Jean Smart and Christopher Lloyd, and the distributor will release the film in theaters and on-demand in March.

Giorgio Serafini directed the film that stars Shatner as a retired NASA test pilot who gets his license revoked after drag racing his vintage Porsche convertible, forcing him to take public transportation for the first time. But while taking the bus, he meets his exact opposite in Smart, who helps him learn to love life again and win him back his license and car.

“Giorgio and I are thrilled to be working with Screen Media and bringing this feel-good story to audiences looking for a fun movie,” Goff said in a statement.

“We’re excited to share this hilarious and heartwarming title with audiences everywhere,” Screen Media said in a statement. “William Shatner and Jean Smart’s characters will make you laugh out loud, renew your sense of hope, and serve as a reminder that it’s never too late to find love.”

Clay Epstein and Film Mode Entertainment are handling foreign sales of “Senior Moment” and will present the film to buyers at the 2021 European Film Market.

The deal was negotiated by Seth Needle, SVP of Global Acquisitions and Co-Productions, on behalf of Screen Media with Endeavor Content on behalf of Goff Productions.

Screen Media also recently picked up the documentary “Street Gang: How We Got to Sesame Street,” which is debuting at Sundance and airing on HBO, and the comedy “Off the Rails.”

The Many, Many Reasons Sean Astin Was Trending on Twitter