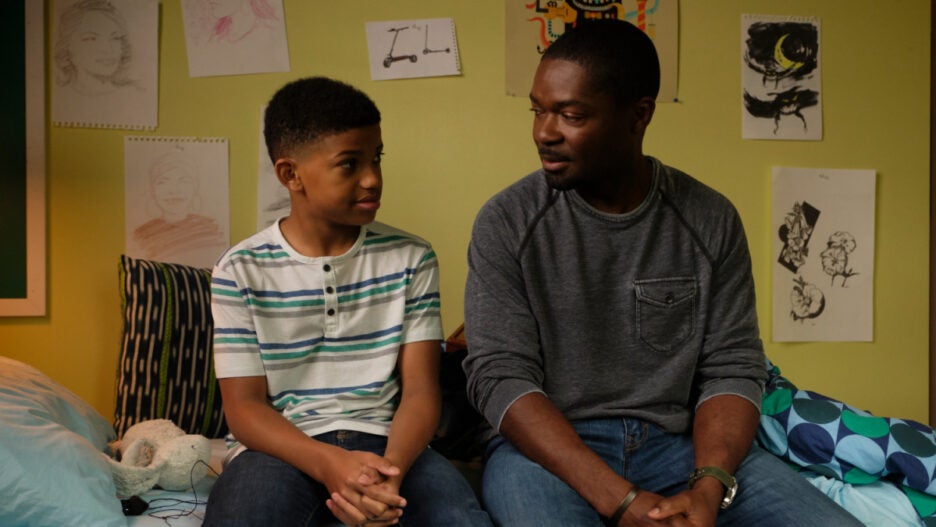 We’ll probably spend the next decade or so speculating on the impact certain films might have made had they not been released in the midst of a worldwide pandemic. One movie that could have had a bigger splash was “The Water Man” (RLJE Films), David Oyelowo’s impressive directorial debut. It’s a rousing kid adventure and a poignant family tale, and he very skillfully threads the needle between those two genres. Like many an actor-turned-director before him, Oyelowo displays a sure hand with the fine ensemble he’s assembled, including young actors Lonnie Chavis and Amiah Miller and veterans Rosario Dawson, Alfred Molina, and Maria Bello.

Also available: The Criterion Collection continues to preserve the best Netflix originals to physical media, the latest being the intense “Beasts of No Nation,” starring Abraham Attah and Idris Elba in an appropriately brutal tale of child soldiers; “Overwhelm the Sky” (Kino Lorber) is a black-and-white indie noir based on a novel from 1799; Charlie Tahan (“Ozark”) plays a college grad who’s driving the “Drunk Bus” (FilmRise) until he can get his life started.

Who Will Start Another Fire: A Short Film Anthology by Emerging Filmmakers (Kino Lorber) collects work by nine directors from underrepresented communities; Michael Paré plays an Old West bounty hunter at odds with himself in “Righteous Blood” (Alliance/Artstone); the one-woman show “Emily at the Edge of Chaos” (Kino Lorber) features voice-over, and has been praised, by Lily Tomlin, who knows a thing or two about one-woman shows. (More Lily Tomlin below.) 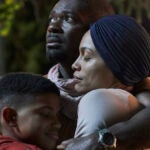 One of the best films of 2021 that you may well have missed is “Riders of Justice” (Magnolia Home Entertainment), at least partially because that title does it no favors. What sounds like a biker saga is actually a brilliant drama, starring Mads Mikkelsen, that deftly leaps from comedy to tragedy to thriller as a widower and his daughter and a group of statistics nerds set out for vengeance, only to bump into the random and chaotic nature of existence. It’s a film that takes on a lot, but does it all brilliantly, never losing sight of its rich character detail as it ambitiously takes on a sprawling story.

Also available: François Ozon’s Rohmer-esque “Summer of 85” (Music Box Films) starts out as a sun-soaked gay teen love story before taking on some unexpected, darkly comic twists; not to be confused with the Ron Howard movie, Macedonian Oscar entry “Willow” (Kino Lorber) threads together three stories of women from different eras, directed by Milcho Manchevski (“Before the Rain”); when a famous chef goes blind, he forms an unexpected bond with guide dog “Little Q” (Well Go USA Entertainment) in this sentimental Chinese import.

Emmanuelle Devos stars as an olfactory perfectionist in the charming “Perfumes” (Icarus Films Home Video); people can get any dish they desire at the “Midnight Diner” (Well Go USA Entertainment) in this adaptation of the popular manga starring and directed by Tony Leung (“The Lover”); in Ghana’s “Nakom” (Corinth Films), a young medical student is torn between his ambitions to the future and his familial obligations in his agricultural village. 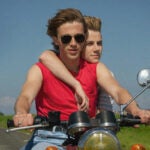 “Documentary Now!” devotees and Sondheim fanatics alike can rejoice that “Original Cast Album: Company” (The Criterion Collection) is finally back in print. The basis for the parody series’ “Co-Op” episode — featured on this new Blu-ray, among many extras — D.A. Pennebaker’s film about the creation of a legendary Broadway cast album was intended to be a pilot for a series that never got off the ground. Still, this singular doc has gone on to become a legendary glimpse at the creative process in general and of a paradigm-shattering musical in particular. Everybody rise.

Also available: The grand-daddy of all cheeseball 1970s documentaries about aliens and/or the apocalypse, “Chariots of the Gods” (VCI) gets a 50th anniversary reissue; “Truman & Tennessee: An Intimate Conversation” (Kino Lorber) examines the friendship of two of the 20th century’s leading queer authors; Orson Welles narrates 1981’s “The New Deal for Artists” (Corinth Films), which examines the WPA’s groundbreaking program to provide federal support for creatives.

If “Pig” left you with questions about aromatic fungi and the animals that find them, “The Truffle Hunters” (Sony Pictures Home Entertainment) might provide some answers; “The Phantom” (Greenwich/Kino Lorber) recounts the shocking true-crime story of an innocent man executed while a serial killer remain uncaptured; the unsung contributions of a trio of 19th and 20th century musicians are explored in “Women Composers” (Film Movement).

“Against the Current” (Zeitgeist/Kino Lorber) examines the multiple journeys tackled by a trans woman who set out to be the first person to kayak around Iceland; Armenian expats living in Canada offer contrasting views of their homeland and culture in “Stone Time Touch” (IndiePix Films); Florida clean-water activists take on phosphate mining companies in “Phosfate” (Cinema Libre). 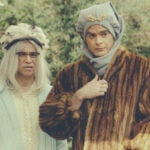 Before Anna Biller recreated 70s softcore horror with exquisite attention to detail in “The Love Witch,” she wrote, directed, and starred in “Viva” (Kino Lorber), in which she turned her unerring eye to the details and excesses of the suburban-swinger exploitation flicks of the Sexual Revolution. Two suburban couples experiment with drugs and sexual freedom and, of course, learn hard lessons along the way, and Biller once again displays her gift for recapturing lost time in everything from the dialogue delivery to the upholstery on the furniture.

Simon Barrett’s “Séance” (Shudder/RLJE) summons some spooky spirits to a girls’ boarding school; Chris Rock resuscitates a popular franchise with “Spiral: From the Book of Saw” (Lionsgate); when swinging stud “Percy” (Code Red/Kino Lorber) dies, his legacy lives on in the form of a nerdy guy’s penis transplant in this outrageous 1970s sex comedy.

Pledge week is even more of a killer than usual in “Initiation” (Lionsgate); a crime reporter copes with the aftermath of a crazed fan’s attack in the Norwegian thriller “Lust” (Jinga/MVD); an influencer is “Shook” (Shudder/RLJE) when she has to solve a series of games to save her friends’ lives; in the grand tradition of misleading genre titles, “The Fatal Raid” (Well Go USA Entertainment) is indeed a rousing and violent crime drama, but it is in no way affiliated with the Iko Uwais classics.

An author finds herself targeted by a mystery man in the time-loop saga “Lucky” (Shudder/RLJE); a nanny comes to work on a coffee plantation and makes a horrifying discovery in “Through the Shadow” (Jinga/MVD), a Brazilian take on “The Turn of the Screw”; “Tailgate” (Film Movement) offers a suspenseful Dutch spin on Spielberg’s road-rage classic “Duel”; Patrick Fugit stars in the unsettling family thriller “My Heart Can’t Beat Unless You Tell It To” (Dark Star Films).

I once got to interview Lily Tomlin, and I told her that if “Moment by Moment” (Kino Lorber) had been released in French, it might have been taken more seriously. Infamous for derailing John Travolta’s white-hot early film career — and admittedly deserving of some raised eyebrows over Travolta and Tomlin having the same haircut, and for naming Travolta’s character “Strip” — this film from Tomlin’s longtime partner Jane Wagner merits reevaluation as a film that tackles two topics rarely covered in American film: class and female sexuality. There’s a bit of Malibu lugubriousness to the narrative, but this is a movie that’s aiming for something ambitious, and it hits at least as often as it misses. After being unavailable for many years on physical media, this new Blu-ray offers a ripe opportunity for rediscovery.

Marlene Dietrich and Gary Cooper set off sparks in “Desire” (Kino Lorber); the Ross Hunter–produced “Back Street” (Kino Lorber) afforded Susan Hayward the opportunity for some of her most glamorous on-screen suffering; “The Emperor Waltz” (Kino Lorber) doesn’t rank high in either man’s filmography, but it’s the answer to the trivia question, “What Bing Crosby movie was directed by Billy Wilder?”; Dick Van Dyke plays a larcenous butler trying to keep his no-longer-wealthy employer with a roof over her head in the farcical “Fitzwilly” (Kino Lorber).

Sidney Poitier won a history-making Oscar with his lead role in “Lilies of the Field” (Kino Lorber); “The Devil’s 8” (Scorpion-Kino Lorber) proves that making a low-budget “The Dirty Dozen” means having two-thirds as many leads; Mary Tyler Moore asks, “What’s So Bad About Feeling Good?” (Kino Lorber) in one of her ill-fated big-screen projects between her two legendary sitcoms; and to be fair to Ms. Moore, the 1960s did also offer “Thoroughly Modern Millie” (Kino Lorber), in which she’s a delight opposite co-stars Julie Andrews and Carol Channing.

Alan Ladd and Geraldine Fitzgerald smash Nazi spies in “O.S.S.” (Kino Lorber); the legendary collaboration between Gene Kelly and director-choreographer Stanley Donen began with the frothy period musical “Take Me Out to the Ball Game” (Warner Archive Collection), co-starring Frank Sinatra and Esther Williams; the new Kino Lorber Blu-ray of the German sci-fi classic “F.P. 1 Doesn’t Answer” — Peter Lorre’s final German film before emigrating to the US — also includes the English-language remake, “Secrets of F.P. 1”; Joel McCrea and Barbara Stanwyck battle anyone getting in the way of a transcontinental railroad in Cecil B. DeMille’s “Union Pacific” (Kino Lorber).

Kino Lorber Studio Classics releases a quartet of classics from Vincent Price, from the tongue-in-cheek “The Raven” and “The Comedy of Terrors” to the more intense “The Last Man on Earth” and “Master of the World”; one of the screen’s best Stephen King adaptations, “The Dead Zone” (Scream Factory), gets a new “Collector’s Edition” featuring a new 4K scan as well as new interviews and commentaries; Hirokazu Kore-eda’s “After Life” (The Criterion Collection) examines the recently deceased who have one week to select a single memory they will keep with them for all eternity; Andrzej Wajda’s classic “Ashes and Diamonds” (The Criterion Collection) explores the rift between Polish resistance fighters and Soviet forces as they attempt to forge a path for post-WWII Poland.

Created by filmmaker Gareth Evans (“The Raid”), “Gangs of London”: Season 1 (RLJE Films) explores the power vacuum left behind in the city’s underworld after the death of mob boss Colm Meaney. As various factions vie for control of this billion-pound organization, shadowy figures from above begin to make themselves known. Called “‘Game of Thrones’ without the dragons” by one critic, this tale of backstabbing and intrigue merits a binge.

Also available: 1957’s “Code 3: LA Sheriff’s Case Files” (MPI Media Group) tried to do for the LA County Sheriff’s Department what “Dragnet” did for LAPD; fans and critics alike continue to clamor for “Star Trek Discovery”: Season Three (CBS/Paramount); in the Finnish noir “Bordertown”: Season 3 (Kino Lorber), a killer seems to be well familiar with earlier cases from the investigator tracking him down.

An Amazon warehouse worker gained TikTok fame by secretly posting videos of his job. Then HR found out.