In 1966, a pouty-mouthed Udo Kier made his movie debut in a zippy short called “Road to Saint Tropez,” playing a gigolo who has a fling with an older woman. Their day at Baie des Anges is a romp, but by the time they get to the film’s title beach town, he breaks her heart.

This summer, Kier is again in a movie that was shot by the water. But it’s nowhere near the French Riviera, and he’s no lady killer.

In “Swan Song,” a new movie from the writer-director Todd Stephens, Kier plays Mr. Pat, a flamboyant former hairdresser languishing in a grim nursing home outside Sandusky, Ohio, a working-class city on the Lake Erie shore. With the promise of money, he hitchhikes into town to fulfill the wish of his recently deceased ex-client Rita (Linda Evans): that he style her corpse’s hair and makeup for her open-casket funeral.

When it came to the role, Kier said he “had no fear whatsoever,” a tombstone-worthy way to describe his own career, which has been defined by unreserved performances as outré characters for renegade directors.

“I was looking forward to making the movie because I don’t ever want to say: I can’t do that,” he said. “I would go as far as to say it was like a dream project for me.” 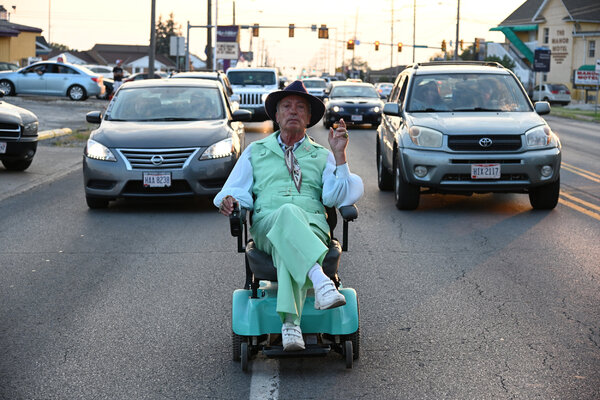 “Swan Song,” now in theaters and on demand starting Aug. 13, completes Stephens’s indie Ohio Trilogy, which began with writing “Edge of Seventeen” (1998) and co-writing and directing “Gypsy 83” (2001), stories of Gen X gay boys itching to leave Sandusky for New York. With Mr. Pat, the trilogy shifts its spotlight to an older gay man who built a life in Ohio.

Stephens said he spent more than a year trying to cast the right actor to play a Stonewall-generation peacock who favors fancy fedoras and mint-green leisure suiting. Then a casting director brought up Kier.

“I hadn’t thought of him because he’s German,” said Stephens, who based the character on Pat Pitsenbarger, a hairdresser and drag performer he encountered as a teenager exploring his own sexuality in Sandusky’s gay circles in the ’80s. “I had always thought of him in villain roles. But on the other hand, he’s so amazingly fabulous. Mr. Pat had big blue eyes like Udo. As soon as I met him, I knew he was Mr. Pat.”

Over five decades as an actor, Kier has put those ice-blue eyes to provocative use as a vampire for Paul Morrissey (“Blood for Dracula” in 1974), a psychiatrist for Dario Argento (“Suspiria” in 1977), a john for Gus Van Sant (“My Own Private Idaho” in 1991), and a demon and a baby for Lars von Trier (“The Kingdom” series in the ’90s). He was Madonna’s dungeon companion in her 1992 book “Sex.”

Still to come for the prolific actor are the dark comedy “My Neighbor, Adolf,” in which he plays a man suspected of being Hitler, and a recurring role in the second season of the Amazon Prime series “Hunters,” about Nazi hunters.

With “Swan Song,” Kier scored a rarity for an actor at 76: a juicy leading role. Over the phone from his home in Palm Springs, Calif., Kier took the conversation in multitudes of directions. These are edited excerpts.

How does it feel to have a leading role?

In all the films I did, from “Blade” to “Shadow of the Vampire,” I always had — I hate that word supporting — I had smaller roles. This is the first time after “Dracula” and “[Flesh for] Frankenstein” that I played the lead. I’ve always wanted to play a villain in a James Bond film, but somehow that didn’t happen.

Tell me about shooting with Linda Evans.

In Germany, they called “Dallas” and “Dynasty” street cleaners because when they were on television, nobody was in the street. [Laughs] I first met her in a restaurant the night before we were going to shoot, and she was so normal. I was surprised because she wanted to rehearse and rehearse and rehearse. I liked that.

When we were shooting, we were real. There was no acting. I learned over the years that the good actors are the nicest people. It’s only the insecure who complain all the time. Linda is one of the nicest.

How much did Sandusky influence your making of the film?

Everything was wonderful, easy. The main street became for me like the studio at Paramount. I wanted to make the movie as chronologically as possible. Since we started in the retirement home, I slept there alone without a camera and got a feeling for the corridors and for the bathrooms. Then I had an apartment in Sandusky.

Was there a gay man from your past who inspired your performance?

There were many. There were still friends of the real Pat around, and they told me how he’d hold his cigarette. There were also little things over my life that I have seen in clubs or privately, how people, when they sit down, put one leg over the other just so. But I also wanted to go away from clichés. I did not want to say, “Yes, girl.”

Do you identify anywhere under the L.G.B.T.Q. umbrella?

You’ve worked with some true gay auteurs, including Fassbinder. What’s your favorite memory of him?

I met Fassbinder when he was 15, and I was 16, in Cologne in a working-class bar with a mix of truck drivers and secretaries. I went to London to work and learn English. One day I bought a magazine with his face on it calling him a genius and an alcoholic, and I thought, that’s Rainer from the bar.

When I went back to Germany, he offered me a role in “The Stationmaster’s Wife” and that was our first work together. We made a lot of movies together. We also lived together. Somewhere it says that we had an affair, but that’s a lie. He was the only director who captured how Germany was after the war.

Is there a film of yours people might not know about but you wish they’d discover?

I did “House of Boys,” a very important film for the gay community. It’s set [in 1984] in a nightclub in Amsterdam, which my character runs. The boys are there doing stripping, and I come out like Marlene Dietrich. The film is important because AIDS was coming, and nobody knew what AIDS was. I think it’s something people should see.

In “Swan Song” and in real life, there’s a generational divide between older gay men who remember the worst years of AIDS and younger men who don’t.

Cookie Mueller, my good friend, died of AIDS. I also lost many friends in Germany. In front of the camera, I had that in mind.

[Laughs] I don’t care. I guess if someone said that I had seven hours to live, I would have a party with wonderful drinks. After seven hours, I would jump in my pool and not move anymore. People would say, “He’s so good! Look at how long he can hold his breath!”

The problem would be if I was 85 and I had no more hair. I would find somebody to polish the top of my head.

What You Didn’t Know About Lynda Carter’s First Marriage