Zeshawn Ali’s documentary is a compelling portrait of a Black Muslim man in Newark who builds caskets and mentors two children. 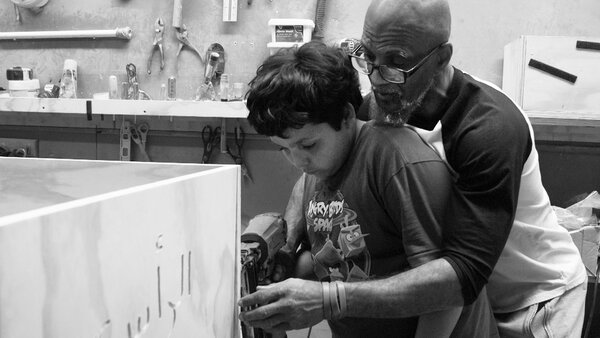 With depth of feeling and warm black-and-white photography, Zeshawn Ali’s humble documentary “Two Gods” fully acknowledges how death is a part of life.

Ali brings a matter-of-fact compassion to the experiences of three different people: Hanif, a Black Muslim man in Newark, and the two boys he is mentoring, Furquan and Naz.

Hanif builds caskets for a Muslim funeral home and joins their washing rituals for the dead. Lanky with a salt-and-pepper grizzle, heavy glasses, and a restless vibe, Hanif seems settled there after some years in the wilderness. He’s a pal to Furquan, a well-grounded 12-year-old, and a booster for Naz, a baby-faced 17-year-old who seems to be sliding into crime. Hanif worries over both — Furquan eventually moves in with relatives in North Carolina when his grandmother falls ill and mother deals with domestic abuse — while forging his own path and reconnecting with a son.

Ali nimbly sketches their shifting fortunes and feelings, sensitive to the contours of the Black and Muslim experience, whether showing the importance of community or the precarious sense of not getting second chances. He cuts efficiently without turning anyone into a case study. The most touching moment might be when Hanif goes through a rough patch and gets the space to say that he just doesn’t know how to respond — he’s hurting and figuring it out. Furquan is also portrayed with respect, as he finds new pursuits in wrestling and churchgoing.

A birthday cake gets cut at the beginning and ending of the movie. That celebratory image helps situate Hanif, Furquan and Naz’s lives in a hopeful cycle, working on healing, redemption and just plain living.

PODCAST INDUSTRY REPORT: Podcasting will be a $1 billion industry by 2021 — here's how Spotify, Apple, and others are innovating to make it happen and where brands fit in