Mr. and Mrs. Weissman each scored a nomination Tuesday 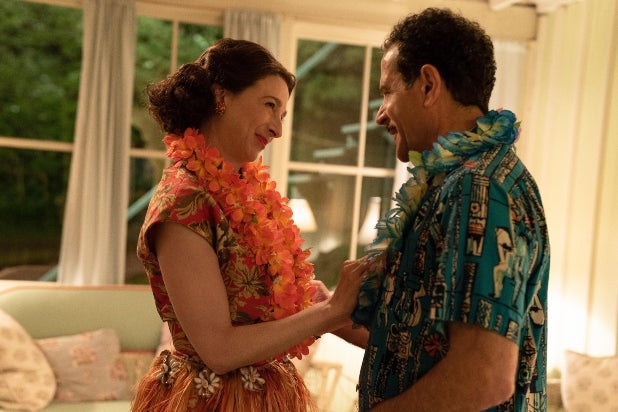 As she chatted Tuesday about her first Emmy nomination, Marin Hinkle couldn’t have been more in sync with Rose Weissman, her character on “The Marvelous Mrs. Maisel”: She was riding a bike on Martha’s Vineyard, on her way to catch a ferry, but don’t worry — she had her helmet on. Rose would have approved.

“There is that scene in Season 2 when she’s trying to introduce them, and she’s pushing Benjamin, and she goes on and on and on as they’re biking together. I feel like Rose on the bike!” she said of the moment in the Catskills when Rose plays matchmaker for her daughter Midge and the charming, single doctor, Benjamin (Zachary Levi).

At the same time, her co-star and on-screen husband, Tony Shalhoub, was trying to wrap his head around the fact that this year marks his tenth Emmy nod.

His reaction, delivered in the most endearing, Tony-Shalhoub-fashion, was to chuckle out a very jolly, “Oh my GOD! When you say it like that!”

Yet he would take none of the credit.

Shalhoub also insisted that he’d been “sworn to secrecy” about Season 3, but he did offer a glimpse as to what elements excite him the most, particularly in relation to his on-screen daughter Midge (Rachel Brosnahan) and wife Rose (Hinkle).

“Season 3 builds so beautifully on where we left off in Season 2. All of Midge’s changes that she’s going through, all of the choices that she’s making, are having a sort of a broad sweeping impact on all of the rest of us — certainly on Rose and on Abe, and their lives and their relationship to each other,” he said. “Everything is in a state of upheaval now. Even Susie’s life takes a little bit of twist to that, and Joel’s path veers off in another direction. So the impact of her choices — there’s that ripple effect, and we’re all kind of heading into uncharted territory.”

But for Hinkle, the gravity of her first nomination was anything but lost on her.

“Honestly, I never even let myself think about this as a possibility. I feel so lucky and grateful that I have a job as a woman of a certain age, so that’s kind of all you care about,” Hinkle said. “I spent a period of time not working because there was some stuff going on personally in my life, and that gave me even more understanding of how difficult it was to maintain a career as an actor, particularly a woman.”

On the whole, she was overcome with giddy surprise.

“This is just baffling,” she said. “I once won a bingo game and I got a shoeshine kit, but this is definitely different.”