This feature-length expansion of the popular cartoon is too brainless for adults, but its kid-friendly title characters are barely supporting players. 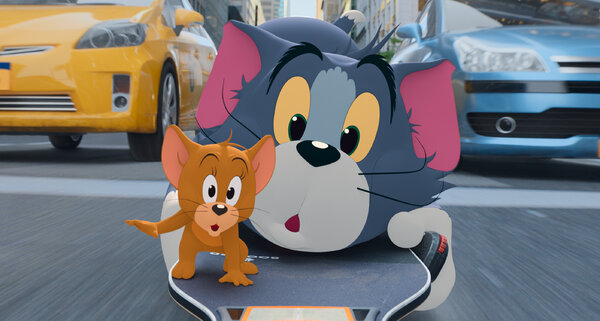 Affectionate nostalgia can attach itself to the most inexplicable and undeserving of recipients, which is about the only explanation for the existence of “Tom & Jerry,” a new feature-length expansion of the cartoon shorts of the 1940s and 1950s (and endless television rebroadcasts thereafter). Those were simple, slapstick cat-and-mouse chase comedies; here, the characters are uneasily blended, “Who Framed Roger Rabbit”-style, into a live-action New York City, where a quick-thinking hustler (Chloë Grace Moretz) bluffs her way into a job at a swank hotel in the midst of preparations for a high-society wedding. Tom and Jerry are also guests at the property, albeit uninvited ones. Shenanigans ensue.

The director Tim Story (of “Barbershop” and the execrable 2019 “Shaft” reboot) and the screenwriter Kevin Costello, reimagine Tom as a shades-wearing street musician, throw in jokes referencing Drake, T.I. and TikTok, and fill the soundtrack with classic hip-hop. It’s all flop sweat, a sad, desperate attempt to make Tom and Jerry the one thing they never were: cool.

They also weren’t crass, which creates some tension with the demands of a contemporary “family” comedy; the picture’s low point finds an animated bulldog squatting and defecating in the middle of a crosswalk, prompting the co-star Michael Peña (poor, poor Michael Peña) to shriek, “How many burritos did you eat?” The de rigueur slapstick scenes for the title characters don’t even play, as the integration of animation and live action is so clunky that it feels like we’re watching special effects demonstrations rather than gags.

Some of the performances are enjoyable. Moretz is charmingly game, Peña is funny because Peña is always funny and Rob Delaney has fun with his role as the hotel’s fussy manager. But the laughs they generate have little to do with Tom or Jerry; they’re borne of the personas and charisma of the cast.

There is some value to “Tom & Jerry,” though, in that it lays bare the unacknowledged truth at the center of the entertainment industry’s undying fealty to existing intellectual property. Put simply: Just because it was on television when you were a kid, doesn’t mean it was good.

Tom & Jerry: The Movie
Rated PG. Running time: 1 hour 41 minutes. In theaters and on HBO Max. Please consult the guidelines outlined by the Centers for Disease Control and Prevention before watching movies inside theaters.