The third and final movie in Netflix’s beloved To All the Boys I’ve Loved Before trilogy, To All the Boys: Always and Forever, is less than one day away from premiering, and stars Lana Condor and Noah Centineo aren’t ready to say goodbye just yet to Lara Jean and Peter.

“I’m in deep denial,” Condor confessed to ET’s Rachel Smith over Zoom in late January on reaching the end of the To All the Boys journey. “I was such a wreck when we had wrapped in Korea; we shot the Korea portion of it at the very end of [the movie]. I was such a wreck! I truly do not… I can’t, I don’t, I think when it’s finally out on Netflix it’ll sink in but I’m not ready.”

In Always and Forever, based on Jenny Han’s novel Always and Forever, Lara Jean, Lara Jean and Peter prepare for the next chapter of their lives: college. Now high school seniors, the couple discover they have different priorities when it comes to their vision for their futures, both collectively and individually. Two life-changing trips — one to Korea and the other to New York City — lead Lara Jean to reimagine what life with her family, friends, and Peter will look like after graduation.

Centineo wrapped Always and Forever before Condor and her co-stars Janel Parrish and Anna Cathcart made the trip to Korea. As Condor recalled, she was in “denial” that “whole entire day” he was filming his final scenes for the movie. 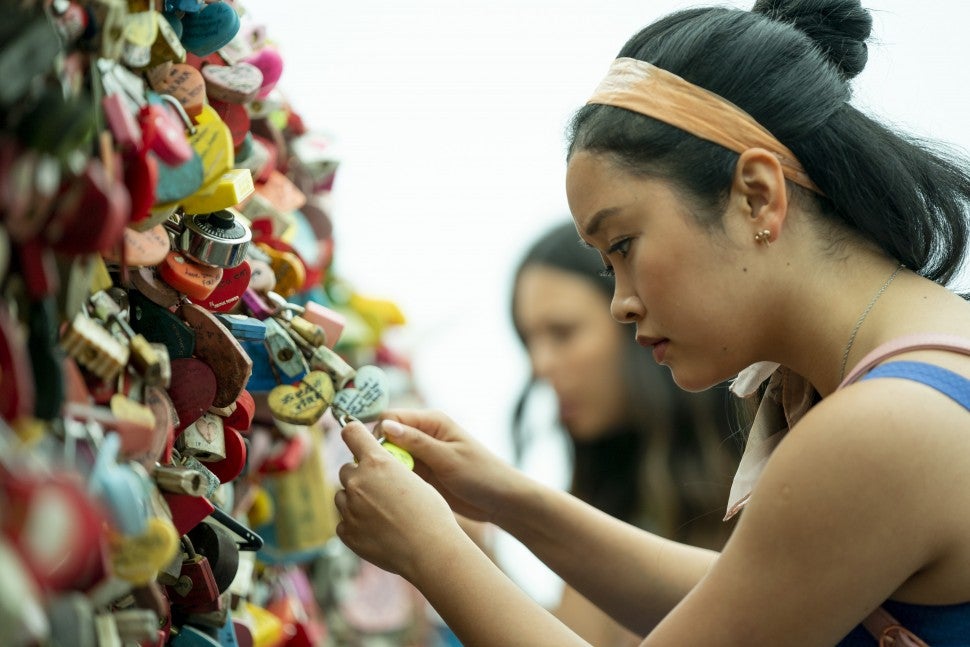 “I kind of just avoided him throughout the day,” the 23-year-old actress said. “Like, I didn’t want to look at him. I didn’t want to talk to him. I was like, ‘No, this isn’t happening,’ and that was pretty rough. I just feel very grateful for everyone on the cast and I feel very grateful that I got to work with Noah because I think our relationship really stood the test of time in these movies. I really enjoy him as a scene partner and as a person, so saying goodbye to him knowing that we were going to keep going, but that was his last day, really, really sucked.”

“Then, I thought that of course I was going to see him for press and everything, but since the global pandemic, there isn’t really that closure,” Condor noted.

Condor and Centineo credited the “no dating” pact they made at the start of the To All the Boys trilogy, saying it played a large part in keeping the movies pure and true.

Lana Condor on How ‘To All The Boys 3’ Ends and a Possible Real-Life Engagement!

Lana Condor on How ‘To All The Boys 3’ Ends and a Possible Real-Life Engagement!

“We love each other in a very friendship way and there’s real love there, but I think in an alternate universe — I can’t even imagine — if we would’ve dated, it would’ve ruined the movies,” Condor, who has been in a long-term relationship with Anthony De La Torre since 2015, said matter-of-factly. “You watch movies like Twilight where the leads [Kristen Stewart and Robert Pattinson] were dating and broke up in the middle of the films and I could not even imagine working in a romantic setting with an ex. That sounds like an actual nightmare. It’s a literal miracle that all of us still feel so much love towards each other because when you spend that much time with each other and your whole worlds are changing together a lot could happen.”

“This is going on four years of working together and so you don’t really get to have a friendship with someone if lust gets in the way,” added Centineo, 24. “And who knows, things can get ugly at some points.”

“At the end of the day, it is a job. This is a profession and it’s important to have a high level of professionalism when going to work,” he continued. “I think beyond that it was very natural for Lana and I to settle into a place of friendship. We’ve had each other’s back from the very first day that we met… And the way that our lives timed out, we were going through similar things in relationships in our lives so from Day 1, that’s how it’s been.”

Condor has spoken glowingly about her beau, de la Torre, and the romantic gestures he’s made over the years. And no, she insists he doesn’t need to take a page out of Peter Kavinsky’s romance playbook.

“He is so romantic and he’s much better at it than I am, to be completely honest, and oftentimes I’m like I should learn from Lara Jean,” she quipped. “Like, I should step up my game a little! But I think Anthony is even more so than Peter. But also Anthony’s a lot older than him so he has that age experience, that life experience.”

“I think Peter’s a really solid target for how to deal with things but I don’t think he’s the by any means the perfect boyfriend,” Centineo said. “He’s got a lot of growth to do as well. He could be better. He was definitely a solid target and by my own marker for partners, but I don’t really feel a lot of pressure. I think, for me, relationships are always sacred. You’re always supposed to worship the person one way or another.”

To All the Boys: Always and Forever drops Friday, Feb. 12 on Netflix. For more on the franchise, watch below.

Lana Condor on 'To All The Boys 2' Secrets and Noah Centineo Rumors! | Full Interview

To stay up to date on breaking news, sign up for ET’s daily newsletter.