Network procedurals once again ruled 2020 across the linear TV networks.

Nielsen released its top TV programs of the year on Monday and the most watched regularly scheduled shows included NBC's "Chicago" franchise along with CBS's "NCIS" and "FBI."

Usual suspects like "This Is Us" and "Young Sheldon" also made the top 10, but law-enforcement shows still dominated in a year where police-focused TV drew scrutiny amid nationwide protests against police violence following the death of George Floyd.

The NBC comedy "Brooklyn 99," for instance, faced pressure to confront police violence in its next season. Star Andy Samberg said that the series will explore the issue in future storylines.

Police-oriented shows are often the most popular programs on TV, but a study by the nonprofit advocacy organization Color of Change this year found that these shows can normalize wrongful actions by their protagonists, such as racism or abuse of power.

Overall, Nielsen's year-end list is similar to its top shows of the 2019-2020 TV season it released in May, with the top four exactly the same but "This Is Us" falling a tad.

We rounded up the list, but only included scripted programs (so we excluded Thursday and Sunday Night Football).

Below are the top eight shows of 2020, according to Nielsen ratings: 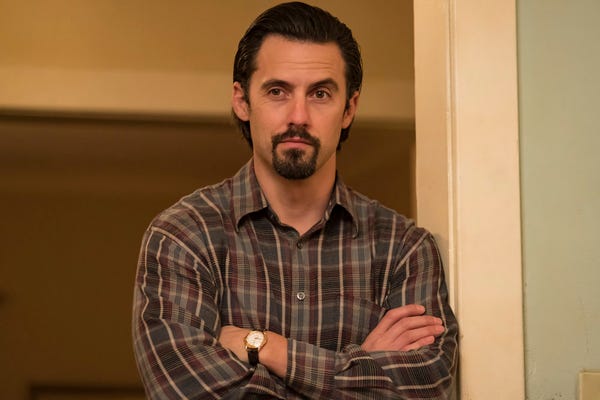 Description: "Everyone has a family. And every family has a story.  'This Is Us' chronicles the Pearson family across the decades: from Jack (Milo Ventimiglia) and Rebecca (Mandy Moore) as young parents in the 1980s to their 37-year-old kids, Kevin (Justin Hartley), Kate (Chrissy Metz) and Randall (Sterling K. Brown) searching for love and fulfillment in the present day." 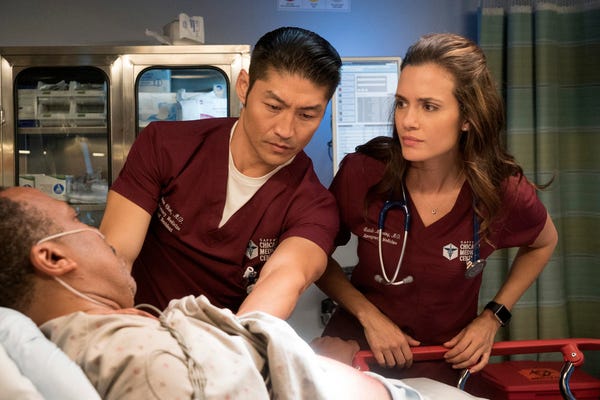 Description: "'Chicago Med' is an emotional thrill ride through the day-to-day chaos of the city's newest state-of-the-art trauma center and into the lives of the courageous doctors, nurses and staff who hold it all together." 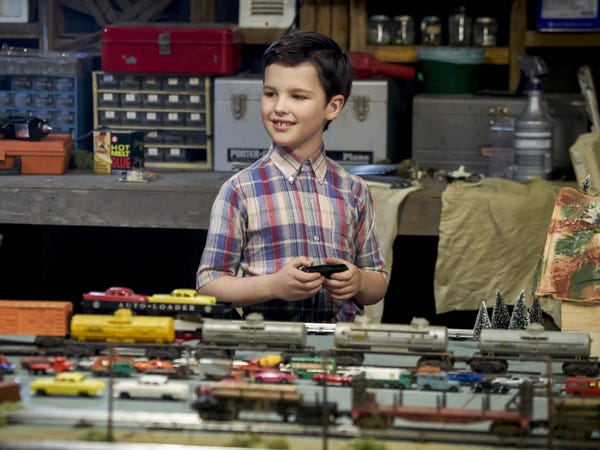 Description: "For young Sheldon Cooper, it isn't easy growing up in East Texas. Being a once-in-a-generation mind capable of advanced mathematics and science isn't always helpful in a land where church and football are king. And while the vulnerable, gifted and somewhat naïve Sheldon deals with the world, his very normal family must find a way to deal with him." 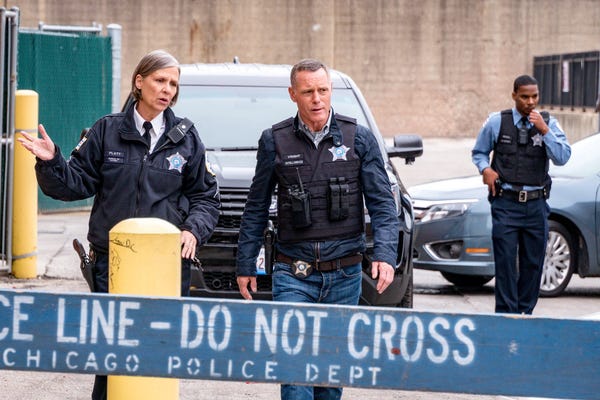 Description: "From multiple Emmy Award-winning executive producer Dick Wolf and the team behind the hit series 'Chicago Fire,' 'Chicago P.D.' is a riveting police drama about the men and women of the Chicago Police Department's elite Intelligence Unit, combatting the city's most heinous offenses – organized crime, drug trafficking, high-profile murders and beyond. At the center of "Chicago P.D." is Det. Sgt. Hank Voight (Jason Beghe), who is at ground zero against the war on crime in Chicago. He will do anything to bring criminals to justice." 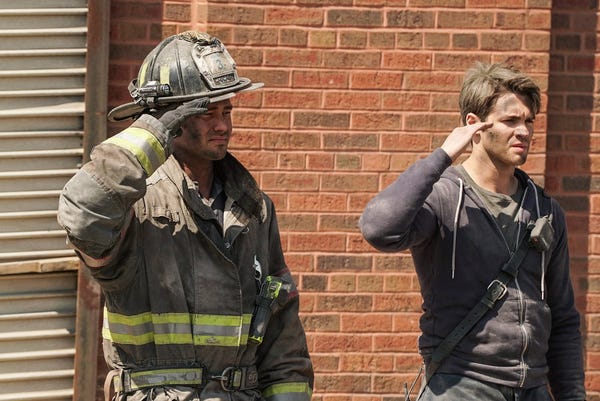 Description: "The firefighters, rescue squad and paramedics of Chicago Firehouse 51 risk their lives week in and week out to save and protect the citizens of their incredible city. The family inside Firehouse 51 knows no other way than to lay it all on the line for each other. Capt. Matthew Casey (Jesse Spencer) leads the Truck Company and brash Lt. Kelly Severide (Taylor Kinney) runs the Rescue Squad." 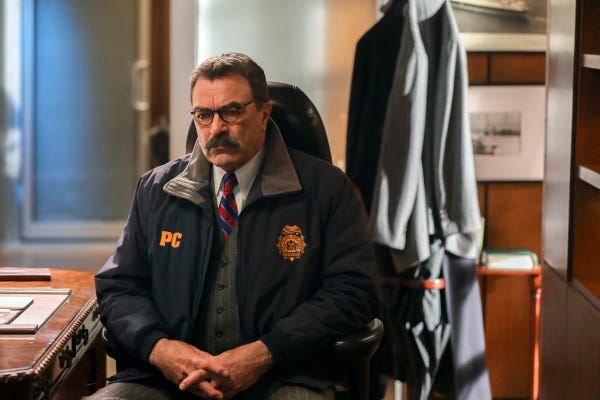 Description: "'Blue Bloods' is a drama about a multi-generational family of cops dedicated to New York City law enforcement. Frank Reagan is the New York Police Commissioner, and heads both the police force and the Reagan brood. He runs his department as diplomatically as he runs his family, even when dealing with the politics that plagued his unapologetically bold father, Henry, during his stint as Chief. A source of pride and concern for Frank is his eldest son, Danny, a seasoned detective, family man and Iraq War vet who on occasion uses dubious tactics to solve cases with his partner, Detective Maria Baez." 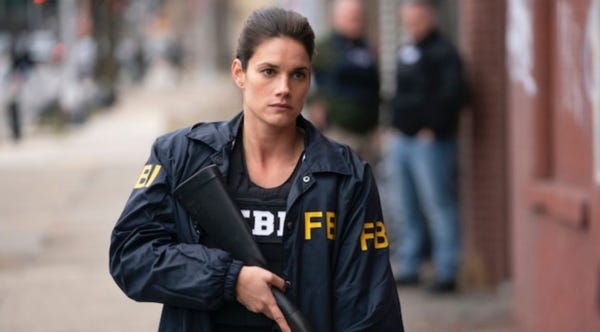 Description: "From Emmy Award winner Dick Wolf and the team behind the 'Law & Order' franchise, 'FBI' is a fast-paced drama about the inner workings of the New York office of the Federal Bureau of Investigation. This elite unit brings to bear all their talents, intellect and technical expertise on major cases in order to keep New York and the country safe." 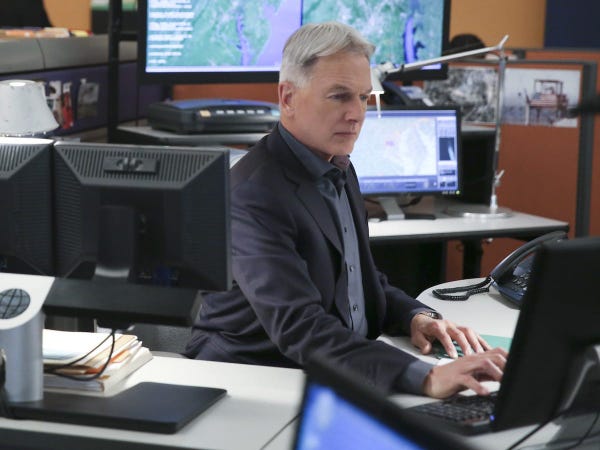 Description: "'NCIS' (Naval Criminal Investigative Service) is more than just an action drama. With liberal doses of humor, it's a show that focuses on the sometimes complex and always amusing dynamics of a team forced to work together in high-stress situations. NCIS Special Agent Leroy Jethro Gibbs, a former Marine gunnery sergeant whose skills as an investigator are unmatched, leads this troupe of colorful personalities."