When Laura Dern, Sam Neill and Jeff Goldblum reprised their roles for the new sequel, they quickly refound the chemistry they had in the 1993 blockbuster.

Jeff Goldblum hopped on the video call from his home in Los Angeles. Sam Neill connected from Sydney, where the brightly colored lorikeets outside were chirping. And Laura Dern, who was away filming the Netflix romance “Lonely Planet,” dialed in from Morocco with a story for them both: “I was walking down this narrow street in a market in the middle of Marrakesh to go into our set,” she said, “and this 9-year-old boy comes running up in Arabic talking about ‘Jurassic Park.’”

Though nearly three decades have passed since the trio starred in Steven Spielberg’s 1993 dinosaur epic, that series-starter still manages to resonate in impressive ways. Now, five sequels later, the new “Jurassic World Dominion,” directed by Colin Trevorrow, has brought the three actors back together in a bid to recapture the original’s magic. It pits Neill’s Alan Grant, Dern’s Ellie Sattler and Goldblum’s smoothie mathematician Ian Malcolm against ever-more-fearsome dinosaurs and linking them up with characters played by Chris Pratt and Bryce Dallas Howard, who have been leading the franchise since 2015’s “Jurassic World.”

On their late-April Zoom call, Neil, Dern and Goldblum were eager to catch up, engage in some light teasing and ponder how their lasting chemistry as a trio has proved as potent a selling point as all those special effects. “These ‘Jurassic’ films, they’re often known as dinosaur films, but if you’re not interested in the people, the films don’t work,” Neill said. “Dinosaurs are the bit players, albeit awesome ones.”

Here are edited excerpts from our conversation. 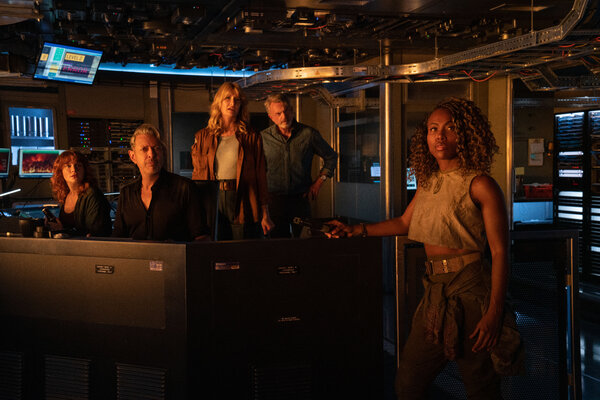 How long has it been since you’ve seen the original “Jurassic Park”?

SAM NEILL The last time I watched it in its totality was sitting beside Princess Di at Leicester Square at the London opening. On the other side of me was my son Tim — he was 11 and completely swept away by it, but about the time the T-Rex turns up, Tim started to fart. And the draft was drifting across me to royalty! I spent the whole film in a muck sweat, thinking, “Princess Di is being exposed to the horrors of a little boy’s fart, but she’s going to think it’s me. I am going to be subliminally blamed for my son’s crimes, and I don’t think she’ll talk to me afterwards.” But she was well brought up and never mentioned it.

JEFF GOLDBLUM I love that story, Sam. I’ve heard him tell that a couple of times, and it’s just amazing the lengths that he will go to still blame the boy.

Laura, had you stumbled across the first film in the intervening years?

DERN I really hadn’t seen it all the way through until three days before we went to start this movie. I watched it with my daughter, and it was amazing to see it through her eyes — there’s nothing dated about it. And also, no wonder the three of us became friends. To have that kind of banter and connection and friendship was so amazing.

Was that chemistry immediate when you all met for the first time?

NEILL I knew both of their work so well that it was like meeting old friends. What I wasn’t prepared for was when Jeff turned up, he was no longer that gawky kid from “Nashville” — he was a god. He was buffed, he was tan, he looked like a movie star, and he’d kind of adopted the character already. He had that swagger, you know? Black shades on, tight jeans, and those cool-dude hips.

GOLDBLUM Gee, I didn’t know you felt so strongly about me!

NEILL I found it kind of daunting, but the great thing about Jeff is he’s kind of a lovable dork as well. And so I fell in love with them both from day one.

How did your lives change when “Jurassic Park” became the highest-grossing movie ever made?

GOLDBLUM I’m not focused on the commerce of it all — I still consider myself a humble student of the creative endeavor — but I do remember that opening weekend was exciting. Sometimes I do big things that I think are conspicuous, and I’ll tell you, a week will go by, and it’s as if it never happened. I don’t get a single call. That often happens, you’d be surprised.

NEILL One day, Bruce Dern [Laura’s father] came around to my house to drop [her] off, and he took me aside and clapped me on the shoulder. He said, “Son, you know what? You’ve got a meal ticket for life here.” Now, maybe that’s right. I haven’t stopped working since.

DERN You hope that if a moment like this happens, your Richter scale doesn’t shift for how you measure what you want to do. I remember Jeff read a script and said, “This is what you should do after ‘Jurassic Park,’” and it was ‘Citizen Ruth.’ I could have gone back and done, like, the girl in the action movie, but it takes an amazing artist to say, “Don’t do the obvious thing. Do what you love, and be bold.”

GOLDBLUM Over the decades, it’s changed my life considerably. I’m a different person than I ever would’ve been for having worked on that first movie and with these guys specifically — I’m much, much enhanced. And all the people I anecdotally come across that have been moved, touched, delighted, entertained, and are excited about all things “Jurassic” — that’s a big deal.

And that excitement can be expressed in creative ways. I have two gay friends who’ve dressed as Ellie Sattler for Halloween, with the tied pink shirt and khaki shorts.

DERN It makes me really happy someone else is wearing the shorts, because it should be shared joy.

NEILL The first time I ever saw someone else dressed as Alan Grant, it was Melissa Etheridge. What’s more, I’ve been to two fan events, and at one point I counted no less than ten Alan Grants among the throng of fans, eight of whom were women.

DERN It’s something to aspire to, let’s be clear.

The three of you continued to appear in separate “Jurassic” movies in the meantime, but you had never acted together as a full-blown trio until now. When was that notion advanced?

GOLDBLUM I shot a commercial for the Super Bowl with Colin Trevorrow, which was the first time I ever met him. We were at the craft-services table, and he said, “Be prepared: We’re going to shoot another one of these ‘World’ movies, and I think we’re going to ask you to do something in it with Sam and Laura.” It was like that scene in “The Exorcist,” when somebody comes up to Max von Sydow and gives him a note that says, “You’ve been summoned to do another exorcism.”

NEILL But it nearly didn’t happen. Almost as soon as I landed in London, it became apparent that a pandemic had started. Suddenly the plugs were pulled, the “Jurassic” office put me on a plane right back to Australia, and the curtain came down. For all we knew, the world was going to die. It was a very dramatic start. Three months later, the call came: “We are going to attempt this thing.” There were alarms and stoppages and moments of terror, but we got through it.

DERN I felt very safe for only one reason, which is the only other time in my life I was in what felt like a deep, natural disaster in lockdown, it was with these two men and Steven Spielberg on the first “Jurassic Park.”

Because Hurricane Iniki hit while you were shooting in Hawaii, right?

DERN Yeah. It was pretty terrifying. I think it’s why we all feel so much like a family from that film, because we went through something so massive, and then here we were again in lockdown! You may call it a warning sign, but instead I call it a good luck symbol. There is something amazingly bonding about surviving together.

Did you have a lot of input into how your characters might have evolved in the years since you last played them?

DERN I’ve had the luxury of spending these 20-some odd years with young women coming up to me and talking about how they went into science or tech or marine biology and myriad other professions because of Ellie Sattler. It’s just amazing that the character meant so much, so to me, there was no sense in bringing her back unless there’d been an evolution. Luckily, Colin loved the idea that she would have naturally evolved into dealing with the climate crisis in her awareness of paleobotany and soil science and DNA.

NEILL There’s a slight case of arrested development with Alan. He’s older and grumpier, but he just wants to do what he’s always done, which is dig bones. But he’s always carried a torch for Ellie Sattler, and the great regret in his life is that he let her go, so when she turns up, that puts a little spring on the step. And then Ian turns up, and [Alan] has this love-hate relationship with Ian because he’s a ladies’ man, and Ian can’t help flirting with Ellie. This stuff drives Alan crazy. Ian is just smooth and debonair, and he’s still got those groovy hips.

Another reference to Jeff’s hips. They must have left a big impression on you.

NEILL It’s early morning here in Sydney, Australia, so I’m about to go for a walk, but I’m so pleased to see my pals. Love you both. And Laura, Netflix must be so happy to have you back. You are the only actor that’s won an Oscar for Netflix [for “Marriage Story”]. Am I right?

NEILL God bless you. I hope they’re paying you a gazillion, they should be.

DERN That is actually my salary. It’s a gazillion — it says that on the contract.

The Goonies' Original Cast Members Are Reuniting for a Virtual Special