Any discussion about classic romantic movies is bound to includea few predictable titles. Casablanca, Sleepless in Seattle, WhenHarry Met Sally, Titanic, Gone With the Wind, Pretty Woman…it’s a familiar list of favorites. But one of the most beloved of all these is TheNotebook.

The movie recently celebrated its15thanniversary which is hard to believe—even 15 years later, it’s still sorelevant and relatable. If you still swoon every time Noah recites his speechto Allie and you can’t get over the fact that Ryan Gosling and Rachel McAdamsbroke up in real life, then read on to discover the craziestthings you never knew about The Notebook.

…you are and have always been my dream #TheNotebook #loveisinthehair ??

Everyone knows how the movie ends— a nurse discovers that elderly Noah and Allie have died in each other’s armsovernight. But if you happen to be watchingthe movie on Netflix, you’ll see the movie fade to black right before thatscene and just abruptly end.

‘The Notebook’ is based on a truestory

Remember that The Notebook film is based on the Nicholas Sparks book by the same name. And though Sparks is a creative man, he didn’t just make up the characters of Noah and Allie — he used his ex-wife’s grandparents as inspiration. Their real-life love story is very similar to the one you see in the movie.

Rachel McAdam was meant to play the role

When that certain someone only has eyes for you…?#ThatIsLove #Soulmates #Romance #TheNotebook #Noah #Allie tag that special someone today and share some early Valentines Day LOVE ❤️…If you don't have a Valentine this year…tag yourself & your friends because let's face it: YOU are amazing and you should always love yourself first anyway??? XoX

Competition for the role of Allie was fierce. A-listers including Reese Witherspoon, Jessica Biel, and even Britney Spears were all potentials for the part. But after Rachel McAdams received the script and “sobbed uncontrollably,” she knew she had to be the one.

She read the script the nightbefore and only had a few hours to prepare for the audition. But she stillnailed it and got the role.

The director didn’t want ‘TheNotebook’ to be too sexy 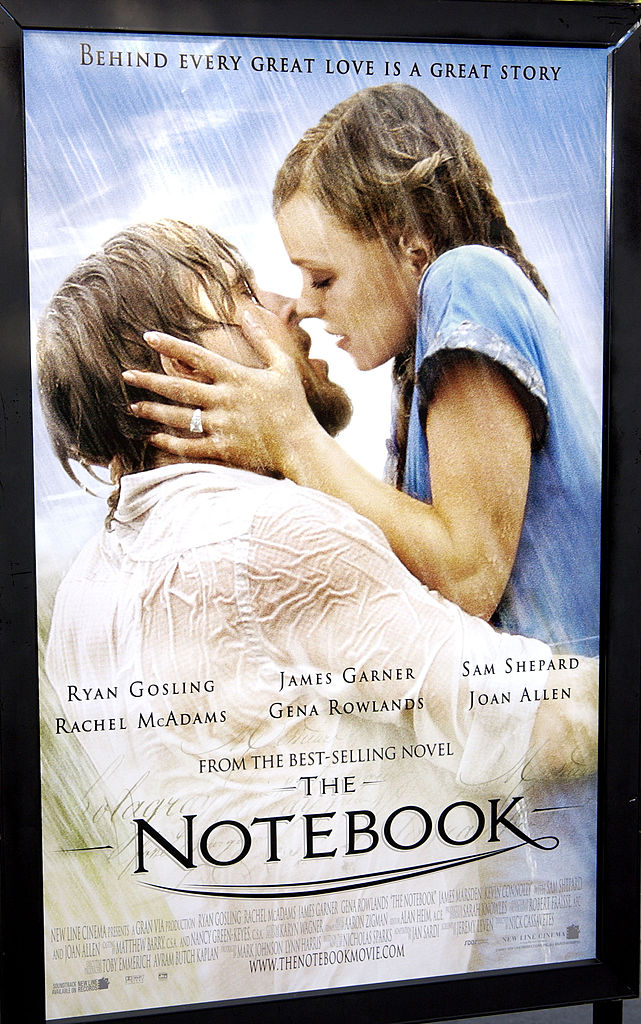 Director Nick Cassavetes admittedthat sexual innuendo embarrasses him, so he kept it out of his movie. Plus, he wantedto appeal to a larger audience, so he decided to skip overt sex scenes.

Author Nicholas Sparks hadsimilar thoughts about the bookversion. “I think that readers also appreciate that the noveldidn’t include foul language and its love scene was tasteful and mild comparedto what’s found in many other novels,” he said. “These factors made people feelcomfortable about recommending it to others.”

Ryan Gosling was cast because he ‘wasn’t handsome’

Millions of women woulddisagree with this assessment, but the reason Ryan Gosling got cast as Noahwas because of his unconventional good looks. Director Nick Cassavetes said, “I want you to play this role because you’re notlike the other young actors out there in Hollywood. You’re not handsome, you’renot cool, you’re just a regular guy who looks a bit nuts.”

The movie was filmed backwards

The older scenes of RachelMcAdams and Ryan Gosling were filmed first, then the two transformed themselvesto look younger for the beginning scenes. Gosling had to shed 20 pounds overChristmas and shave his beard.

Also, he wore brown coloredcontacts so his eyes would match the actor who played the older version of Noah(Gosling’s eyes are actually blue).

Ryan Gosling and Rachel McAdams didn’t get along

"You and I were different. We came from different worlds and yet you were the one who taught me the value of love" – The Notebook Ps. THANK YOU Notebook fans for allowing us to reach +6000 followers #keep #spreading #love #muchlove and #blessing to all! ❤ #romance #love #couple #soulmates #kissing in the #rain ???

They may have had convincing chemistry on-screen, butGosling and McAdams weren’t exactly getting along when cameras stopped rolling.“We went into a room with a producer; theystarted screaming and yelling at each other. I walked out. [Then] everybodycame out like, ‘All right let’s do this.’ And it got better after that,” Cassavetessaid.

You know the part when Noahconfronts Allie and delivers the emotional, “What do you want! What do you want?” Thatwasn’t actually in the script. Ryan Gosling was so into what he was saying thathe ad-libbed the line. Obviously, it worked.

Days of our Lives spoilers for next week: Lani is suspicious, Eve lies again, and Stabi schemes together