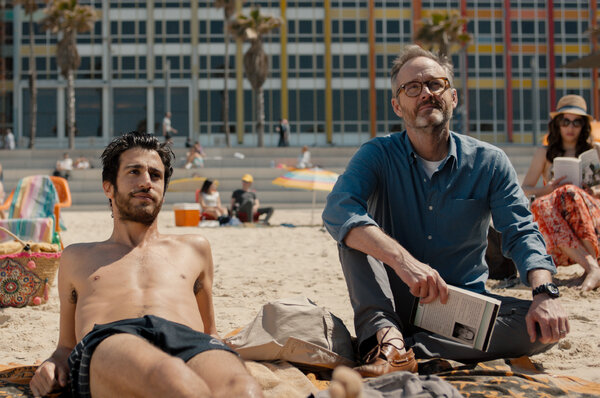 An understated gay romance, “Sublet” follows a fictional middle-aged New York Times travel writer assigned to discover what’s what in Tel Aviv over the course of five days. Michael (played by John Benjamin Hickey with guarded propriety and bristling vulnerability) seems at odds with the city’s madcap energy. When he arrives at his temporary abode in a particularly hip part of town, he’s caught off guard by Tomer (Niv Nissim), his chaotically free-spirited “landlord,” who rents his home out to tourists for extra cash.

The film doesn’t exactly subvert its clichéd “when two worlds meet” premise, and its bubbly but lame music cues are no help. The Israeli director Eytan Fox offers insights into two generations of gay men that at times can seem superficial. Nevertheless, he creates a pleasurably low-key double character study.

With Tomer as his guide, the stiff, bespectacled Michael, who is quietly reeling from a personal loss, sees the “real” Tel Aviv — that is, the Tel Aviv of a bohemian 20-something who has never been persecuted for his sexual orientation. The two enjoy local restaurants, see an avant-garde dance performance and visit a disco, though Michael calls it a night when Tomer offers him MDMA.

Fox’s critique runs both ways. Tomer is a broke, commitment-phobic wild child, while Michael, insulated by his privilege and shaped by the AIDS epidemic, comes off as woefully out of touch, when, for example, he attempts to weigh in on the Israeli government’s efforts to silence artists.

At the same time, the film is never interested in political proselytizing; neither does it depict a life-upending love story. Though far from the gold standard of “brief encounter” dramas like Andrew Haigh’s “Weekend,” “Sublet” nevertheless wins you over with its subtle charm and its mellow depiction of two men forging an unexpected connection.

Hazards of nature: a bog frog in the throat and a man-eating camera thief