An alienated teenager finds questionable companionship in this playful coming-of-age romance by Suzanne Lindon, who was in her teens when she wrote, directed and starred in the film. 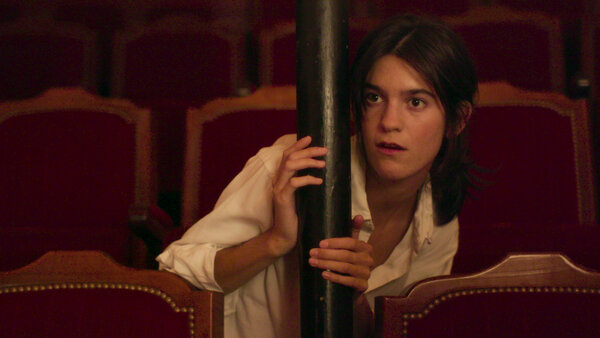 In the opening scene of “Spring Blossom,” a teenage brunette with downcast eyes spaces out as her peers prattle on around her. Suzanne (Suzanne Lindon) is not interested in what her fellow students have to say, yet her options for companionship are limited. In her humdrum existence — an endless back and forth from home to school flecked with the occasional unfulfilling party — it’s her fantasy life that sustains her.

That is, until she meets Raphaël (Arnaud Valois), a 35-year-old stage actor who puts a spring in her step.

Lindon wrote “Spring Blossom” at the age of 15 while attending high school in Paris and directed it at age 19. The movie owes a debt to naturalistic coming-of-age dramas by French directors like Maurice Pialat, but Lindon’s interpretation of that work occasionally feels like a pastiche. At the same time, she rejects the trope of the angsty teenager, capturing adolescent alienation with buoyancy and subtle whimsy.

Raphaël, himself bored by his actorly milieu and constant rehearsals, falls for Suzanne as well, though their tender relationship remains chaste — and mostly wordless. Their feelings, potent as they are, are abstract: Lindon captures the odd couple’s connection by rendering their most intimate moments as synchronized dance numbers.

Crucially, Suzanne is not a hopeless romantic. She falls for the idea of adulthood that Raphaël embodies, and realizes rather abruptly — well before things get messy — the impossibility of their love. Lindon stages an intentional anticlimax that feels confusingly abrupt and unconvincing. Yet her point is well taken: that the desires of young people are as fickle and ephemeral as flowers in full bloom.

Spring Blossom
Not rated. In French, with subtitles. Running time: 1 hour 13 minutes. In theaters. Please consult the guidelines outlined by the Centers for Disease Control and Prevention before watching movies inside theaters.

This is how much Mary Elizabeth Winstead is worth