Zoey Deutsch shines in a story of an epic Christmas gift mix-up. 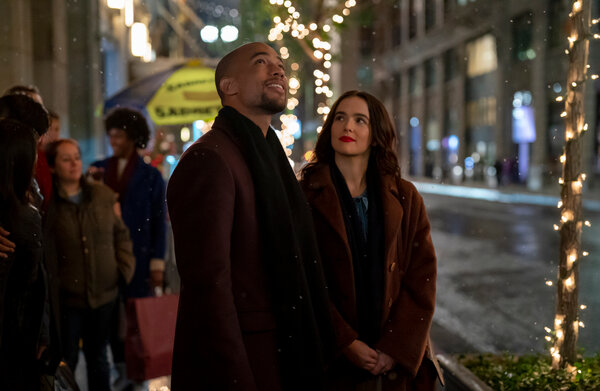 Romantic comedies rarely go wrong when they include some combination of mishaps, mistakes and mix-ups — all those fateful accidents that bring together strangers and glorify the wonder of cosmic serendipity. A really piquant imbroglio is rom-com gold: see “The Shop Around the Corner” (adversarial co-workers unwittingly strike up a romance by mail), “I Love You Again” (a husband on the verge of divorce gets amnesia and attempts to re-woo his own wife), “While You Were Sleeping” (a train fare collector is embroiled in family drama after being confused for a comatose commuter’s fiancée), or any number of other classics of the genre.

“Something from Tiffany’s” doesn’t quite have the Lubitsch touch. But it does boast a very charming premise, built around a truly ludicrous misunderstanding that I found impossible to resist. Gary (Ray Nicholson) buys his girlfriend, Rachel (Zoey Deutch), a pair of earrings for Christmas. Ethan (Kendrick Sampson) buys Vanessa (Shay Mitchell), his girlfriend, an engagement ring. After Gary is hit by a car outside Tiffany & Company, Ethan comes to his aid, and the two unknowingly swap gifts. When Rachel opens the ring on Christmas morning, she wrongly assumes that Gary is trying to propose to her. Gary doesn’t remember much about the night of the accident, so when he sees the ring, he thinks that maybe he is.

It’s a winning setup, and the director, Daryl Wein, escalates the action shrewdly, with clever rom-com engineering. Rachel and Ethan are thrown together as a result of the accident and the resulting confusion of gifts, and they quickly sense a mutual rapport that might be more than mere attraction. Deutch and Sampson have an abundance of screen chemistry, and Wein lets it simmer, holding on glances as it builds slowly to a last-act boil. With her wry grin and screwball banter, Deutch is especially delightful, bounding through the cavalcade of holiday mix-ups with the buoyant verve of a bona fide romantic lead.

Star Wars: The Rise of Skywalker review: 'A monumental disappointment'