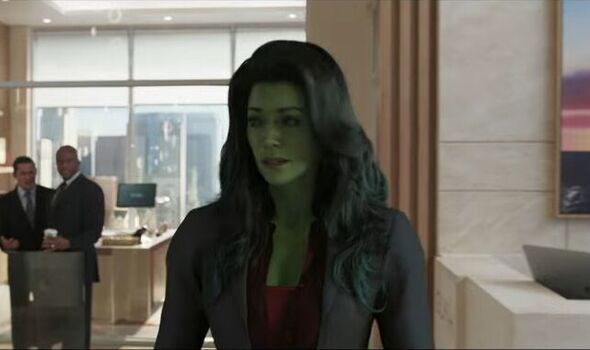 The trailer introduces us to Jennifer Walters, a high-flying lawyer who also happens to be the cousin of Bruce Banner – AKA gamma-powered superhero The Hulk.

Jennifer, played by Orphan Black star Tatiana Maslany, has just been drafted in to help her firm set up a new superhuman law division when an accident leaves her needing an emergency blood transfusion.

But of course, with this being a Marvel superhero adventure it’s no great surprise that with a dose of her cousin’s blood flowing through her veins Jennifer is transformed into a giant, green-skinned super-lawyer.

The transformation has had its critics though.

While Marvel are using the same basic CGI techniques that turned Mark Ruffallo into the jolly green giant, TV budgets are that little bit lower. And the fact that She-Hulk is a bit more “human” looking than other CGI characters such as Groot or The Abomination can leave her in “Uncanny Valley” territory.

It’s possible that more work will be done on the effects before the “Ally McBeal meets the Avengers” show reaches our screens too, but that hasn’t prevented a few fans from weighing in on their quality.

“The CGI in She Hulk is so off-putting…” wrote one on Twitter, while another disappointed Marvelite wrote “The CGI on She-Hulk makes her look like a sims character”

Some dismissively compared Maslany’s look to Princess Fiona from Shrek.

Others complained that it would have been better to hire a more physically imposing actress than 5’4” Maslany and cover her in green body-paint, in the same way Lou Ferrigno was made up in that original 1970s Hulk TV series.

There were a few critics, too of what they perceived as “woke” dialogue. When Bruce tells Jennifer to focus on anger and fear in order to trigger her transformation, she quips that’s “like the baseline for any woman just existing!”

But plenty more praised the realism of Maslany’s character.

Overall, fan reaction has been solid, with plenty of people praising Maslany’s star power and enjoying the playful banter between her and Ruffalo.

The cast of the nine-episode series also includes Jameela Jamil as She Hulk’s enemy Titania, and sees the return of Tim Roth as The Abomination.

The show is set to drop August 17 on Disney+.

Dear Evan Hansen trailer: Ben Platt – ‘I was nervous about returning to the role’