Scooby-Doo has been around for over 50 years in animated series, movies and live-action movies. Those of you who were online in the early ’00s may remember the kerfuffle over the first live-action movie with its A-list stars and CGI Scooby. Despite the haters, that movie was a hit and got a sequel. Scooby-Doo was set to return to the big screen in the all animated Scoob! but instead it premiered on streaming VOD so that families stuck at home during the coronavirus (COVID-19) pandemic can watch it. 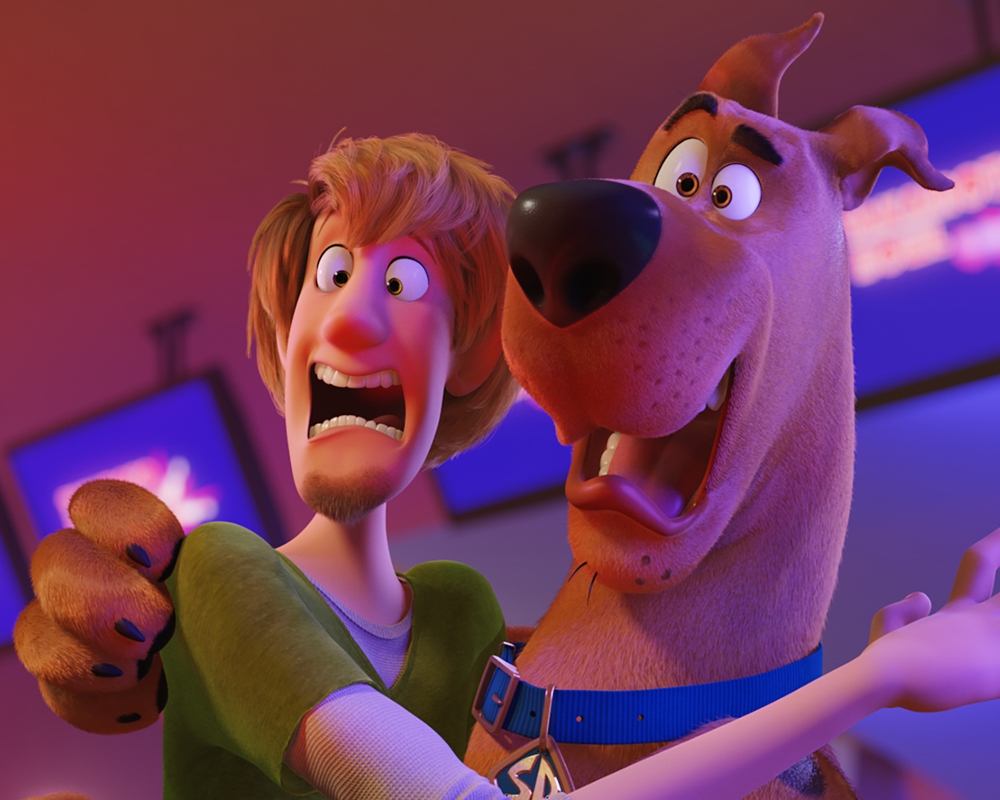 The voice cast of Scoob! is even more A-list than the 2002 movie’s cast. That movie may have struggled to make a CGI dog feel substantial in live-action scenes. By making the entire world computer animated, Scoob! has more toys to play with, though sometimes that makes it feel like it’s not really Scooby-Doo anymore.

As adults, Scooby (Frank Welker), Shaggy (Will Forte), Fred (Zac Efron), Daphne (Amanda Seyfried) and Velma (Gina Rodriguez) operate Mystery, Inc. They met as kids. First, Shaggy found Scooby on the beach and came up with his name. He just accepts that a dog can talk. That’s not the major revelation of that relationship. 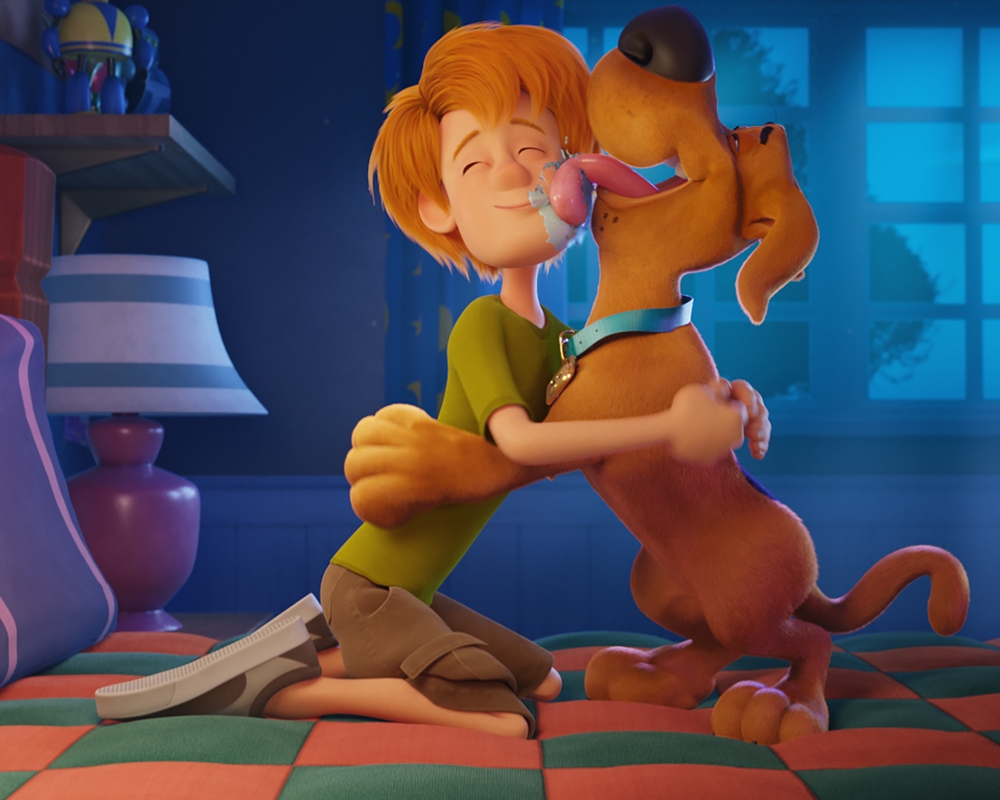 Fred, Daphne and Velma help Shaggy and Scooby when some bullies throw their Halloween candy into the haunted Rigby house. The gang solve their first fake haunting crime, complete with the foiled villain’s frustrated line. In the present, Fred, Daphne and Velma want to grow the Mystery Inc. business but Scooby and Shaggy are only interested in goofing off.

Scooby and Shaggy can’t get out of it that easily. The Blue Falcon (Mark Wahlberg) and Dee Dee (Kiersey Clemons) rescue them from some of Dick Dastardly (Jason Isaacs) creations. With the help of Dynomutt (Ken Jeong), they have to stop Dastardly’s evil plot and reunite with the gang.

Scoob! incorporates other characters from the Scooby-Doo universe. Other Hanna-Barbara characters appear too, and sharp-eyed viewers will catch Easter eggs for even more. Don’t worry, there’s no Scrappy this time. There’s also synergy with other Warner Brothers properties like A Star is Born and Wonder Woman.

That makes Scoob! Bigger, but it kind of becomes a Falcon and Dinomutt movie. They may have more screentime than the Scooby gang. Scooby and Shaggy are trapped in a superhero movie with Falcon and Dynmoutt vs. all of Dastardly’s mechanical creatures. That’s not really the kind of supernatural mystery the Scooby gang is supposed to solve. 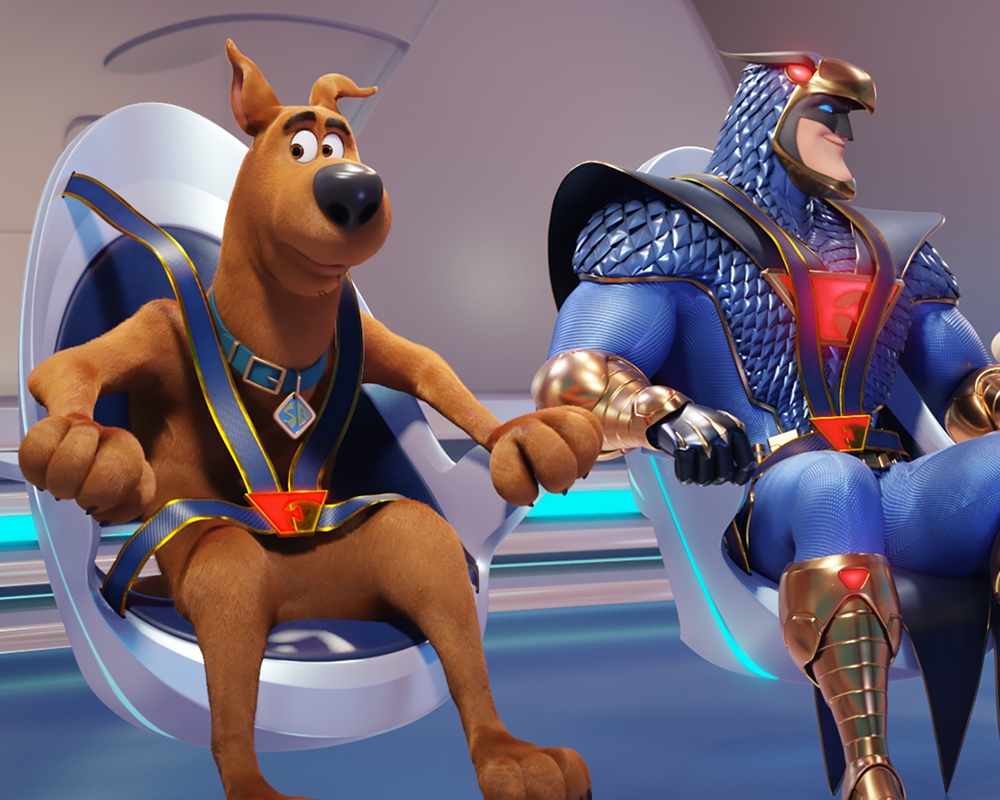 If the twist is “the Scooby gang in a Marvel movie,” it’s fun. Warner Brothers would surely prefer the comparison be a DC movie, but the Dastardly plot is much more akin to the sorts of things the Avengers face.

One major change in Scooby-Doo is that he speaks more clearly in complete sentences now. He still has a speech impediment. He still says “Ruh-roh,” but he uses nouns and verbs too now. Usually what he’s saying is really sweet to Shaggy. Their friendship remains the emotional core of the film. It’s an odd choice though since 50 years of Scooby-Doo never had issues with his broken English.

If it’s going to be a CGI Scooby-Doo, at least Scoob! does all the trappings. This movie has robots, spaceships, laser bugs and all sorts of wild designs. It has beautiful colors with an emphasis on glowing greens, purples and gold. They visit a multicolored realm at one point in the adventure.

Scoob! is fun and ambitious. At its best, the gang is being true to themselves and complementing each other with their idiosyncrasies. At its worst, it gets a bit muddled in plot and supporting characters, but that’s not enough to ruin a fun night at home with the family.