A real-life case of infanticide is the basis of Alice Diop’s rigorous and wrenching courtroom drama. 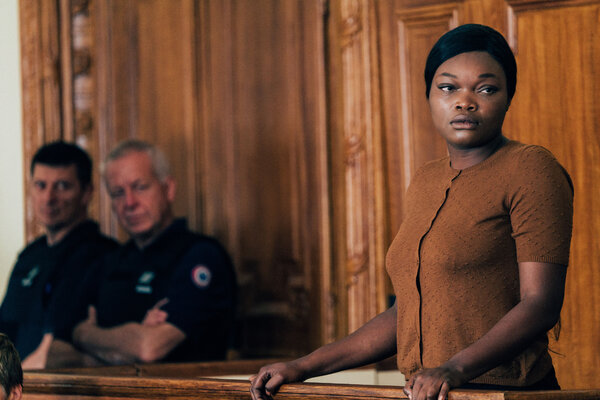 In 2016, Fabienne Kabou appeared in a provincial French court, charged with killing her daughter, who was a little more than a year old. Diop, who attended Kabou’s trial, has turned the case and her own fascination with it into an intellectually charged, emotionally wrenching story about the inability of storytelling — literary, legal or cinematic — to do justice to the violence and strangeness of human experience.

The actions of Laurence Coly — the character modeled after Kabou, played by Guslagie Malanda with the tragic, piercing dignity of a Racine heroine — are not in doubt. On the stand, she admits to traveling by train from Paris with her 15-month-old daughter, Elise, to the seaside town of Berck-sur-Mer, where she left the child asleep on the beach to be carried away by the tide. The job of the judge and jury in Saint Omer, the small city in northern France where the trial takes place, is to figure out why Laurence killed Elise and to pass sentence on her.

To put it in terms more consistent with the exalted language of the proceedings, the court seeks to comprehend what seems to be a profoundly irrational crime within the rigorous light of reason. The compassionate judge (Valérie Dréville), the skeptical prosecutor (Robert Cantarella) and the openhearted defense attorney (Aurélia Petit) cite principles of psychology, ethics and anthropology as well as law.

Laurence herself, a former philosophy student who names Descartes and Wittgenstein as influences, to some extent shares in the magistrates’ spirit of inquiry, treating her own motives as if they posed an especially vexing problem of interpretation. Her account of the events leading up to Elise’s death is lucid and thorough, if sometimes contradictory, and she delivers it in measured, formal, grammatically flawless French. She also insists that the killing was the result not of her own depravity or instability, but the work of sorcerers and demons.

Laurence’s performance, if we can call it that, has a profound, unsettling effect on Rama (Kayije Kagame), a novelist and literary scholar who is attending the trial to gather material for a book. Like Laurence, Rama is a woman from an African background who has sought entry into the French educational elite. We first see her lecturing in a university classroom, parsing the emotional and moral meanings of a passage from Marguerite Duras’s “Hiroshima Mon Amour.” Unlike Laurence, whose academic aspirations ended in frustration, Rama’s career is blossoming. Her latest book is selling well, and her publisher is eager for the next one.

But something — some kind of recognition or revelation — takes place in the courtroom that shakes Rama’s understanding of who she is. To say that she identifies with Laurence would be to flatten the nuances of Diop’s observant dramatic technique, and to simplify Kagame’s seething, quiet performance. Still, the parallels between Rama and Laurence are hard to miss, for the audience as well as for Rama.

Rama is in the early stages of a pregnancy that she has kept secret from her mother. Laurence’s mother, Odile (Salimata Kamate) — who knew nothing of Elise’s existence, and whom Rama meets during the trial — figures it out over lunch, after scolding Rama for ordering too much food. She treats Rama, one of the only other Black women in the courtroom, as a confidante and a substitute daughter, to whom she can brag about Laurence’s erudition and elegance. She buys every newspaper with a story about the case, as if she were the proud parent of a spelling-bee champion.

Odile was, we can infer, a dominant, difficult presence in her daughter’s life. She has that in common with Rama’s mother, who appears in flashbacks (played by Adama Diallo Tamba) as a remote, sorrowful, nearly silent figure. Now, plagued by ill health and crippling fatigue, she is “a broken woman,” at least according to Rama’s partner, Adrien (Thomas de Pourquery). He is a musician who provides another almost-parallel between Rama’s life and Laurence’s. Like Elise’s father, a sculptor named Luc (Xavier Maly), Adrien is a white French artist, though he is more sympathetic (and much younger) than his counterpart.

Race — which is to say France’s history as a colonial power, and the uncertain present-day status of immigrants from its former colonies — is both one of the film’s themes and a part of its atmosphere. The French ideals of republican universalism, implicit in the language and rituals of the red-robed judge and the black-robed lawyers, are entangled in prejudice and custom. One of Laurence’s professors wonders why an African woman would be interested in Wittgenstein, a long-dead Austrian thinker. “Why not something closer to her own culture?”

That arrogant, insolent question ricochets toward Rama, who starts the movie contemplating Duras and later watches Pier Paolo Pasolini’s “Medea,” a rendering of Euripides starring Maria Callas. What is her relationship to those European works? And what, conversely, is Africa to her, or to Laurence?

These are hard questions, and Diop faces them with ardent, open-minded curiosity, resisting any obvious pronouncements about identity, individuality or universal values. Her main characters aren’t the embodiment of social problems or political failures, but both women undergo an emotional ordeal that is also a crisis of meaning, an existential conundrum that defies description, or even naming.

According to Wittgenstein, “whereof we cannot speak, thereof must we be silent,” and though “Saint Omer” is a film saturated in discourse, its silences are where its deepest insight resides. The pain that connects Rama and Laurence is like a secret language, an untranslatable grammar of alienation and loss. We read it in their faces.