Never in the history of Hollywood has there been a director so skilled at manipulating audience anticipation as Quentin Jerome Tarantino. Even Hitchcock never thought of making the arrival of each new film a numbered event, and Hitch thought of nearly everything else.

Once Upon a Time… in Hollywood arrives here this week after its debut at Cannes in May. It is the ninth Tarantino film – except it isn't, unless we count both Kill Bill films as one and discount his first feature, My Best Friend's Birthday, half of which got burned in the lab. 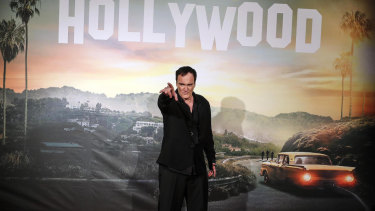 Quentin Tarantino at the Italian premiere of Once Upon a Time… in Hollywood.Credit:AP

This new one is his first film based on a real event – the Manson murders of Sharon Tate and four others in 1969 at the home she shared with Roman Polanski – except it isn't that either. The film is not quite about the murders.

Tarantino is now 56. He has been the reigning iconoclast of Hollywood for 27 years, since Michael Madsen cut the ear off that poor cop in Reservoir Dogs in 1992. That film and its more popular successor Pulp Fiction (1994) changed cinema, but for better or worse? After three decades it is now easier to see the boundaries of Tarantino's achievements, although it is still too soon to say whether he is past his prime. 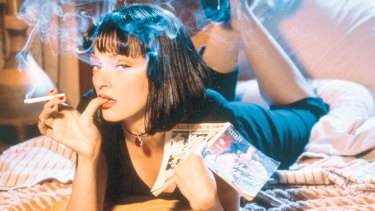 Tarantino is a disrupter. He turned narrative time on its head, dispensing with linearity. This was important because Hollywood by the 1990s was only interested in cookie-cutter scripts (and to an extent, it still is).

QT put the ending in the middle and the middle at the end and made everyone sit up and watch. He brought sparkling dialogue back to movies in a way that few could equal or copy – although everything he did, even in fracturing narrative, was a copy of something someone did before. He stole from everybody, as he admits, quoting Picasso's line that good artists borrow but great ones steal.

He put violence at the centre of his films, in a gleefully amoral way that shocked everyone. That was partly the point, but his use of violence is not simplistic. It's more like part of the American way, as with Martin Scorsese.

Tarantino is closer to the previous generation than he looks. He is not such a departure from the cinematic ambitions of Coppola and Scorsese, who were also disruptors. QT was a movie brat like them, although he probably owes more to Brian De Palma than to Spielberg or Lucas.

The great question has always been whether his films actually mean something, or whether they are simply a kind of skilful circus act, the work of a supremely gifted show-off. What, if anything, is Pulp Fiction or Django Unchained about? Is there a continuing theme to his work, or is it simply the ultimate victory of post-modern pastiche over dramatic content?

I used to think the early films were empty vessels but I'm not so sure now. There are some persistent themes, primarily the question of honour among thieves, and when honour is broken, retribution. These are what we might call the "mafia values", the idea that everybody pays for their sins. It's odd that QT's films are full of gangsters, but he has never made a mafia film. That might be because he is less interested in organised crime than disorganised crime, where plans always go wrong.

Martin Scorsese explores the dark side of America as tragedy in his gangster movies. Tarantino explores it as pageant and spectacle, largely for comedic effect. He is a gifted dramatist and his movies have been getting more serious as they go, but he can't really keep a straight face for long. His is a mad, bad, mad, bad world, in that sense.